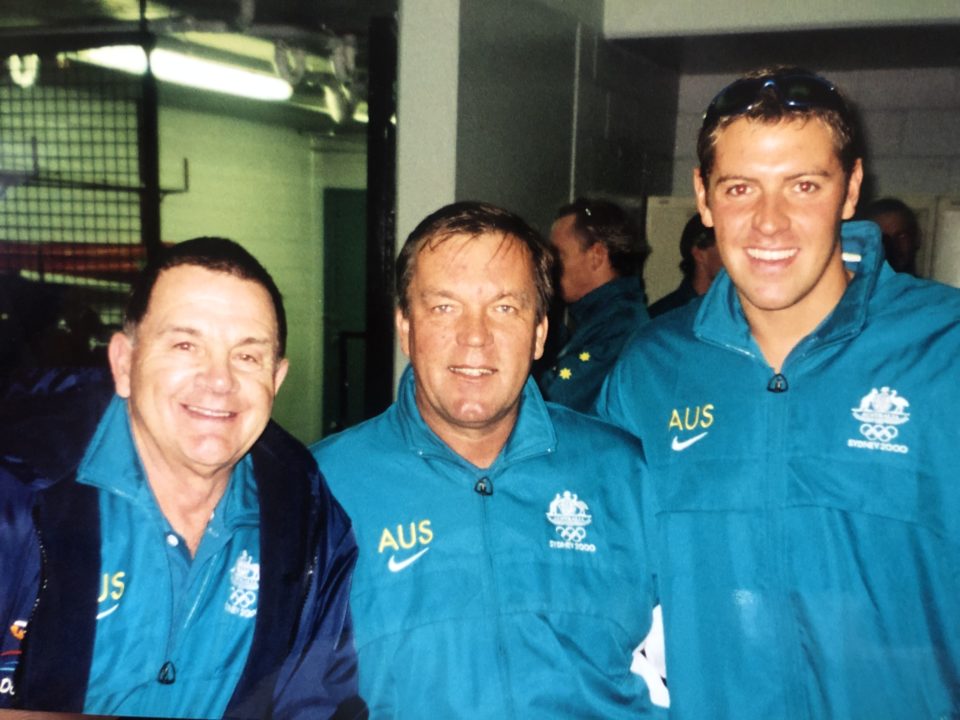 Gennadi Touretski was responsible for guiding the careers of some of the greatest swimmers the sport has produced, including Alexander Popov and Michael Klim. Archive photo via Nicole Livingstone

Russian backstroker Anastasia Fesikova has pulled out of her first ISL foray as a Toronto Titan due to a lingering shoulder injury.

Anna Hopkin made major waves at the 2019 British Championships and subsequent World Championships, earning a spot on the British Performance Squad.

Gennadi Touretski was responsible for guiding the careers of some of the greatest swimmers the sport has produced.

Names like Alex Popov, Michael Klim, Matt Dunn, Nicole Livingstone and Sarah Ryan were all influenced by his unique approach and coaching style.

Popov and Klim were perhaps the greatest beneficiaries from his knowledge and individual approach, with Klim ironically surpassing Popov’s 1994 world record in the 100m freestyle at the Sydney Olympics.

Gennadi Touretski, a swimmer himself for the USSR in the late 1960’s, earned a degree in engineering, majoring in biomechanics, biochemistry, fluid mechanics, and sports physiology.

But despite the science background, his approach was more creative than that. Working with his athletes was about sculpting the swimmer.

In Popov, he found his perfect blank canvass.

Arguably the greatest freestyle sprinter of the modern era, Alex and Gennadi focused on technique efficiency that maximised every stroke with a ‘kayaking’ principal, with the master encouraging the pupil to use all of his senses to glide through the water.

In Popov, Gennadi saw something others didn’t, from his arrival on pool deck in 1990 as an aspiring backstroker, Touretski’s instruction concentrated on freestyle.

The results rewrote the history books, as Popov went on the become the first swimmer since Johnny Wiessmuller in 1928 to defend an Olympic title in the 100m freestyle and a career that would ultimately claim nine medals across four Olympic Games, but more significantly it cemented a relationship that lasted a lifetime between coach and swimmer with Popov presenting Touretski with his Atlanta 100m free gold to medal as a thank you.

On the passing of his coach, Popov said, “There was no one more influential to my success in the pool and in life than Gennadi. Gennadi was my mentor, best friend, father figure, psychologist, sports scientist, biomechanist all rolled into one.

His philosophies and influence on the swimming world will live on through coaches not only in his mother country of Russia or his adopted homes of Australia and Switzerland but globally. I will miss him dearly.”
Following the 1992 Olympics, a plan was being put in place for continued Australian Swimming success. Australian Swimming Head Coach Don Talbot recognised that domination could be achieved by adding success in sprint freestyle and team relays.

To do so would require hiring the world’s best sprint coach.

Touretski’s move to Australia in late 1992 would set the foundations for another history making partnership.

When a 16-year-old Michael Klim joined Touretski’s squad at the Australia Institute of Sport in 1993, Touretski saw the opportunity to again sculpt a new creation.

Importantly for the development of Australian Swimming and Klim in particular, 50 and 100m freestyle Olympic champion Alexander Popov, followed his coach to Canberra.

Instead of perfecting Popov’s bent arm freestyle, Touretski encouraged Klim to try a straight armed ‘windmill’ stroke to suit his own body instead of duplicating Popov’s technique.

Three years after his Australian team debut, Klim’s ability came to the fore at the 1998 World Swimming Championships in Perth where he won a total of seven medals, four gold. As a testament to the success of Touretski’s employment, two of Klim’s gold came as a member of Australian relay teams, much to Talbot’s delight.

Included in Touretski’s AIS squad was Matt Dunn, current FINA Vice President and President of Oceania Swimming. Dunn’s success under Touretski saw him win World Championship crowns and perform world record breaking swims. “Outside of family, Gennadi is without question the most influential person in my sporting life and life in general. Gennadi always had a vision and a plan to get there which time after time delivered for his athletes and the team in general. His philosophies have shaped me into the athlete I became and who I am today and for this I will be eternally grateful. Gennadi will always be with me”.

As the new millennium arrived, a home Olympic games loomed for Australia and its swimmers.
Touretski targeted the 4×200 men’s freestyle relay and worked alongside Australian coaches and swimmers to perfect the plan.

History shows not only did the 4×200 freestyle master plan produce gold, but the 4x100m freestyle also caused a major upset, beating the USA to claim gold for the first time in Olympic history.

Klim, who will be inducted into the International Swimming Hall of Fame this year, played a pivotal role in both Sydney relay victories. He has remembered his coach fondly; “We all have that one person in our lives that has a profound impact on who we are and what we become as adults for me Gennadi was exactly that. I owe Gennadi so much not only for my achievements in the pool but for shaping me over 8 years of or time together into a man with values and knowledge to embark on live and whatever came my way in and outside of the pool.”

Australia would go on to have continued relay success on the world stage in the early 2000’s.

Ian Thorpe, arguably Australia’s greatest swimmer, reflected on Touretski’s influence over those teams of which he was a significant part; “His influence and expertise over sprint freestyle led to Australia not only competing with the best nations in the world, but eclipsing them.”

Touretski left Australia in 2002 and took up coaching in Switzerland eventually becoming their National Head Coach. The following years would see Touretski’s world come full circle with his own daughter Sasha and the son of his protégé, Vladimir Popov swimming under his watchful eye.
In late 2011, when the then retired Ian Thorpe began his return to the pool in an attempt to qualify for London 2012, he sought out Touretski. Knowing Touretski’s philosophies and his unique approach to training gave Thorpe confidence that whatever the result he would finish his career on his own terms and with a renewed love of swimming.

“I had the pleasure and privilege of knowing Gennadi Touretski from when I was 12, he looked over my early career with great enthusiasm, this led me on my return to swimming to not only have that same enthusiasm but also my love for swimming. Gennadi was a true genius, his impact has benefited many athletes including myself and his influence will continue for years to come. He will be sorely missed and I wish I had more time with him in and out of the pool.”

Whilst Thorpe failed to make the London team, his disappointment was tempered by being able to give back through another Touretski teaching moment.

As a 12-year-old swimming prodigy Thorpe was taken under the wing of both Touretski and swimming super star Popov. The significance of which was not lost on Thorpe. As he returned to the pool, in 2011 to share a lane with Touretski’s daughter and Popov’s son, the opportunity presented to return the kindness and support he had received.

Touretski’s influence extended further than male sprinters. Olympic medallist and Pan Pacific Champion Nicole Livingstone credits Touretski with extending the longevity of her career and renewing her enthusiasm for the sport; “I have such fond memories of my time with Gennadi, I joined him after already competing at two Olympics and to learn new ways as an older athlete was such a joy and pleasure for me. He was always looking for innovative ways to get you to swim faster through your feel for the water and efficiency. He encouraged us to always grow as athletes and people. Even years after my retirement he was still genuinely interested in me and what I was doing.”

Olympic gold medallist Sarah Ryan said Touretski was a motivating factor at the right time in her career; “Training with Gennadi was a pivotal time in my swimming career. He was an innovative coach ahead of his time and under his guidance my stroke changed quite dramatically (to the straight arm freestyle). He always challenged me and increased my ability to train and race at the highest level.”
There is little doubt to the reach of Gennadi Touretski’s influence on the sport of swimming. He was constantly researching new ways to move the sport forward, not just to win the next race by a touch but to progress athletes, coaches and the sport decades ahead. Putting these new methodologies into practice required enormous patience from his athletes, fellow coaches and administrators, however those that persevered reaped the rewards as the history books show now and will show into the future.
“Gennadi wasn’t just my swimming coach, he took me under his wing, believed in me and became a father figure to me and watched over me as I trained under his guidance and along side some of the greats of our sport in Alex, Matt, Nicole, Ian and many others. I admired him for his knowledge his ability to think laterally and most importantly he treated us all as individuals and had ability extrapolate our best qualities that we had to offer not only as swimmers but as people. My thoughts and deepest condolences go out to his wife Inna and daughter Sasha during this time.” –Michael Klim OAM

Submitted on behalf of Gennadi’s swimmers:

This is a beautiful piece. Says so much about what a great guy and coach he was.

I didn’t know much about Gennadi Touretski before even though I was a big fan of Popov. I never new why Popov moved to Australia for example. It’s weird but before the internet and social media I think veey few people had any awareness of the behind the scenes stuff we see more of now.