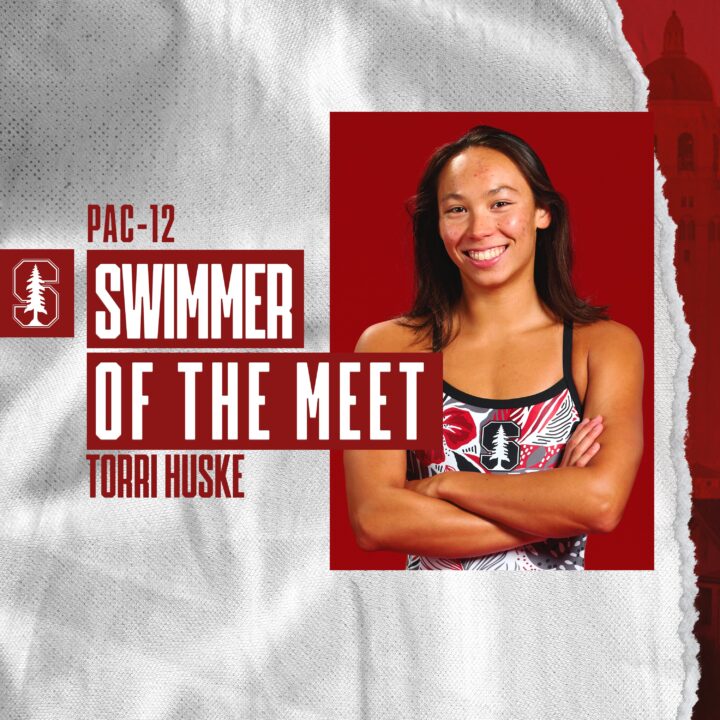 FEDERAL WAY, Wash. – For the fifth time since 2017, Stanford women’s swimming and diving is the champions of the Pac-12.

Torri Huske was named the Pac-12 Swimmer of the Meet after adding a pair of titles on Saturday night. She won the 100 free with the fourth-fastest time nationally in 47.07 for her third individual title of the weekend. Later in the night, Huske joined Taylor Ruck, Anna Shaw and Regan Smith in a winning effort in the 400 free relay to close out the championships.

Ruck took second in the 200 back in 1:49.73 – which ranks tied for third in the country – to lead a 2-3-4-5 performance by the Cardinal. She was joined by Lucie Nordmann, Samantha Pearson and Alex Crisera.

Aurora Roghair opened the night with a runner-up finish in the 1650 free in 16:01.55. Allie Raab and Brooke Forde were fourth and fifth in the 200 breast, respectively.

Every Cardinal who competed this weekend score in at least one event, while the five divers competing in Tucson, Ariz., contributed a pivotal 265 points on the weekend. In addition to the Cardinal’s relay dominance, the program won seven individual titles.

Huske and Smith combined for five titles, while Forde and Carolina Sculti each were named Pac-12 Champions in the 400 IM and 3-meter diving, respectively.

Stanford looks to add to its trophy case at next month’s NCAA Championships, March 16-19, in Atlanta, Ga. The Cardinal is seeking its first title since 2019 to conclude a stretch of three straight national championships.

100 butterfly at NCAAs should be a real barn burner.

Two or more under 49 would be historic.

Huske has really lived up to the hype so far. Great freshman season – and the big meet still to come.

Throw in NC State in there with world champion Katharine Berkoff, and you got one of the best NCAA lineups ever

and some random swimmer named Maggie McNeil or something. I’ve heard she’s good too.

We are going to see a few records but not sure from who.

Excited to see her at NC’s!!

My granddaughter’s friend Isabel Gromley swims for Stanford, was she a candidate for this award?

This is starting to get weird. Stop it.

Can you block people from commenting?

This seems rude and disrespectful towards someone. I may be wrong, but literally, every single post I have seen you put is something about a swimmer who is obviously out of form. It’s as if you are making fun of them. I really think you have got to stop, and if you are really who you say you are I am sorry.

Micha, you are so not nice! Maybe the swimmer that you are insulting was sick or injured