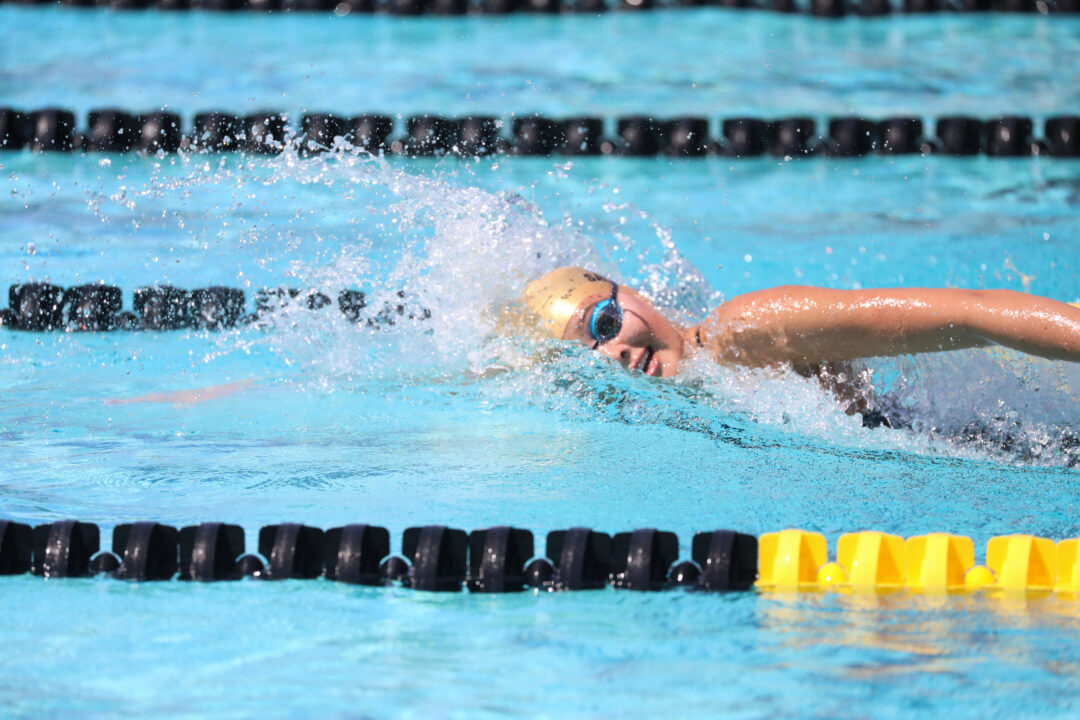 Justina Kozan, the lone senior on the team, brought it home in 48.67, getting her hand on the wall in a final time of 3:14.80.  Current photo via Abbey Liao/IG @amlxphotography

The California Interscholastic Federation (CIF) hosted its State Championships this weekend in Fresno. In tonight’s finals session, we saw a National High School Record fall. It came in the final girls event: the 400 free relay.

The record fell at the hands of Santa Margarita’s Macky Hodges, Teia Salvino, Teagan O’Dell, and Justina Kozan, who were 4 of the top swimmers in the meet. Hodges, a junior, led the team off in 49.18, blowing away her previous personal best of 49.84. Salvino, a sophomore, split 49.20 on the 2nd leg, which was faster than the 49.34 she swam to win the individual 100 free earlier in the session. Then it was freshman O’Dell’s turn, and boy, did she deliver, throwing down a scorching 47.75 split on the 3rd leg. Kozan, the lone senior on the team, brought it home in 48.67, getting her hand on the wall in a final time of 3:14.80.

Firstly, the time absolutely obliterated the CIF State Meet Record of 3:19.56, which was set by Santa Margarita in 2018. Additionally, Santa Margarita’s time came in well under the previous National HS Record of 3:15.38, which was held by Indiana-based Carmel High School from the 2015 IHSAA Girls Championships. That relay featured future NCAA stars Amy Bilquist, Veronica Burchill, and Claire Adams. The Carmel relay stood as both the National HS Record and USA Swimming Girls 15-18 National Age Group Record.

Here is a split comparison between Santa Margarita’s relay tonight and the former record-holding Carmel relay:

O’Dell was able to match Bilquist’s leg, while Kozan was able to match Adams’ from the 2015 relay. The thing that put Santa Margarita over the edge was having all 4 of their splits under 50 seconds, while Carmel had the 50.52 on the 3rd leg from Kendall Smith.

Looking to the future, this relay could threaten the record again next year, as 3 of the members return. Replacing Kozan will prove difficult, since 48.6 splits are hard to come by, but, if the other 3 members are a little faster, that will ease the burden. Santa Margarita freshman Gracyn Aquino won the ‘B’ final in the 100 free tonight with a 50.57, so she could potentially be the next swimmer up on the relay for next season.

Is St. Margarita a public school or private school??

3
0
Reply
i swim
Reply to  Buckeyeboy

I didn’t get it if it is a good or bad sign when almost 18 years old woman swims close to personal best set when she was a kid.

For those who don’t know Claire, she had a very rough 3 years. She battled injuries in late 2018 that resulted in altered training schedules in 2019 SC season. Later that year, she moved club teams to train with Dart swimming leading up to trials. Her family decided to move across the state in the middle of her dart training, which resulted in her moving to SMSC in late December. Then, the pandemic happened and California’s high school season was canceled and Covid restrictions were at an all time high. The next year (2021), she tore a part of her knee, had 2 surgeries, and was forced to be out of the water most of the fall season. The fact… Read more »

Got it. So it isn’t a maturity process that made her slower, is it?

Typical loser comment again from Yozhik. I would like to know your times, so we can pick them apart. The harshest comments usually come from a BBB athlete.

So the only judgement on teenagers allowed is “Wow! What a bright future they have ahead”. Is it? Then ask your beloved Bobo who is obsessed with following results of 10-13 years old record breakers (girls mostly) how often he was successful with his predictions. If the performance of young prodigy declines then there is a reason. And most of the time it is very prosaic. Sherry Smit gave me the explanation of no progress of Claire Tuggle. I accepted it as very possible. And that is it.
P.S. please excuse my limited knowledge of American’s slang: BBB, what does it stands for?

Dude, get over yourself and stop passing judgement on teenagers. If you can remember that far back, people judged Amanda Beard 1997-1999, made all sorts of disparaging comments and dismissed her. Hmmmm.

To think that they ONLY be a 3:17 or 3:18 if they replaced their fastest leg with their number 5. One only hopes that more teams rise to that challenge in future years

The winning time would place them at # 20 at this year NCAA right before Northwestern’s  3:14.83

I believe it’s a private catholic hs, no?

How long does this stand?

Not long considering swimming just keeps getting faster with age groupers blowing our minds every other week.

I had to take a deeper look as I watched this relay at CIF South Section finals just last week where they dropped a 3:18. Tinkering with order was huge with O’Dell’s relay start and speed. Kozan just being Kozan and hammering down the anchor well under her section split. Salvino swims under both her best previous legs and Hodges actually swims the two fastest 100s from start at the meet where she was slightly faster in relay prelims with a 49.04. Wow.

Bobo also praised young boys such as Urlando and Foster

Teagan O’Dell superstar in the making.
I’ve compared her to Missy Franklin last summer after she went 2.09 in the 200 back LCM at 14. But she has a much better breaststroke than Missy. And that’s why her 200 IM potential is huge for the future.
New best time in the 200 IM in 1.55.15
New best time in the 100 back in 52.27
And 47.75 split in the 4X100 free relay
Not too bad for a high school freshman.
Can’t wait to see what she has in store in long course next August at US junior nationals.

O’Dell has a long tripped to both school and practice since she lives in Chino Hills in the inland empire not Orange County. So, swimming is taking up a lot of time to be good at it.

I mean she has to put in more hours to be good. than other girls on her team.