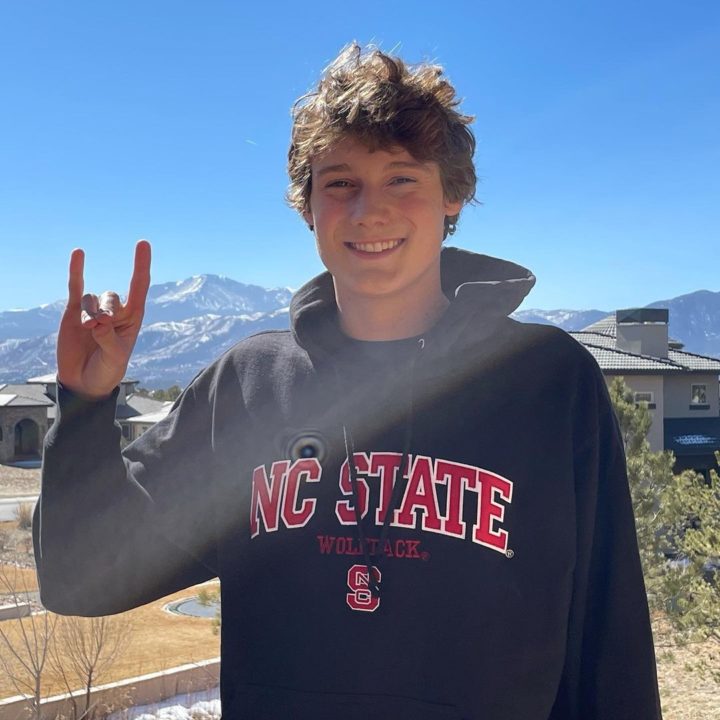 Discovery Canyon senior Quintin McCarty set a pair of new Colorado records in both the 50 and 100-yard freestyle sprints, but it wasn’t enough to overcome a deep Cheyenne Mountain squad that captured Friday’s 4A CHSAA Swim and Dive Championships despite not winning an individual event.

The top-seeded Red-Tailed Hawks avenged a runner-up performance from last year’s finals, totaling 402 points to edge defending champion Silver Creek by 30.5 points. Discovery Canyon, which boasted first-place finishes in four of the eight individual events and two of the three relays, came in third with 358 points.

Cheyenne Mountain seniors Max Roslin and Raglan Ward had the school’s best finishes with runner-up performances in the 200 IM and 100 free, respectively. Sophomore Xander Taylor also placed third in the 200 free and fourth in the 100 back while junior Ethan Carr placed fourth in the 100 butterfly. The 200 free and 200 medley relay teams, both anchored by Ward, earned second-place finishes. Cheyenne Mountain head coach Kate Doane was named 4A Coach of the Year after the win.

McCarty, an NC State commit who ranked No. 14 on SwimSwam’s list of top Class of 2022 boys recruits, brought home four state titles at his first CHSAA Championships since his freshman year. He earned 4A Swimmer of the Year honors after breaking the state marks in the 50 free (19.47) and 100 free (42.73), with both times coming in the prelims. A club swimmer for Pikes Peak Athletics, McCarty added state championships in the 200 medley relay and 400 free relay. Sizable victories by junior Adam Pannell in the 200 free and junior Taylor Wagner in the 500 free rounded out Discovery Canyon’s six titles.

“I had such a great experience,” McCarty told Gazette.com. “This was only my second year swimming for Discovery Canyon. I learned so much and this sport, I owe it all to my parents and God. At the end of the day, they’ve helped me get where I am.

“Being able to help my team was amazing. If I can make anyone around me better, then that’s the best.”

Windsor sophomore Jake Eccleston turned heads by taking home the first two state titles in school history. First he crushed the 200 IM in 1:49.46, more than 5.5 seconds faster than the next finisher, before breaking the 4A state record in the 100 breast with a 55.04. As a freshman last year, he placed third in two individual events while anchoring Windsor’s second-place relay team. Eccleston’s improvement helped Windsor to secure fifth place, three spots better than last year.

George Washington senior Xavier Hill – the only returning champion at the meet – couldn’t defend his 50 free title with McCarty in the mix. Hill did cap off his high school career with a state championship in the 100 fly, though, beating the top-seeded Pannell by more than a second in the finals. George Washington placed fourth with 267.5 points, an improvement from last year’s seventh-place showing.

10
-5
Reply
We did not Cali UT
Reply to  Breezeway

Jeesh the live results page is a mess