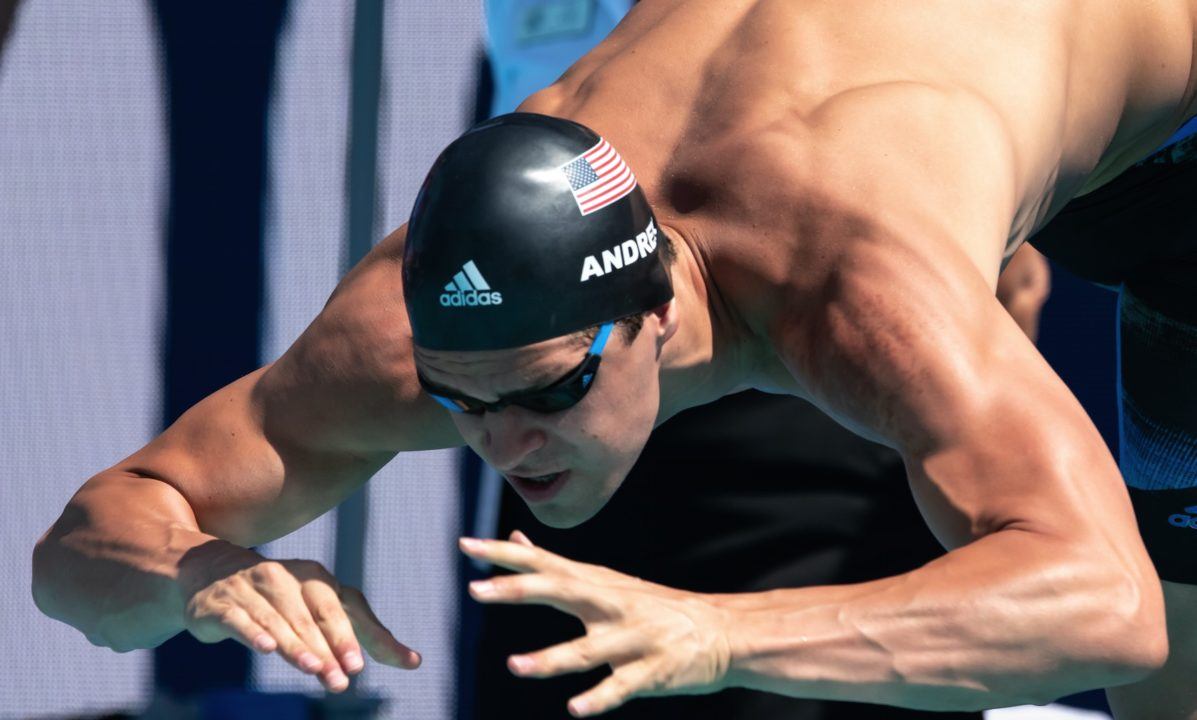 Several events had 8 or fewer participants on day 1 in Doha, which meant prelims were unnecessary. Michael Andrew's races too place, however, with the American claiming 2 top seeds. Archive photo via Mike Lewis/Ola Vista Photography

Day 1 prelims of the 2nd stop of the 2018 FINA World Cup Series kicked off this morning in Doha with just 5 events on the agenda. Although the women’s 400m free, women’s 50m back, men’s 200m back, women’s 200m fly and women’s 200m breast will also be contested tonight, there were not enough participants to field prelims. As such, the respective fields will go straight to finals.

Those looking for another Chad Le Clos/Michael Andrew duel in the men’s 100m fly were disappointed, as the South African was missing from this morning’s final. Andrew went on to claim the top seed with a solid 52.55 to represent the only morning racer under 53 seconds.

The men’s 100m breast saw Russian Kirill Prigoda snap a 1:00.50 to claim the pole position ahead of 2nd seeded Arno Kamminga of Netherlands. Kamminga touched in 1:01.01, with 2breast specialist Anton Chupkov of Russia also in the mix with a morning effort of 1:01.08.

Both the women and men took part in the 50m freestyle, with the women led by newly-minted World Cup Record holder Sarah Sjostrom of Sweden. She topped the field in 24.21, with Dutch swimmer Ranomi Kromowidjojo next in 24.78. Femke Heemskerk was also under the 25-second threshold in 24.92.

Katinka Hosszu of Hungary took 7th seed in 25.96 for her only race of the morning.

Andrew doubled up on his 100m fly top seed to also earn lane 4 in the 50m free, notching a quick 21.92 ahead of Ukrainian Andrii Govorov. Govorov touched in 22.31, while Russian World Cup Record holder Vlad Morozov is in the hunt with a casual morning swim of 22.35.

Dutch national record holder Jesse Puts took 4th this morning in 22.36, while Pieroni was back in the water after his 400m to claim 6th seed in 22.41.

This happens at most of the WC stops in the middle east. why do they even hold them there?

The power of the Orb .