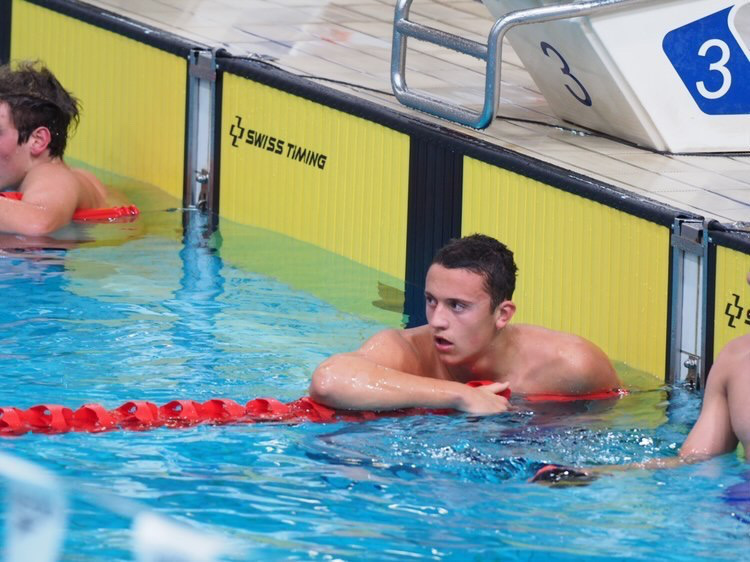 On a relay-only day at the Queensland Championships (LCM), 16-year-old Flynn Southam posted the fastest 50 free split of the field - 21.85. Archive photo via Fiona Southam

The 2021 Queensland Championships got underway at Brisbane Aquatic Centre today, with the competition marking once-banned Shayna Jack‘s return to racing.

The week-long championships also mark the first competition back for several Aussie Olympians including gold medalists Ariarne Titmus and Zac Stubblety-Cook. Tokyo teammates to the tune of 400m IM bronze medalist Brendon Smith and finalist Mitch Larkin are also expected to race throughout the meet.

For Jack, who is competing for the first time since the 2019 Australian World Championships Trials, the 23-year-old sprinter came back tonight in a golden way. Her St. Peters Western women’s 200m free relay topped the podium, with the foursome of Jack, Mollie O’Callaghan, Ella Ramsay and Abbey Harkin, posting a winning effort of 1:40.13.

Jack led off in a quick 24.63, a mark which ties her 7th best performance ever. The Dean Boxall-trained athlete owns a lifetime best of 24.38 in the individual 50m free event from April 2019.

Of note, the aforementioned Titmus was in the water as well on St. Peters Western’s ‘B’ relay. Her team finished in 4th place with Titmus splitting 25.63 as the 2nd swimmer.

For the men’s edition of the 200m free relay, it was a mixed bag of experience on the Rackley squad which took gold. 26-year-old mainstay William Stockwell led-off in 2.74 followed by 23-year-old Louis Townsend keeping the speed going in 22.07.

Impressively matching that 22.07 was 17-year-old Isaac Cooper, the young backstroke rwho competed in Tokyo in the 100m distance (12th place) and mixed medley where he earned bronze as a prelims swimmer. For perspective, Cooper’s PB in the individual 50m free is 22.82 from Olympic Trials.

19-year-old Tommy Neill, another Olympian, scored the fastest split of the squad in 22.05. He’s never before been under 23 seconds individually, although his expertise lies in the mid-distance freestyle realm.

Further down the line in the bronze medal-winning Bond relay, 16-year-old Flynn Southam busted out a monster anchor of 21.85 for the quickest split of the entire field on any leg.

22.83 is Southam’s personal best in the individual 50m free and that was without having competed at this year’s Olympic Trials. The teen wanted to tend to his mental health and opted out of pursuing a Toky Olympic bid. Southam’s potential for disruption at the Paris 2024 Olympic Games rendered the ace included in our Stealthy Six group.

Rackley once again took the top prize on the men’s medley side, with Cooper opening in 24.89, Townsend producing a time of 27.97 on breast, with Tom Jeffries at 24.42 on fly and Stockwell closing it out in 21.94. Probably because he took it easy on the third 50.

Mollie O’Callaghan shows she will be a big star of this meet by beating Tttmus in the 200 Free with a fine 1-56.51. Then wins the 17yo backstroke in an easy 61.26. She will be much faster in the Open back later, I’m sure.

well i was wrong (it’s happened once or twice before lol) with Mollie not going sub-60 as I’d expected.

Flynn clocking 49.84 and breaking one of Ian Thorpe’s records (Qld Allcomers 16Y) is a good sign for the finals to come.

Some other good times from the first morning session of heats too. Looking forward to seeing some of the kids improve their times as well as some of the stars show they are in decent form ahead of a big year for Aussie swimmers.