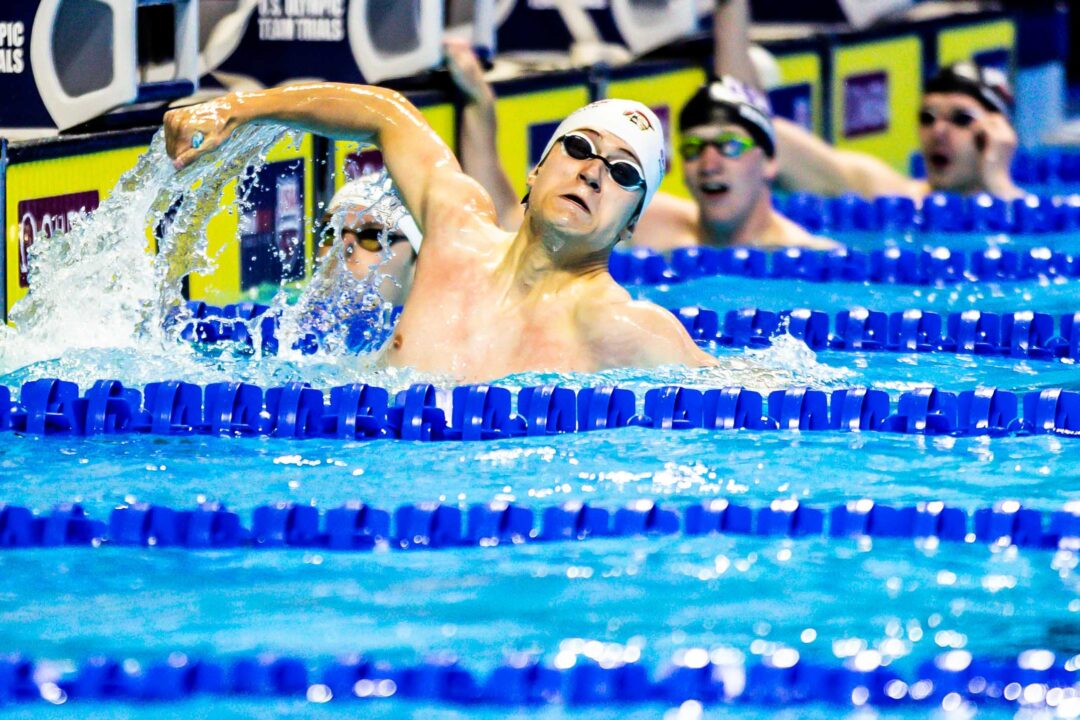 It’s a freestyle-heavy class for the Georgia Bulldogs this season, with a trio of 1:36 200 freestylers set to enter the fray and two more with potential to be there this season:

While Norton leads that deep group of 200 swimmers, none of Georgia’s 800 free relay members from last season have departed (Luca Urlando, Jake Magahey, Zach Hils and Bradley Dunham), leaving the likes of Norton and others time to continue their development early on without the pressure of being relied upon too heavily.

With that being said, Norton and Reese Branzell also have sub-44 100 frees in their repertoire, and there should be an opening on the 400 free relay.

On the sprint side, the Bulldogs also pick up local standout Peter Sacca, a member of multiple National Age Group Record-setting relays with the Spartan Aquatic Club, who is extremely versatile with bests of 47.3 in the 100 fly, 20.1 in the 50 free and 49.4 in the 100 back. The 100 fly in particular is huge for the Dawgs, given Camden Murphy’s graduation last season, and his sprint free abilities and relay experience will surely come in handy.

The class also includes breastroker Arie Voloschin, who has instant SEC scoring ability with bests of 53.7/1:58.8 (and he can sprint free, too), and Keegan Streett heads up the remaining swimmers that are full of solid freestyle prospects. Streett’s best event is clearly the 200 free, but his 100 isn’t far off reaching a high level.

One international recruit, a domestic standout and a key transfer head up a relatively small yet talented class for Michigan.

The biggest get for Mike Bottom and the Wolverines has to be Gal Cohen Groumi, a 19-year-old Israeli native that has accrued a ton of international experience so far in his young career, including making his Olympic debut in Tokyo this summer.

Cohen Groumi actually anchored Israel’s 10th-place-finishing 800 free relay at the Olympics in 1:46.41, which would project him more in the 1:32 200 free range in yards, at least with a takeover, which is huge. Michigan’s currently got a stacked group of 200 freestylers, with their entire Big Ten-winning 800 free relay returning, and with Cohen Groumi, the rich get richer. That depth should also free him up to swim the 100 fly individually instead of tackling a tough double, at least at the conference championships.

The Wolverines have also got one of our Honorable Mentions from the individual rankings in Connor Hunt, a distance freestyler that’s got a 3:50 400 IM in his repertoire.

The big-time transfer Michigan picked up is former Auburn Tiger Nik Eberly, a 2021 SEC finalist in the 50 freestyle.

Eberly’s got drop-dead speed with a 19.38 50 free, easily an ‘A’ final in the Big Ten last season, and will be a welcome addition after the departure of Luiz Gustavo Borges.

Eberly, who is coming home as a native of Drexter, Michigan, will have up to three years of eligibility remaining, and should push to be a Big Ten ‘A’ finalist in the 100 fly (46.63 PB) as well.

Stanford’s class is small but mighty, and it needs to be acknowledged that their ranking doesn’t factor in the addition of individual World Championship medalist Andrei Minakov, who is officially a redshirt freshman after deferring his enrollment last season.

The Cardinal class is headed up by our #13-ranked recruit Matthew Fenlon, who is arguably the best 200 fly prospect the class has to offer. Fenlon ranks second in the class as a whole behind #1 Aiden Hayes, though it seems like there’s a chance Hayes drops that event from his program in college, and Fenlon (1:42.5 yards time) is coming off a massive 1:57.4 swim in the long course pool this summer.

Hayden Zheng, who was bumped from #13 to an Honorable Mention this year, is a top-tier add on breaststroke, with lifetime bests of 53.0/1:54.9, which would’ve placed fifth and sixth at the 2021 Pac-12s, though both were set back in December 2019. Zheng is not just a pure breaststroke either with a 1:47.0 200 IM, giving him three events to key in on in college.

This year’s recruiting class as a whole has several elite swimmers entering the NCAA ranks from Israel, and Stanford’s got a good one in Ron Polonsky, who is coming off of tackling three individual events at this summer’s Olympic Games.

Needless to say, he’s versatile, and his breaststrokes convert to 54.0/1:55.7, the latter of which would be fifth at last season’s Pac-12s. His potential in the 200 and 500 free, which convert to roughly 1:35.2/4:19.6, make him a potential addition to a future 800 free relay and the ability to race outside of the breast and IM events at various dual meets.

The Tigers bring in three swimmers that ranked in the top 20 of our re-rank this year, and they’ve picked up a total of four high-end recruits from the neighboring state of Georgia. The additions give new head coach Ryan Wochomurka a nice boost entering his first campaign.

#14 Henry Bethel and #15 Jacques Rathle jumped up to those positions after being left out of the top 20 as juniors, both coming off phenomenal seasons with similar event specialites.

Rathle, a Thibodaux, Louisiana native, is also a high-end medley swimmer, having progressed down to 3:45.90 in the 400 as a senior, putting him within two seconds of the class’s best. He also has a 1:46.4 200 IM, plus 54.4/1:58.6 breaststrokes and 1:35.6/4:23 freestyles. Both free events in particular improved by a landslide last season, projecting him to be a valuable 800 free relay contributor in future seasons, if not right away.

The third Auburn recruit ranked in the top 20, and the only one of the three that was also featured there as a high school junior, is Spartan Aquatic Club sprinter Nate Stoffle.

Stoffle, who will be joining older brother Aidan with the Tigers, immediately becomes the team’s best 100 backstroker with his PB of 46.63, and he’s right at the top of the squad with his 1:43.51 200. Similar to his club teammate Peter Sacca, Stoffle is a clutch relay performer, including having split 19.5 on a 200 free relay, with his flat-start best sitting at 20.0.

Once a revered sprinting school, Stoffle will be relied upon to contribute right away to Auburn’s 200 free relay, with their top 50 swimmer from last season, Nik Eberly, transferring to Michigan.

But outside of the top three, the other swimmers Auburn managed to pick up are also very strong.

Add Mathew Sates to the mix and UGA easily has a top 10 class coming in. But, let’s be honest, it’s all about the SECs and NCAAs. Top three in the end… knock, knock, knocking on Texas’ door. Go Dawgs!

Sorry. Too biased. No way they beat Texas, Cal, NCST or ASU. Georgia doesn’t have a stud breastroker. And their relays aren’t podium contenders especially since Javi and Murphy declined the 5th year.

Yeah does UGA have a breaststroker under 53 on the roster this year? I guess with Sates there in the spring you could go Urlando-BR-Sates-Downing but that 2nd leg would just take them out of any race against some of the top teams in the SEC and NCAA

How is Minakov a officially a red-shirt freshman if he deferred enrollment. Don’t you have to be on the team to get a red-shirt. NCAA gives a one year grace period/ gap year after high school graduation before the clock starts. He’s just a freshman. Should have 5 to complete 4 like anyone else unless I’m missing something.

SwimSwam’s point is that the gave Stanford ‘credit’ for Minakov last year, so since he deferred they aren’t counting him again in the rankings

What teams are missing so far? (top 8)

NC State
Texas
Cal
Indiana
Arizona State
Virginia
Virginia Tech
USC
Seems like an oversight for Alabama to be left off everything with Kaique Alves, Charlie Hawke, Gil Kiesler, Mateo Miceli, and some strong others in a pretty solid class. Would have thought they’d at least be HM unless they somehow show up at number 8

Interesting – probably will come down to Bama or VT for the last spot. I haven’t heard much about VT’s 2021 class but I agree, I also would’ve thought they/bama would at least be HM.

Bama got Lio Perez too, right?

He signed there, but isn’t on their roster. We’ve reached out to see what his plans are going forward.

From what I’ve seen, 2 signees pulled out of Bama (Lio Perez and Braden Rollins). Looking at Braden’s Instagram, he decided to enlist in the military and skip college. Not sure on Lio. But Kaique Alves apparently committed late in the summer. Guessing that some of that freed up money let them go after him? Alves, Bondra, and Hawke should be big international newcomers for the tide this season

Matt sates is going to mess up the NCAA’s!!

Spartans Aquatic Club is a speed factory! Producing lots of solid swimmers for such a young team

Well they got most of them from Swim Atlanta and Gwinnett

1:58 long course IM to a 1:45 short course is the most laughable conversion I’ve seen.

Yeah I thought that too… hope that’s a typo?

Well that conversion didn’t age well. Bloke went 1:40 at conference, slated for a 1:39 at NCAA.

Matty Sates is going to be at UGA in January, that alone makes the class better

Jacks new focus on academics seems to be paying off