Our Picks For the Big Splash Race of the Year Award 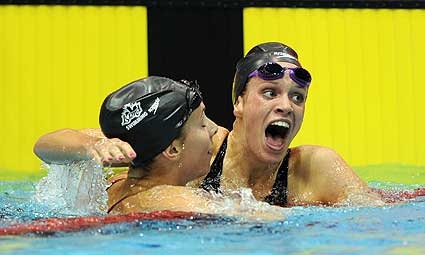 As a self proclaimed expert on Canadian swimming, I get extremely excited every time the Big Splash Awards come around. Usually, Canadians remember the odd standout swim here and there such as one from Ryan Cochrane or Brent Hayden, but this year Canadian swimmers had a much better year than anticipated. Last summer in Barcelona, six Canadians individually qualified for finals, all three women’s relays made the finals, and the Canadians came home with a bronze from Hilary Caldwell, a bronze and a silver from Cochrane, and a silver from Eric Hedland.

A performance like that might not seem to be all that much to a swimming power-house like the States (I straddle the border, as my dad is an American, and reminds me of it constantly), but it’s definitely a step forward for the Canadian national team. Just a year earlier at the 2012 Olympics, the Canadians came home with three medals. One was courtesy of long time Canadian veteran sprinter Brent Hayden who retired before the 2013 World Championships, one was won by Richard Weinberger in the open water 10K race, and the other by Ryan Cochrane in the men’s 1500. Four individual Canadians qualified for finals in 2012 as opposed to the six in 2013. Of those six, three were first time finalists on an international level as well. Only two relays made the finals in London, the men’s 4×100 medley and the women’s 4×200 free.

With a great year for Canada built on the backs of a very young women’s roster, three athletes were nominated for the Big Splash Race of the Year from the World Championship team. Ryan Cochrane’s silver medal performance in the 1500m freestyle was nominated, Eric Hedlin’s 5K open water silver was nominated, as well as Hilary Caldwell’s gold in bronze in the 200m backstroke. All are clearly great performances, but Ryan Cochrane being an almost guaranteed medal contender for Canada at every international meet probably does take the cake for popularity.

Every since Cochrane burst out onto the international scene in 2008 after winning the bronze medal in the 1500m freestyle behind Australia’s Grant Hackett at the 2008 Beijing Olympics, Cochrane has medalled at every single major international competition in the event. He’s won silver in the 1500 at the 2009 worlds, 2011 worlds, 2012 Olympics, and the 2013 worlds. Clearly, Cochrane is sick of silver and made that clear, but to win the gold at future meets he’s going to have to take out China’s Sun Yang who broke the world record in the event at the 2012 Olympics. During the race at worlds, Cochrane held the lead throughout the race until the last 100m when Yang exploded to pass him over the final 100m and take the gold. Cochrane put up an amazing fight and ended up taking the silver to Yang in 14:42.48. I think this was an incredible display of heart from Cochrane, but due to the fact that he’s been faster on two occasions, not the race of the year.

Hedlin qualified to swim this event at world by placing 16th at a FINA World Cup event in April. Going into this race, I would not have called it that Hedlin would medal. Hedlin made sure to put up a fight and was in a battle with Tunisia’s Oussama Mellouli and former World Champion Thomas Lurz. Hedlin ended up being passed by Mellouli during the sprint, but beat Lurz to the finish lane to secure a silver medal. An amazing showing of determination puts this race in contention for the race of the year in my mind. The fact that Hedlin had never seen major international competition before this event only sweetens the deal.

Canadian Paralympic swimmers also had quite the year, bringing home a slew of hardware from the 2013 IPC World Championships in Montreal. With seven swimmers coming home with medals as well as one silver medal relay, swimming Canada nominated Benoît Huot, Brianna Nelson, and Valerie Grand’Maison for the Big Splash Race of the Year category.

Huot is no stranger to international competition. Huot has medalled at every single Paralympic Games since 2000, racking up a grand total of 19 Paralympic medals spanning four Paralympic Games. Huot grabbed the gold in 2:10.34, splitting a great breaststroke leg. Huot was just off his best time, and that factor makes me believe that it was a good race for the Paralympic veteran, but not the race of the year. Huot’s talent is incredible, but he has definitely shown better performances during his legendary career.

Brianna Nelson came home with the gold medal in the 50m fly at the 2013 IPC World Championships along with a new best time of 35.70. Nelson won the silver at the 2012 London Paralympics during her Paralympic debut. With a 0.33 second drop in time as well as coming back after a Paralympic year to improve herself and win the gold medal, I would definitely put Nelson as a possibility for the race of the year. Being a young swimmer, Nelson could potentially be a serious international contender for many years to come in the fly.

Grand’Maison came home from the IPC World Championships with three golds and a silver. At the 2012 Paralympic Games Grand’Maison won two silvers and a gold, thus improving her record this year. Grand’Maison had the highest medal tally overall of any Canadian Paralympic World Championship team member, but her greatest performance came in the 100m fly. Grand’Maison took off a grand total of 1.53 seconds to take home the gold medal in a swift 1:06.73. Given her incredible performance as well as the fact that she came home with the highest medal count of any swimmer, para or not, it’s likely that she is one of the top contenders for the race of the year award.

With so many strong performances, it’s hard to pick just one. Every single performance was outstanding and deserves recognition amongst Canadians. My vote however, would have to go to Hilary Caldwell because of the fact that she was able to step up, break the Canadian national record three times in one meet, and race some of the biggest names in swimming to earn her bronze medal. With a performance like that, it’s hard to top it.