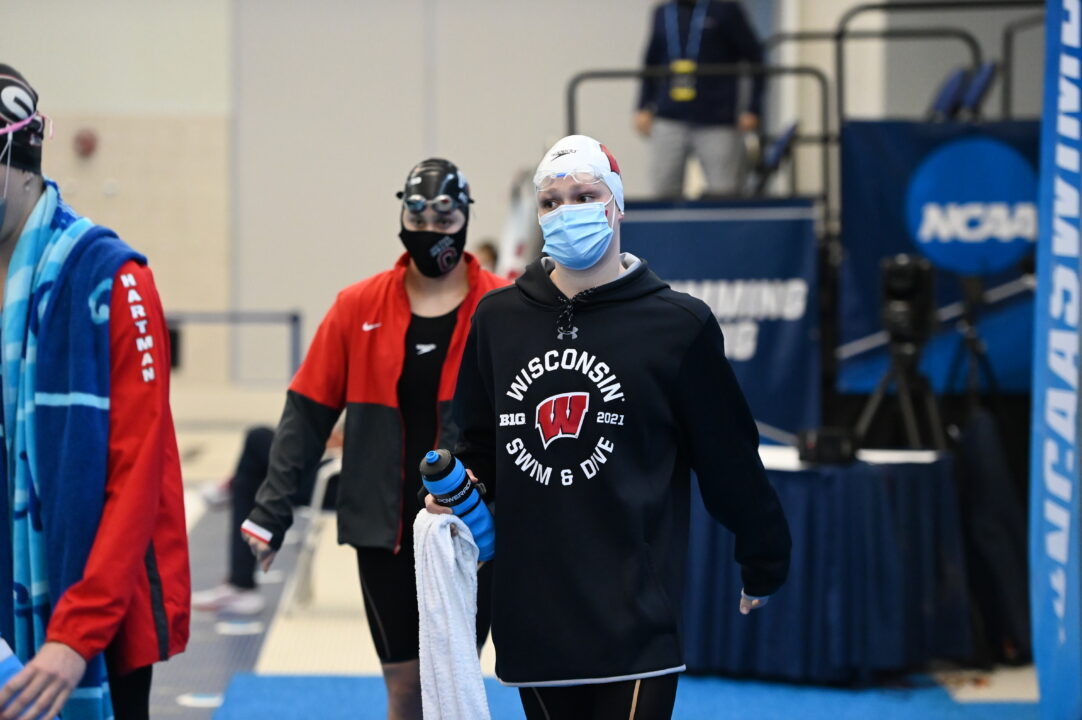 Wisconsin freshman Phoebe Bacon earned her first NCAA title tonight with a 1:48.32 victory in the 200 back, moving to #2 all-time in the 17-18 age group. Current photo via Courtesy of the NCAA

Wisconsin freshman Phoebe Bacon earned her first NCAA title tonight with a 1:48.32 victory in the 200 back. Coming into today, Bacon’s best time was a 1:50.71 from 2019, when she was still 16 swimming for Nation’s Capital. She went 1:50.90 at last month’s Big Ten Championships before setting a new lifetime best of 1:50.32 in this morning’s prelims.

Tonight, Bacon parlayed a strong back half into a win, with that time moving her ahead of a bunch of big names on the all-time 17-18 rankings. Bacon’s swim tonight moves Missy Franklin (1:48.42) from 2nd to 3rd in the age group, and means that only Regan Smith has been faster in the age group, with her time of 1:47.16 from 2019, which also stands as the fastest time ever in the event.

The USA has a deep roster of backstroke talent, and that was evident tonight as four of the top five spots were held by freshmen: Cal’s Isabelle Stadden (1:49.66), Virginia Tech’s Emma Atkinson (1:50.43), and UVA’s Reilly Tiltmann (1:50.66). Tiltmann is also 18, and her time tonight puts her just outside the top ten performers in the age group.

The rest of the A-final consisted of a sophomore and three juniors, and with the whole A-final returning next year, plus Smith swimming for Stanford next year after deferring her enrollment for a year, and the 2022 NCAA battle in this event should be one for the ages.

I think somebody has to eat their goggles now

My gut says Bacon is the slight favorite for the second spot in the 100 at Trials. I would have Smith, Bacon, Baker, Smoliga (with Baker making the team in the 200 back/IM and Smoliga snagging a 4×100 free spot).

Jesus the US 100 back is just so stacked. Curzan’s gonna be up there too. It’s a shame that some of these ladies are gonna be left home

Anyone in the final in Omaha has a chance at an Olympic spot, just like the men’s 100 free. This is gonna be a fun/heartbreaking meet

My gut says you’re right but Beata will be in the mix there too. The training group Yuri has going in Madison is scary.

No. Beata will not be in the mix. She has never been in the mix in a long course pool. Not even close. Give credit where it’s due. And it’s not here.

This is the first year where she has consistently had a long course pool to train in along with a solid training partner in Phoebe. I think she could surprise some people, but don’t count her out so quickly.

There’s a lot of space between those turns.

Next year will be absolutely insane.