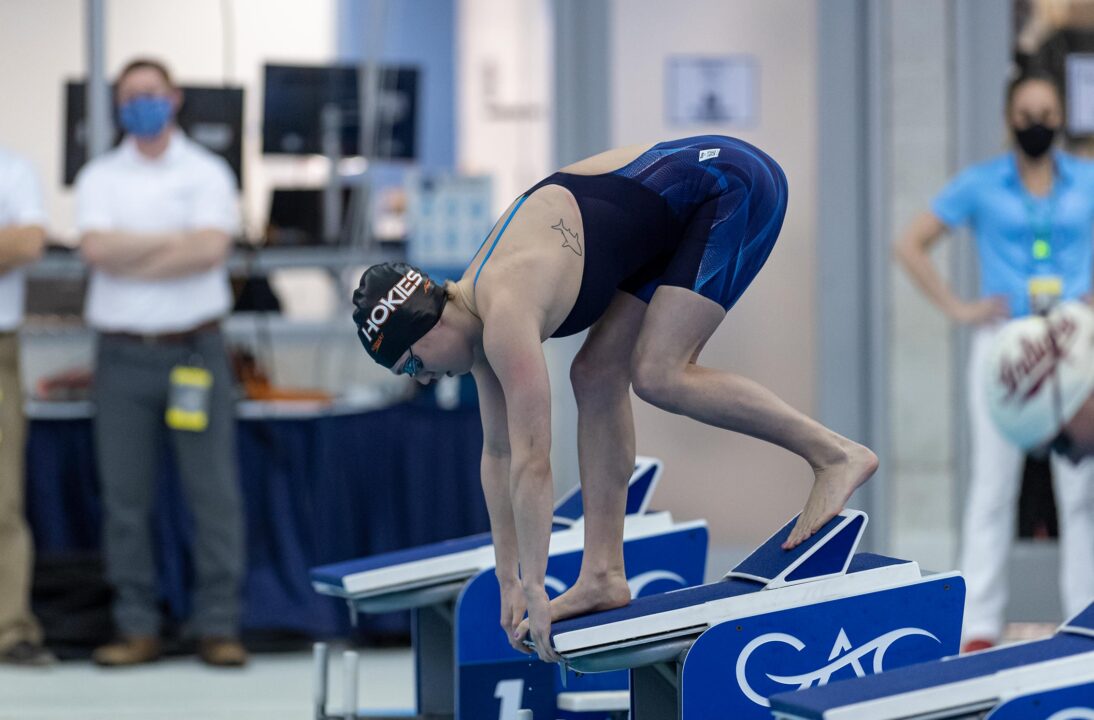 The 19-year-old freshman placed fourth in the 200 back, equalling Jessica Botzum's 200 breast in 2007 for the highest finish in Virginia Tech history. Current photo via NCAA

Freshman Emma Atkinson etched her name in Virginia Tech history on Saturday night at the 2021 Women’s NCAA Championships, tying the highest finish at the national meet by a woman in program history.

Atkinson placed fourth in the 200 backstroke final in a time of 1:50.43, equalling the finishing position of former Hokie Jessica Botzum at the 2007 NCAA Championships in the 200 breaststroke.

Atkinson’s time also marked her second VT school record and personal best on the day, having lowered her mark of 1:51.64 (set at ACCs) in the prelims down to 1:51.47 before taking a full second off of that tonight.

The 19-year-old’s swim was one in a handful of standout freshman in the 200 back, as four of the top five finishers were all first-years, led by national champion Phoebe Bacon of Wisconsin (1:48.32).

Great swimming by Emma. It’s nice to see a big drop in her 2 back!
She has has some good coaching, finally.

What is that supposed to mean? She had great coaches in high school- we’ve seen that throughout her high school career making significant drops. She’s in college now with new training and obviously that training is working for her, but also building off of her training in the past.

emma is my idol

Congrats to Emma on a tremendous NCAA meet! Her club and high school coaches at Germantown Acacemy, Jeff Thompson and Donny Brush, and Sergio and his Virginia Tech staff have done an awesome job of developing her talent.

Love this comment!! Not an indiana one for once 🙂

Get a great freshmen and don’t improve his time for the upcoming years. Truly a Sergio move!

not really sure about that…he’s coached many great athletes so i don’t think that will be the case here. everyone hates sergio because everyone is scared of what he can do.

you do not rise to that level by being nice, part of the game, we just rarely hear about it and then crucify those who few who get called out

I don’t understand this comment. Emma was 1:53.0 out of high school and went 1:50.4 tonight. That’s a pretty stiff improvement.

I don’t understand the Sergio hate. If you had ever met him, you’d know he’s someone who cares about his athletes. VT has had a lot of “firsts” thanks to him and his staff.