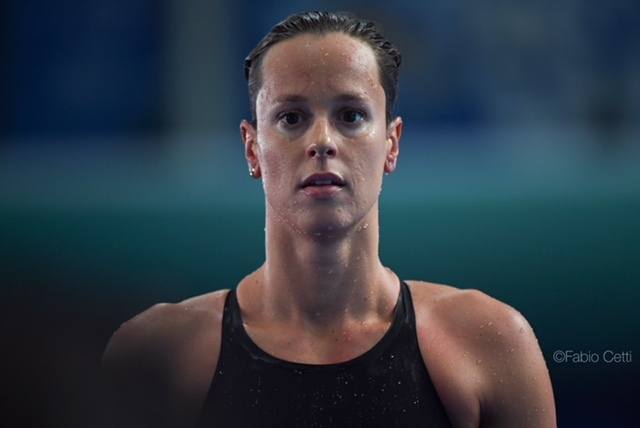 30-year-old Italian swimming icon Federica Pellegrini continues to impress in an event the freestyle ace had sworn-off at one time. The women’s 200m freestyle saw the prolific face of Italian swimming power her way to a near-season-best effort of 1:56.98 while competing on day 1 of the Trofeo Dei 100 Anni in Trieste, Italy today.

The 2-day meet consists of just timed finals, so Pellegrini put the pedal to the ‘medal’ in her one appearance, clocking her 1:56.98 time to beat out the field by well over 6 seconds. Her time fell within half a second of the 1:56.60 she put up for gold at last month’s Italian National Championships in Riccione. That time remains in the #7 slot among the fastest in the world this season.

16-year-old Giulia D’Innocenzo did damage today as well, reaping 2 golds. The teen first took the women’s 50m fly in 27.85, beating out runner-up Claudia Tarzia by just .10. D’Innocenzo then took on the women’s 200m back, where she logged 2:16.61 to obliterate the field by over 17 seconds for the win.

Dual citizen Sebastion Sabo was listed as representing Hungary at this meet, although he holds Serbian swimming records. Sabo won the men’s 50m fly in  23.84, the only sub-24 second outing of the field. He’s already ranked 3rd in the world with his time of 22.99 from March.

Sabo also was victorious in the men’s 50m free, where he pushed a time of 22.89 to represent the only sub-23 man of the timed final today.

Additional winners included Laszlo Cseh in the men’s 200m IM, with his pedestrian (by his standards) 200m IM effort of 2:03.88, followed by 16-year-old Dylan Buonaguro hitting his stride right behind in 2:03.89. Buonaguro won the B-Final in this event at the aforementioned Italian National Championships in 2:03.27.

The meet continues tomorrow with both a morning and afternoon session of timed finals.

It’s truly amazing to see legends like Cseh and Pellegrini… who came up when things like 15m underwaters, tech suits, modern breaststroke pullouts, etc, were either in their infancy or non-existent…. continue to compete and win into their 30s against an ever expanding pool of young talent in a sport where the number of participants has exploded since the 90s and 00s…as has the knowledge of training techniques, weight room incorporation and nutrition. Obviously the same goes for Adrian, Tony Ervin, the Iron Lady, etc…

Do you know that the best attempt in 200free among Italian swimmers besides Pellegrini during last 20(!) years is only 1:57.37?
No “things like 15m underwaters, tech suits, modern breaststroke pullouts, etc” will help if there is no such a talent.

I wish I could “retire” from an event this well!

I know people are all saying how Ruck, Titmus and Ledecky are going to be the stars of the show in the 200 free but I do think Pellegrini’s got to be hungry for a medal. It would be her 8th time in a row medalling in that event if she got a medal.