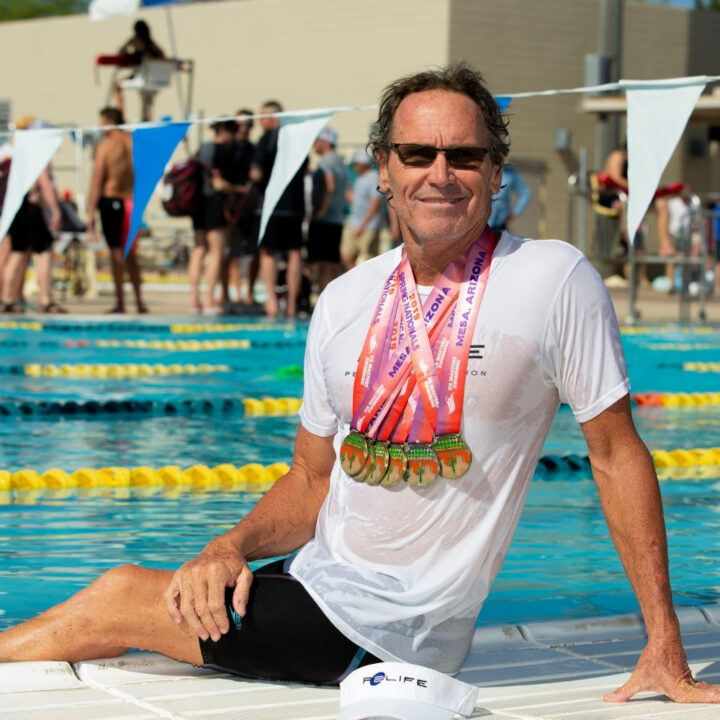 Swimming in the 70 + age group,  Tim added both the 100m and 200m Breaststroke world records to the 50m WR he smashed earlier in the meet, making it a clean sweep of all 3 Breaststrokes.

In the 100, Tim was the first in history under 1:20 breaking the world record of Olympian Peder Dahlberg, the multi time NCAA All American who captained the 1971 Indiana NCAA Championship team under legendary Hall of Fame Swim Coach Doc Councilman.  Tim’s 1:18.41 dropped 3.5 seconds off Peder time of 1:21.98.

Tim commented that after the breaking the 50 world record it gave him the confidence he could also take the 100 and 200.  While ecstatic he also admits he must also finally come to terms that PB’s are in the rear view.  Noting that in Masters and as we age,  “Whoever slows the slowest – WINS”

He encourages all swimmers to keep going.  Having never even been fast enough to qualify for an NCAA championship must less been an NCAA All American or Olympian, for over 20 years now Tim has been a dominant force in Masters Swimming.  Even when he started in Masters he never won for roughly 20 years.  But he also kept swimming faster and faster each year.  His Lifetime best times were at age 55 when he won all 6 races in 6 WR at the 2008 World Masters Champs in Perth, Australia.  His 1:11.04 in the 100 breast stood for a decade.

Best Times at 55 years of age! He says that due 100% to knowing the value of Nutrition to performance, which of course also indicates overall health.  His motto, “The human body is an amazing organism, feed yourself correctly and you will be amazed as to how good you will feel, and how well you will perform”.  It definitely works for me, and now thousands of others.

Tim laughs as he jokes that in the past 20 years, just about the only swimmers that have beaten me are those also taking P2Life.  He laments with a smile, “I should have never told them about P2Life, given up my secret”.

In fact, P2Life is well known in Masters swimming where athletes with a long history of taking P2Life dominate the USA and World Records having set well over 825 world records.

P2Life has also been the secret formula for many Olympians, especially US and South Africans, many of whom are Olympic Gold Medalists and World Record holders.  Tim laughs they have been smarter than I was, not wanting us to name them, keeping their advantage a secret.

But still and especially more recently P2Life is becoming much more well known in age group, collegiate and Olympic swimmers with standout young up and coming swimmers such as Olympians Matt Sates, Caspar Corbeau, Patrick Callan and Katie Grimes all coming out stating they too have been on P2Life for several years.  We wonder how many more swimmers are on it that we are not aware of.

Tim is well known to SwimSwam. He founded P2Life Nutrition which is the only Nutrition company Swimswam has ever and continues to strongly endorse. SwimSwam has had a partnership with P2Life for many, many years for a few key reasons. We respect Tim’s swimming roots and passion for the sport, and that he’s formulated P2Life for swimmers.  In the words of Mel Stewart, Swimswam co-founder,  “SwimSwam’s been around a long time and we don’t work with any other performance nutrition company. We don’t because it comes down to trust, and it comes down to respect, and it comes down to us doing our research with the biggest minds in swimming and leadership. And, the elephant in the room is that a lot of athletes take supplements and they test positive and they run afoul of WADA and USADA and it is a traumatic, traumatic moment and so with supplements and companies who sell supplements and athletes who take them it’s always a big concern. I have not had that problem or that concern because P2Life does it correctly.”  P2Life has an independent 3rd party company – BCSG – test every batch of products they make.

I’ve mentioned another athlete in the other P2Life article that has been taking the P2L recovery powder since he was 16..he’s been the cover of swimswam magazines for almost a decade now…IMO the best American swimmer in the past decade tied with Caeleb.