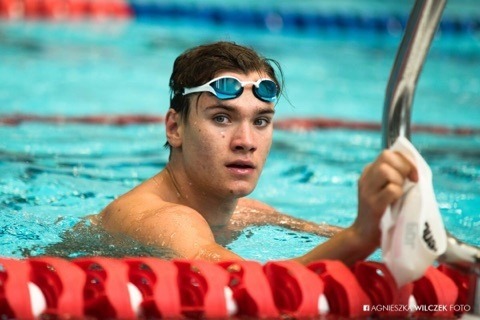 Breaking his second NCAA record of the weekend, Drury's Karol Ostrowski took down the 100 free record held by Marius Kusch.

Just two days after he broke the NCAA Division II record in the 50 free, Karol Ostrowski of Drury University reset another NCAA record, this time in the 100 free. Ostrowski touched the wall in 41.50, sliding under the previous record of 41.73 held by Queens University of Charlotte’s Marius Kusch.

Kusch’s record was set in March of 2019 at the NCAA Division II Swimming and Diving Championships at the IUPUI Natatorium. He won that year’s NCAA title by almost a second and a half, with Florida Tech’s Victor Rocha Furtado finishing in 43.07.

A post shared by DRURY PANTHERS SWIM AND DIVE (@druryswimdive)

Ostrowski is in his first year of competition with Drury. After originally committing to Florida State’s freshman class of 2018, he elected to wait until this season to begin competing in the NCAA.

While, at 21 years old, Ostrowski is older than the traditional freshman, he is still younger than both Kusch and former NCAA record holder in the 50 free, David Lambert. Kusch was 25 when he set the NCAA record in his senior year, while Lambert was 24.

In addition to his two NCAA records, Ostrowski also competed in the 100 back, as well as swimming on four of Drury’s relays. In the 100 back, Ostrowski finished in 46.84. That time would have ranked third in Division II last year.

Of the four relays he was a part of, the most impressive was the 200 free relay. The team of Ostrowski, Alex Bowen, Oleksii Khnykin, and Kham Glass finished in a time of 1:18.49. This time would have been the second-fastest in the country last season behind McKendree, as well as only 1.22 off of the national record. Ostrowski led off the relay in a time of 19.40.

Since his arrival on campus this fall, Ostrowski has been having a stellar season for the Panthers. Despite only having two short course yards competitions under his belt, he has already reset two NCAA records and four school records.

The SMU vs. Drury meet was swum as a three day, prelims-finals meet, with men and women competing during separate sessions. The meet was held over the same weekend that traditionally holds the SMU Invitational, with last year’s edition of the meet featuring SMU, LSU, Missouri State, TCU, Incarnate Word, Fresno State, and New Mexico.

Looking at the progression I wouldn’t say elite.

Kham Glass went from a 46 in high school to a 43.9 last week. I would call that pretty good progression.

I know Dressel has changed a lot but 41.5 and 19.0 are worth putting in the article title. Anytime anyone dips under 42, its worth noting.

He’s 3 years younger than the American man whose record he broke in the 50 free.

He just turned 21. That is a perfectly normal age for a college swimmer and 19.09/41.50 is extremely impressive for any swimmer of any age.

CSMF. Somebody out there from Drury will know what this means.

Wow, fast times. Watch out for him.

Is this the fastest time in the country this year? Across all divisions

Also known as “The Michaelson”.

Ben Michaelson. Southern CT State! The man, the myth, the legend. Waiting for the ESPN 30 for 30 to be made about Ben!

Further: Michaelson’s records lasted a pretty long time! First to go was his 50 free to Andrey Seryy and 200 fly to Jay Kim, and I believe his 100 fly lasted ’til Matt Josa.

To be fair, it should be pointed out that Michaelson developed to that level throughout his time at SCSU