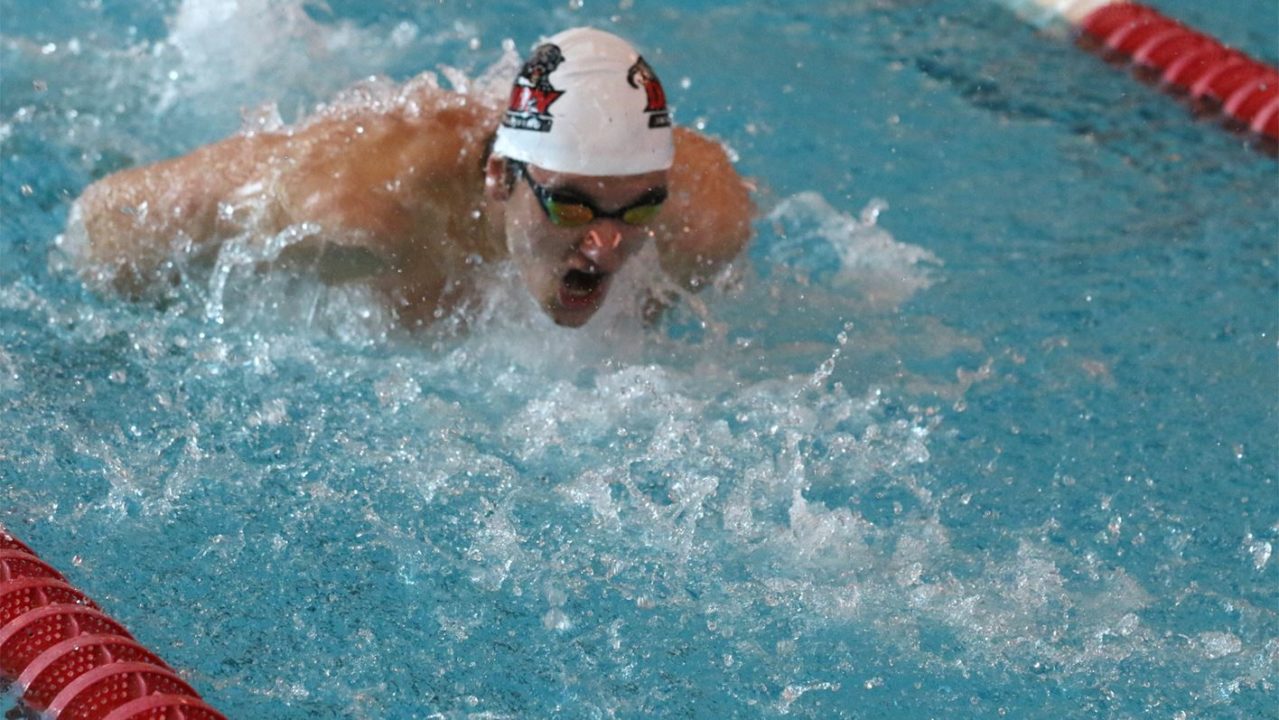 Lambert swam that time at the Texas Invitational, notably beating out names such as Santo Condorelli and Joseph Schooling to win the event at the meet.

A post shared by DRURY PANTHERS SWIM AND DIVE (@druryswimdive)

Ostrowski’s swim came during a session in which he had two other races, the 200 free relay, and the 400 medley relay. In the 200 free relay he swam the leadoff leg in 19.40, helping his team to finish in 1:18.49. The relay set a new Drury school record in the event, becoming the first relay at the university to swim under 1:19.00. He later added a 42.73 anchor leg on the school’s 400 medley relay. The relay missed the school record by just .20.

Ostrowski has been having a breakout year since joining Drury this fall. Earlier this month, in his first short course yards meet, he set Drury’s school record in both the 50 free (19.48) and 100 free (42.69) when his school hosted Lindenwood for a dual meet.

The Polish-born sprinter, despite having just joined a college team, initially committed to competing in the NCAA three years ago, in 2017. He initially gave his verbal commitment to Florida State University for their freshman class of 2018, before deciding to join Drury this year.

While at 21-years old, Ostrowski is older than the traditional NCAA freshman, he is still 3 years younger than Lambert was when he swam 19.17 at age 24.

The dual meet is being held in a three day, prelims-finals format, with the men and women having separate sessions during the meet. The meet is being swum on the same weekend that the SMU Invitational was last year. Last year’s meet featured SMU, LSU, Missouri State, TCU, Incarnate Word, Fresno State, and New Mexico.

Isn’t that guy 28 years old or something? What is he doing still swimming in college?

5
-12
Reply
JP input is too short
Reply to  Mytwocents

DII doesn’t have the same age rules that DI has. I swam next to a 31 year old in the 200 back at NCAAs my freshman year. I’m finally older than he was now, a decade later…

Are you sure about that? I mean, I know that some schools have had older swimmers, but how exactly? In this article, this guy was supposed to go to FSU in 2018, but now is at Drury. If he was supposed to be a freshman in 2018, why is he a freshman now? Clearly he was swimming every year up to this point, so how is that possible that he gets to delay his freshman year two full years? Kids from the United States can’t do that.

There are tons of exemptions that result in swimmers at both the DI and DII level being older than the traditional US NCAA swimmer. These exemptions are absolutely available to US kids, but they don’t get a lot of use.

4
0
Reply
JP input is too short
Reply to  Spiderfrommars

Yeah, kids from the US that go D2 can do that. I know several guys that took a couple years off of swimming after high school and decided to give college swimming another try in D2.

As long as someone enrolls full-time for at least one semester in a university (any university around the world) within roughly 1 year of high school graduation (actually a little longer, i.e. if they graduated June 2020 they have until Aug 2021 to enroll after their “gap” year), and then leaves said university, essentially their clock “freezes”.

There’s also a major loophole that says if all meets competed in after the “gap” year are either a) representing the national team, or b) a qualifier for the national team….then the clock never started. Lots of federations basically take any meet times as a possible “qualifier” for a national team, and so…you see situations like this.

Who cares how old he is anyway, if he’s maintained his amateur status and met all the other criteria? I remember some years ago, there was a 60-year old guy on some small college football team.

Thanks for your curiosity tho!

That sprint group at Drury is extra spicy right now 🔥