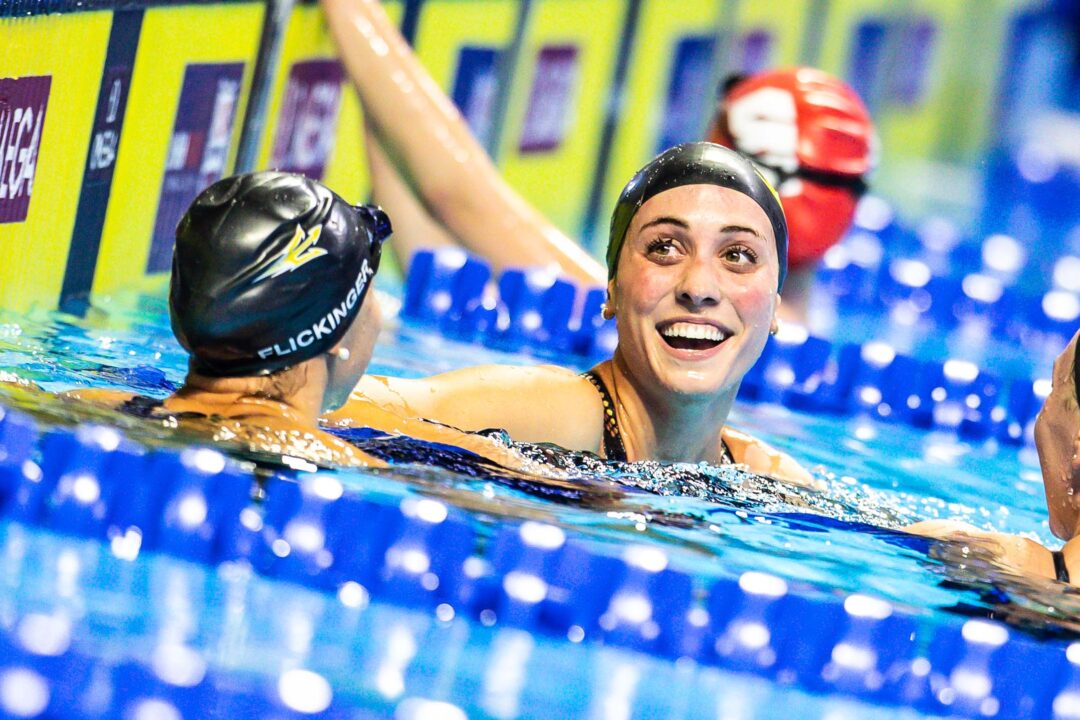 Weyant's arrival to Gainesville will make a huge impact on her team, which is already one of the fastest-rising women's programs in the country. Archive photo via Jack Spitser/Spitser Photography

A week after entering the transfer portal, Tokyo silver medalist Emma Weyant has announced via Instagram that she will be competing for the University of Florida. She spent her freshman season at the University of Virginia and has three remaining years of eligibility left.

Weyant’s transfer comes after the May 1 transfer deadline, so it is unknown whether she will be able to compete in the 2022-23 NCAA season. When SwimSwam reached out to her after she entered the transfer portal, she said she was looking to compete this fall.

First, I would like to thank everyone at @stokedmg, @arenausa, and @swimoutletusa for always supporting me and my dreams no matter what. Thank you to @sarasotasharks for always being a home. And thank you to my family for absolutely everything.

Thank you to my @uvaswimdive family. I am forever grateful for all of you.

I am so excited for the next chapter at the University of Florida with @gatorswimdive. Time to go home🧡

In her season with UVA, Weyant finished second in the 500 free, third in the 400 IM, and 20th in the 1650 free, setting huge personal bests in the former two events. She scored a total of 32 individual points, the sixth-most on her team. Although Weyant is known to be a stronger long course swimmer, considering that she has 2020 Olympic silver and 2022 World Championship bronze in the 400 IM, she saw major improvements in her yards events last season.

At UVA, Weyant was one of the strongest mid-distance swimmers, but just one out of the many stars on a team that dominated NCAAs last year to take the national title. That’s going to be different in Gainesville, where she has the potential to single-handedly boost up her team, at least for the 2022-23 season.

For a variety of reasons, Weyant’s decision to come to Florida makes sense. She grew up in the state and swam with the Sarasota Sharks club for the majority of her life, even deferring her freshman year at Virginia to train at home in the leadup to the Olympics.

Florida is also becoming one of the fastest-rising women’s programs in the country, especially for mid-distance/distance freestyle and IM. In the 2021-2022 season, their first year with Anthony Nesty as head coach, they outscored their seed times at NCAAs by 82 points to finish 13th overall. They already have 500/1650 free all-American Tylor Mathieu, and a wave of top talents such as Bella Sims, JoJo Ramey, and Michaela Mattes will be joining them in fall 2023. The addition of Weyant will only further bolster Florida’s case to become a top five team in the future.

Aside from the UF women’s team, there are also plenty of world-class swimmers who train under Nesty and specialize in Weyant’s events, such as recent transfer Jake Mitchell, Kieran Smith, Bobby Finke, Trey Freeman, and Katie Ledecky.

Mitchell and Weyant are a romantic couple, with Mitchell commenting on her transfer post “love and middle distance at Florida conquers all.” That comment is a reference to a running joke surrounding whether Mitchell would join Weyant at Virginia when he was seeking a transfer, and the quip that love conquers all, but Florida middle distance conquers love.

In browsing through some way-overreacting posts from UF homers here…& seeing that your Gators did not have any podium medalists in 2022 NCAAs, nor did the team finish in the top-10…I’d advise y’all to slow down the Florida hype train. Congrats, Ms. Weyant, in going back home to compete whenever eligible.

PS: Katie does not compete in the NCAA anymore: ergo her swims don’t count.

why is it such a hot topic? (nothing against her, just so many comments)

She is a reigning Worlds and Olympic medalist leaving the reigning NCAA champs. That seems like a bit deal for a sport that isnt huge on mainstream media.

I get that, I know what she’s accomplished.

Then you should recognize why your question is dumb

Is she eligible since she missed the deadline?

It sounds like the NCAA just doesn’t care anymore.

Great get for the Gators. Between her and Bella Sims (and her whole extremely strong class) Florida is coming back to relevancy quickly on the women’s side.
Curious to see if Grimes ends up going there with Sims (her current teammate), Ledecky likely staying long term since her recent surge, Weyant (her 4im counterpart). Nesty is cooking up something over there.

There’s three months and three Pro Swim Series stops in between NCAAs and trials next year, I’d love to see her experiment with the 400 IM at one of those competitions.

Honestly, there’s a whole bunch of events that I want Alex to time trial in long course just because she’s so good at all of them in yards. Like, I’m pretty sure she could swim a great 200 breast long course as well.

I think it is a given Alex Walsh will go the 4 IM at NCAAs next year. I’d bet she would break the American record. Her better events in the strokes are all 200s. She’d final the 2 breast at NCAAs or at a selection meet if she swam it & that would have to be considered her “weak” stroke. It makes too much sense for her to go the 4 IM at selection meets. It is the first day at Trials, nothing conflicts with it.

Final? Alex Walsh would probably med in the 200 breast at NCAAs if she swam it…
And on a good day she can win it 🙂

Her “weak stroke” is whichever one she hasn’t raced most recently lol.

Breaststroke is like not even close to being her weak stroke

I don’t see her touching Eastin’s 4IM record. That performance was phenomenal.

You know.. It makes me think, DeSorbo must’ve done a hell of a job to grab an in-state middle distance/distance IMer and freestyler away from UF in the first place..

Plus Trey Freeman from the Worlds squad

They also have two swimmers on the Open Water Worlds team (Brennan Gravley and Anna Auld).

I look forward to watching Summer McIntosh and Katie Grimes destroy her in the 400 IM again and again.

Must be a UVa affiliate!

You have a great and appropriate handle. The uva girls and staff will always support her. Hey, these are kids, and they all know each other from many events over many years. Back off. You just don’t get it.

Agree. Young adults have a number of reasons for changing course. It’s her decision, her prerogative. She should thrive closer to home at UF.

that is if emma doesn’t learn from finke

That’s pretty petty to root against her because of NCAA scoring? Really?
She wasn’t even that big a scorer for UVA.
Get over yourself and let her swim where she wants.

“That big of a scorer”

Didnt mean to trash her, she is one of my favorite swimmers. Just meant on a relative scale she was their 6th best scorer and pretty much every other scorer also did or could contribute on relays more than she did. She is still clearly elite, just not tailored for NCAA scoring.

Curious to know if Gardner-Webb was in the running…