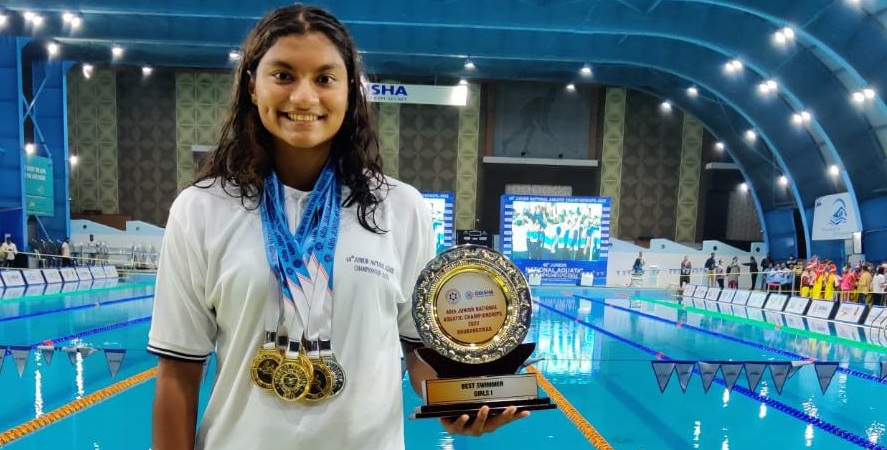 The week after setting 5 National Records at the India Junior Championships, Apeksha Fernandes spoke with SwimSwam about how India can continue developing its swimmers. Current photo via Apeksha Fernandes

Sanuj Srivastava contributed to this report.

India swimmer Apeksha Fernandes says that she believes her country needs more investment at the grassroots level of swimming to create more success stories like her.

The 17-year old broke 5 National Records in 5 entries at last week’s India Junior National Championships in Bhubaneswar. She was named the competition’s Best Swimmer for her efforts.

Fernandes also holds the National Record in the 200 fly, having swum a 2:18.39 in June, though she didn’t swim that race at this meet.

While none of the times are yet globally relevant, her success does serve as a lurch forward for women’s swimming in the country, a year after the country’s men’s swimmers saw a similar surge, with multiple swimmers hitting Olympic “A” times for the first time in history.

India didn’t even send a women’s roster to the most recent Asian Games, though they sent 11 men (and very nearly won a medal).

“I feel that basic infrastructure and support facilities need to reach down to the grassroot levels,” Fernandes told SwimSwam after her breakout meet. “Talent here is scouted only after one has reached the state/national arena, leaving many potential swimmers unidentified.”

Fernandes says that the problems aren’t specific only to women, but to the sport as a whole.

“I live in the metropolitan city of Mumbai and swimmers here are struggling to find a 50m pool to train in,” she said. Mumbai is the largest city in India and the 8th-largest city in the world by population with around 20 million inhabitants.

Fernandes says that she trains about six sessions per week, with

She won’t be part of the country’s 6-swimmer team at this week’s Commonwealth Games, but instead will focus on the upcoming World Junior Swimming Championships that begin in August in Lima, Peru.

Fernandes says that she hasn’t looked far beyond the upcoming meet.

“Being a one-step-at-a-time kind of person, I’m now looking at doing my best at the FINA World Junior Championships. Ahead of which, I am yet to plan.”

if they started hiring foreign staff they would overcome many problems

Struggling to find a 50 meter pool in a city of 20 million people? Insane. All the talent scouting in the world can’t overcome that problem.