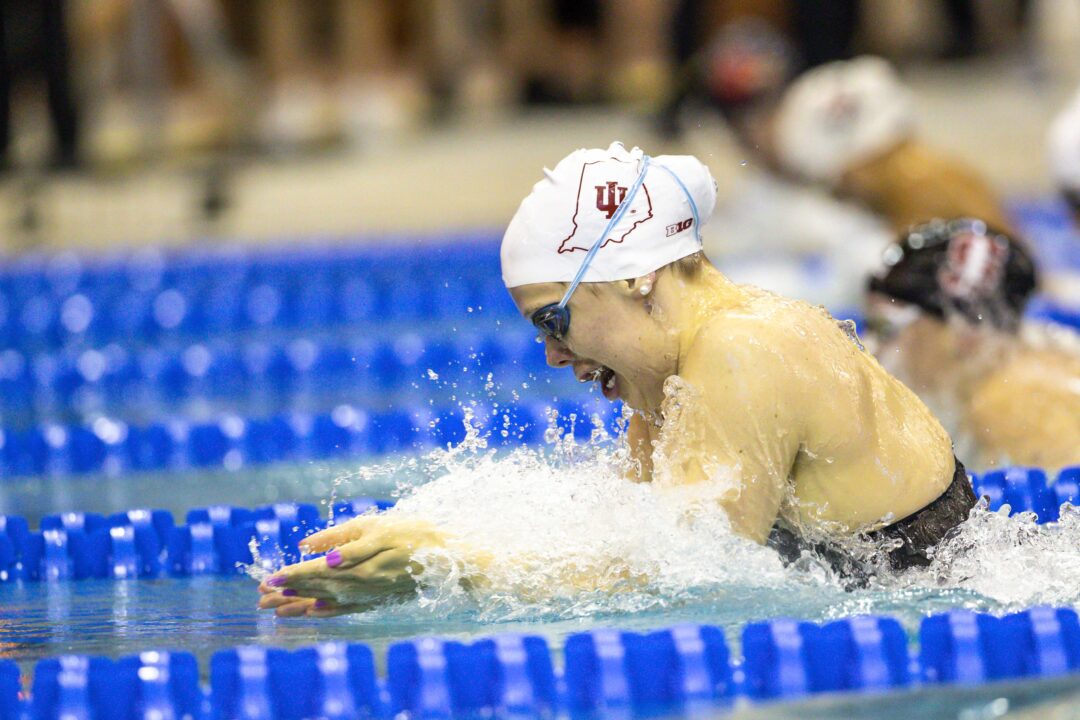 Indiana University hosted an intrasquad meet over the weekend, seeing Cream down Crimson in the men's and women's meets. Stock photo via Jack Spitser/Spitser Photography

Indiana University hosted an intrasquad meet over the weekend, seeing Cream down Crimson in the men’s and women’s meets. Of course, the biggest news coming out of the weekend is that Olympic Champion Ahmed Hafnaoui, who is a freshman at IU, has been ruled a partial qualifier, which makes him ineligible to compete this season. A partial qualifier is a designation for someone who enters their first year of college not having satisfied the NCAA’s requirements for Core Class GPA and ACT/SAT scores. The designation means that Hafnaoui is able to practice with the team and receive a scholarship, but won’t be eligible to compete in NCAA meets until next season (2023-2024).

Notably, star breaststroker Josh Matheny, a sophomore, only competed in one event at the intrasquad, swimming the breaststroke leg of the Cream ‘A’ 200 medley relay. He split 25.24 on his leg, which was the slowest breaststroke leg in the field.

The Peplowski sisters were competing on different teams, but the pair won a combined five individual events at the meet. Noelle Peplowski, a fifth year who was on Team Crimson, was a triple event winner on the day. She first won the women’s 100 breast, swimming a 1:00.99 to beat out Lilly King, who touched second in 1:01.77. The older Peplowski sister then went on to win the women’s 200 breast in 2:12.81, touching first by over three seconds. She capped off her day with a win in the 100 IM, swimming a 56.34.

Anna Peplowski, a sophomore who was representing Cream, took the women’s 200 free and 200 back. She won the 200 free convincingly, swimming a 1:48.06 to finish first by three seconds. Anna was out to a roaring start, flipping at the 100-yard turn in 52.32, which put her in the lead by two seconds at the halfway mark. The younger Peplowski sister then clocked a 1:58.96 to win the women’s 200 back, touching as the only swimmer under 2:00. Interestingly, it was distance freestyler and open water freestyler Mariah Denigan who took second in the 200 back, swimming a 2:00.15.

Mya almost as fast as Tristan on the Med Relay

Why are we impressed how swam hafanouis 200? I would hope an Olympic gold medalist wouldn’t die in a 200