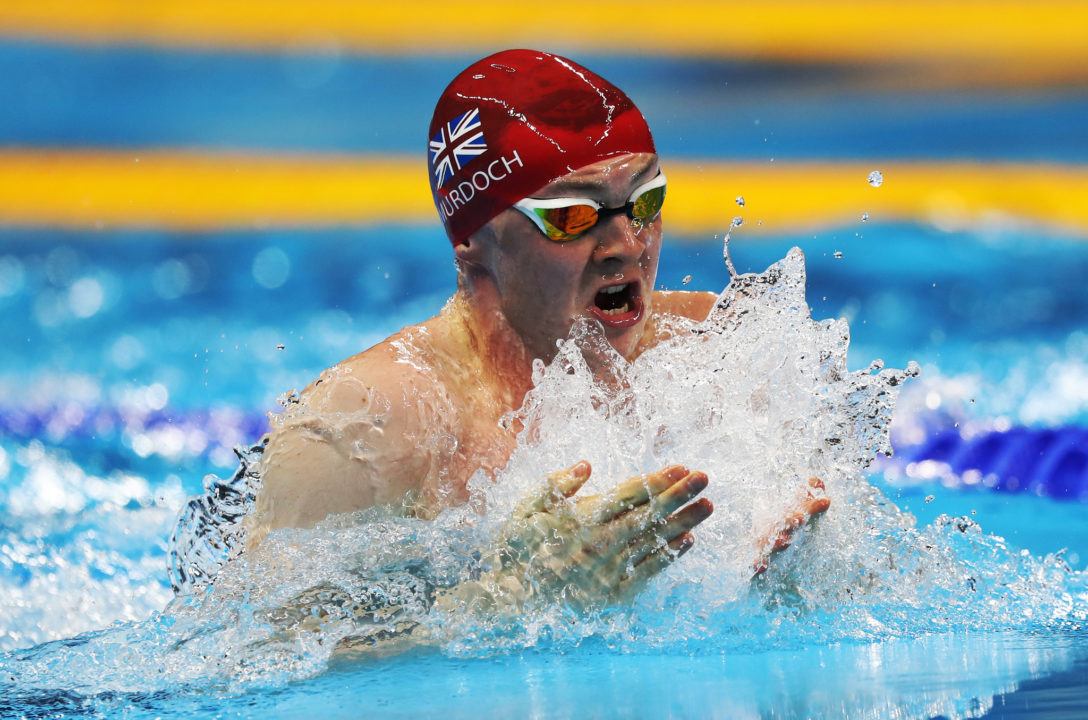 The 2018 Scottish Short Course National Championships finished up in Edinburgh tonight, with the University of Stirling snagging the 'Top Club' award.

Helping carry the Stirling squad to victory was Commonwealth Games medalist Ross Murdoch, the man who notched new National Records in both the 50m and 100m breaststroke on nights 1 and 2. During tonight’s final session, Murdoch hit the wall first in the 200m distance, completing a trifecta of victories in the breaststroke discipline.

24-year-old Murdoch registered a winning effort of 2:03.43, a new personal best and his first occasion under the 2:04 threshold. He now ranks as the 7th fastest performer in the world this season.

Teammate Scott McLay also gave Stirling a surge with his new National Record in the men’s 50m butterfly. After registering 24.09 this morning for the 2nd seed behind Poole’s European Championships swimmer Jacob Peters‘ 23.86, McLay turned on the heat in the final to take gold in 23.46.

Peters settled for silver in 23.76 to represent the only other swimmer under the 24-second threshold.

For McLay, his time overtook the previous NR of 23.49 set by Todd Cooper way back in 2008. Of his race, he commented, “I’ve kind of been focusing on everything here really but with it being Short Course obviously the turns come into it a lot. I’m very happy with how the meet has gone overall.

“Next year Glasgow 2019 is an aim for me, but I also want to try and make the team for the Worlds. It’s all about the process; this time last year I’d only just joined Stirling but I’ve adjusted to the programme now and with Steve (Tigg) and Brad (Hay) behind me, I feel a lot better.”

Olympian Duncan Scott won the men’s 200m freestyle, clocking a time of 1:43.09 to win by well over a second. His personal best and Scottish national standard rests at the 1:42.47 produced at this meet 2 years ago. His time this evening sits Scott just outside the top 10 performers in the world this season.

Post-race, Scott stated, “It’s been a different experience for me this meet.  With racing and exams I’ve struggled more than I thought I would, just with switching off and moving from one thing to another, but it’s something you just have to deal with as an athlete and being at Uni as well.

“The Uni in Stirling has been great allowing me to sit the exam in Edinburgh on Saturday, providing an invigilator (sic) and just adapting things to my needs.”

Anderson did claim the top prize in her next race of the women’s 200m freestyle, however. The Senior World Championships semi-finalist and Commonwealth Games and European Championships medalist cranked out a winning effort of 1:55.14. That beats her previous personal best of 1:55.44 notched in Ontario almost 2 years ago.

With her performance, Anderson checks-in as the 7th fastest British performer ever in the event.

Certainly a dominant display from the Stirling athletes. Very impressive depth, quality in a range range of events.

Will be interesting to see what the English equivalent throws up, I expect Wilby to be of interest, can he beat Peaty?