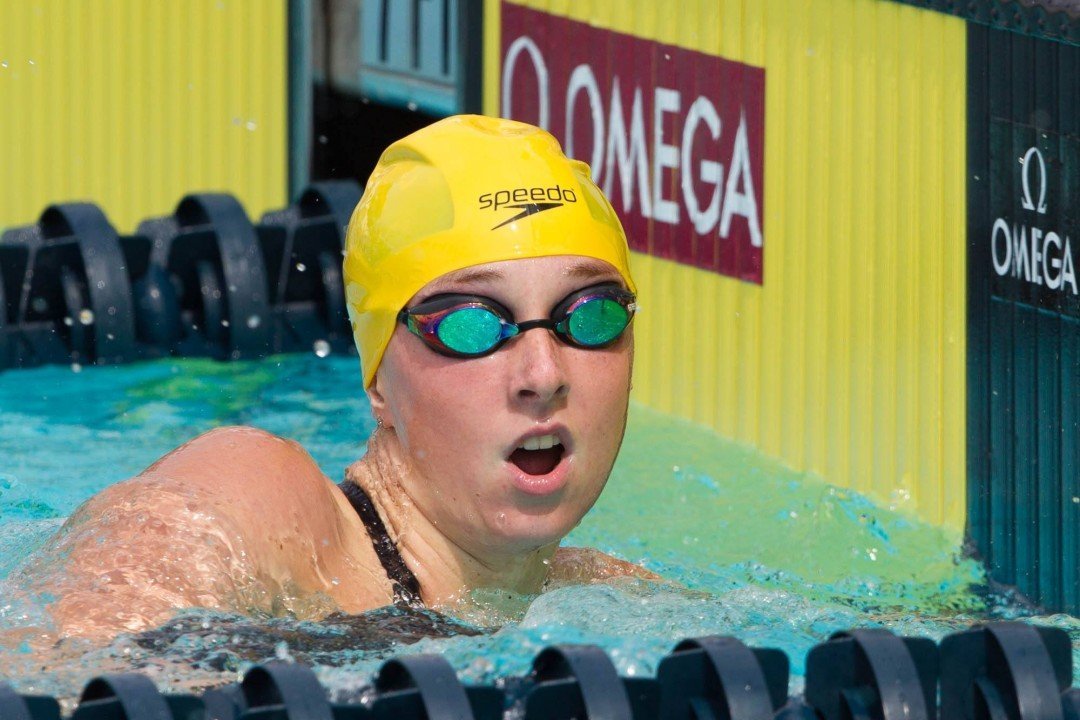 Stanzi Moseley swam two very good races in the 50 and 100m freestyles. The 100 was the more impressive of the two swims, earning her a 2016 Olympic Trials cut. Her time of 56.49 did the trick, although it was well off her seed time of 55.03. Archive photo via Tim Binning/TheSwimPictures.com

Katie Grimes is one of multiple 2021 Olympians swimming at Open Water Nationals this weekend and trying to qualify for the Worlds team.

Thomas Heilman highlighted the 2021 Winter Junior Championships as he broke numerous NAG records. The 2022 qualifying standards have been announced.

SwimMAC Carolina’s Baylor Nelson is lined up for a big swim in the 400 IM on Friday night after qualifying first from prelims.

Winter Junior Nationals gave way to a great competition, but one of the hidden story-lines were the extremely fast results that came out of time trials. There, swimmers got the chance to do some fast long course swimming to add to already impressive short course results.

Three girls swam 100 backstroke trials qualifying times in their time trials. Emma Schanz, Tevyn Waddell, and Ashley Pollok all dipped under the 1:03.39 standard. The only one who had a Olympic Trials cut in the event going into the time trial was Schanz who went a lifetime best of 1:02.21. Waddell was a 1:02.63, Pollok a 1:03.36.

Katie Glavinovich rocked a solid 200 backstroke to grant her a trials cut with a time of 2:16.42 to take over two seconds off her previous personal best and dip under the 2:16.59 standard.

Keneisha Liu who finished fifth overall in the 400 yard IM at juniors swam a 200m breaststroke time trial and also grabbed an Olympic Trials cut with her swim. Liu was a lifetime best of 2:34.58 at the touch. She also swam a 4:56.06 to crack the four minute mark in the 400m IM for the first time.

Jared Graham of Penguin Aquatics swam a very solid 1500m freestyle to go under 16 minutes for the first time. The 15-year-old was a 15:55.12 bringing him within five seconds and change of a 2016 Trials cut.

Sixteen-year-old Bryce Mefford dropped significant time in his 100m backstroke from a 58.54 to a 56.91. That time gave him leeway to swim at both the 2015 Summer Nationals and 2016 Olympic Trials. He had similar results in the 200m backstroke dropping a full two seconds and making the same standards with a 2:02.92.

Michael Andrew swam a 2:18.75 200m breaststroke to drop tons of time of his seed time of 2:30.16, which clearly wasn’t a great indication of his current breaststroke prowess. With that time he made a 2015 Summer Nationals cut.

For full results of the time trials click here.

Hard to swim crazy fast in long course during the short course season.

Although, I’ve got to say that a lot of the California clubs have an advantage here as they train long course year round. Many of the California teams train long course in the mornings, and short course at night. So while I can’t be for sure, I think Glavinovich, Liu, Moseley, and possibly Medford have an advantage over those who don’t have the opportunity to train Long Course year round.