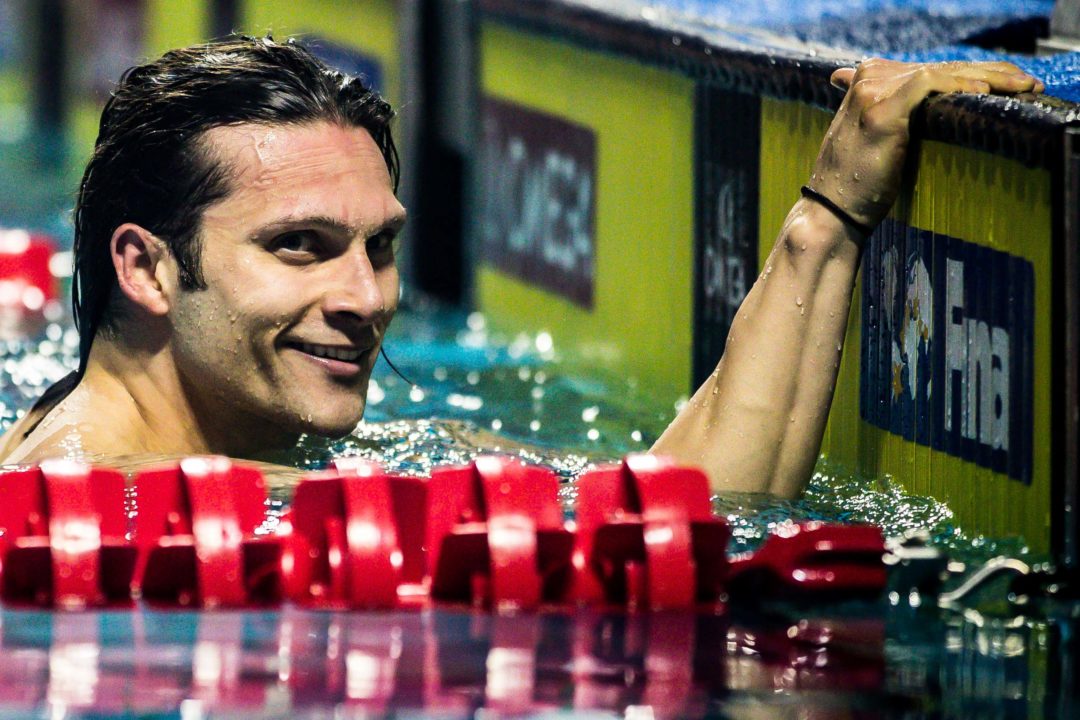 Julie Meynen lowered her second Luxembourgish National Record of the weekend in the women’s 100 free final in Clovis, clocking a time of 54.63.

Cody Miller and Olivia Smoliga are your 2019 Pro Swim Series champions, navigating the new format to win $10,000 apiece for the top male and female swims of the series in FINA points. Meanwhile Michael Andrew led all money-earners on the series with $25,750.

Miller vultured his title late, blasting a 2:08.98 in the 200 breast at the penultimate stop of the series in Bloomington in May. Miller went after that meet for times far better than his rested times last summer, and his 200 breast was a career-best. It garnered 947 FINA points – a good 20 points beyond the previous best swims. Luca Urlando made a late charge with his 1:53.84 in the 200 fly at Clovis, but that was only worth 939 FINA points, just behind Miller.

FINA points are based off of the standing world records, allowing meet organizers to compare times across events. The downside is that an especially fast or slow world record will disproportionately affect that event in its ability to give out FINA points. That was very apparent on the men’s side, where four of the top six swims came in the 200 breast. For the women, three of the top six came in the 100 back.

Meanwhile, Andrew led the series in overall prize money earned, despite not taking in the $10,000 bonus. Andrew compiled $25,750 over his four stops on the tour – he didn’t swim this week’s Clovis meet, but still led all money-earners by about $4,000 over Smoliga.

Here are the top swims (in FINA points) across the series. The bolded swims at the top are the $10,000 series champions:

Is Urlando even allowed to accept the money due to NCAA rules?

Yes and no. The rules are not simple enough to say “amateurs can’t accept money,” because they can accept money to cover real costs. Those rules are too complex and there are too many unknowns to accurately track them, but as the heading to the table describes, this is based on “money earned,” not necessarily “money accepted.”

I don’t think he is accepting any prize money regardless, or else his NCAA eligibility is gone.

Good to know, and a fair rule.

10k would’ve been just a bit more than the short drive to Clovis and a few nights at a hotel…had he achieved the top time I wonder if the prize money would’ve passed onto Cody, with Urlando inevitably declining it.

I mean Luca can’t even accept the money, and Miller can. What’s the issue really?

I think a lot of people are in the right to think 1.53.8 should be miles ahead of a 2.08.9. But the fact is the breaststroke events have just had so much success these days compared to the other strokes, literally people everywhere are popping these times. Back in the day, the same could be said for the 200free where more people had higher quality swims. I think we are just in a cycle where a lot of people are swimming really fast breaststroke, hence a 2.08.9 doesn’t seem fast(even though I think it should be considered a fast time).

That is the award for the quality of the swim. And measuring the quality is very subjective and problematic thing. See examples of figure skating, diving, gymnastics, etc. We can measure the quality of swimming compare the result of particular swim to the absolute standard. That would be a world record: nobody ever has swum better. Or we can compare this swim to the current level of competition. That is in its turn very subjective thing to measure because the vast majority of swimmers don’t care much about their in-season results and perform at full force only one or two (at best) times per season. Another issue with measuring level of competition is that the entire event can be in… Read more »

So if someone swam a 1:43.9 200 free at this series (a time fast enough to win 2017 world’s and Rio by over half a second and arguably blow up the comments section) they still would not pick up enough points to have beaten Miller…

I’m no expert, but I’m gonna go out on a limb and say Fina points might not be the best way to determine this.

I agree. World ranking should be used instead of FINA points.

What is the current NCAA rule on $ earned through competition affecting eligibility? i.e. have the likes of Stadden and Regan Smith, as they or on your spread sheet summarizing winnings, given up their NCAA eligibility? If they changed the rule could Michael Andrew come into the NCAA competitive fold if he desired to do so? Or is it as simple as Regan and Isabelle should have been excised from the list or marked with an asterisk?

It’s earned prize money but it doesn’t mean they will accept it Bc it would affect their amateur status and NCAA eligibility.

Amateurs can accept up to the amount of their expense for that meet, the rest gets thrown into the prize money void. Truly, no one knows where that money goes 🤔 but I sure wish it got passed to the next fastest pro in the heat 😜

We actually DO know where the money goes when passed on by amateurs – into the USA Swimming National Team endowment fund! This was coming up often enough that we asked USA Swimming last year – here’s the long version of the explanation:

I’m not sure I like the new FINA points system for deciding the winner.