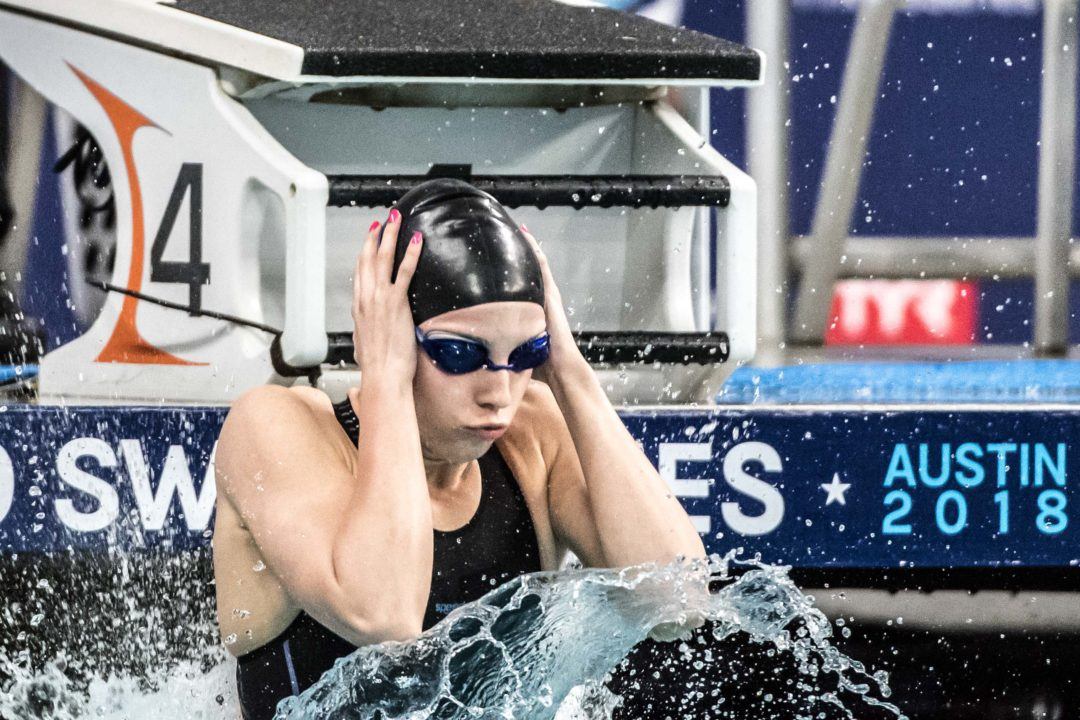 Regan Smith delivered yet another World Junior Record in the 100 meter backstroke in the final session of racing at the 2019 Counsilman Classic. Current photo via Mike Lewis/Ola Vista Photography

Regan Smith delivered yet another World Junior Record in the 100 meter backstroke in the final session of racing at the 2019 Counsilman Classic at the legendary IUPUI Natatorium in Indianapolis.

After posting a 58.55 in prelims to shave .27 from her previous WJR set at the Bloomington stop of the 2019 Pro Swim Series, Smith came back with a 58.45 tonight, breaking her tie with Canada’s Taylor Ruck for 2nd in the world this year behind leader Kylie Masse. Her 58.45 falls just short of Missy Franklin‘s National Age Group Record of 58.33 set in 2012, before FINA recognized World Junior Records. Read more about Smith’s WJR here. The past few days have been quite successful for Smith, who also posted new best times in prelims and finals in the 200 and 400 freestyles.

Corey Gambardella won the men’s 200 fly in 1:59.61, getting the better of Louisville star Zach Harting, who touched 2nd in 2:00.24. Gambardella was 2nd in prelims with a time of 2:01.96 behind Miles Smachlo of Michigan, who appears to have scratched the final. This is only Gambardella’s 2nd time under 2:00, with his first coming last month at the Bloomington stop of the PSS, where he posted a 1:58.49.

Russian Grigory Tarasevich won the men’s 100 backstroke in a quick 54.23, besting Brazilian Gabriel Fantoni (55.31) by over a second.

The women’s 200 IM was won by Louisville’s Maria Eduarda Sumida in 2:16.72, though runner-up Noelle Peplowski had perhaps the most interesting performance in the field: though Peplowski couldn’t quite run down Sumida, touching .18 behind in 2:16.90, she conjured a massive 36.37 split on the breaststroke leg of the race to make up 4 seconds on Sumida, who at 100 meters was 1:04.20 to Peplowski’s 1:09.60. Peplowski’s final 50 of freestyle was also nearly a second faster than Sumida’s, but not quite enough to get her hand on the wall first.

Watch a video of the session here:

This is a very similar trajectory to Missy Franklin in 2011.

Yes it a stupid rule of FINA

Blame it on USA Swimming

Regan Smith’s time is the winning time in the Rio Olympics. Wow

It was a prehistoric time when Baker and Masse swam 58.75, 58.76. So winning the Olympic gold wasn’t such a challenge.

Just the Pressure of an Olympic Final brings a challenge …..come on Man , what are u talking about ?