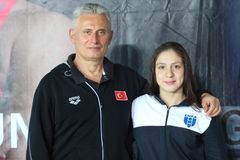 Touching in a time of 15:45.29, Tuncel scorched her previous career-quickest of 16:21.65 to establish a new Turkish senior national record en route to taking the title here in Instanbul.

But, her swim took things a step even further, easily dipping under the World Junior Record benchmark of 15:54.69, which was set at the time of the records’ inception in 2014 and has yet hasn’t been touched. However, Tuncel dipped under the margin by 9 seconds with her powerful swim.

Splits for the enormous performance are seen below.

Tuncel is coached by Gjon Shyti, an Italian who previously had Luca Marin under his tutelage. Retired Marin represented Italy at 3 Olympics, with his highest individual finish being that of 5th place in the 400m IM at the 2008 edition in Beijing. He also earned two individual World Championships medals over the course of his career.

Shyti and Tuncel are stationed in Ankara, one of the 5 Turkish Olympic Preparation Centers.

Just for your correct information Gjon Shyti is Albanian Swimming Coach which has also Italian nationality.