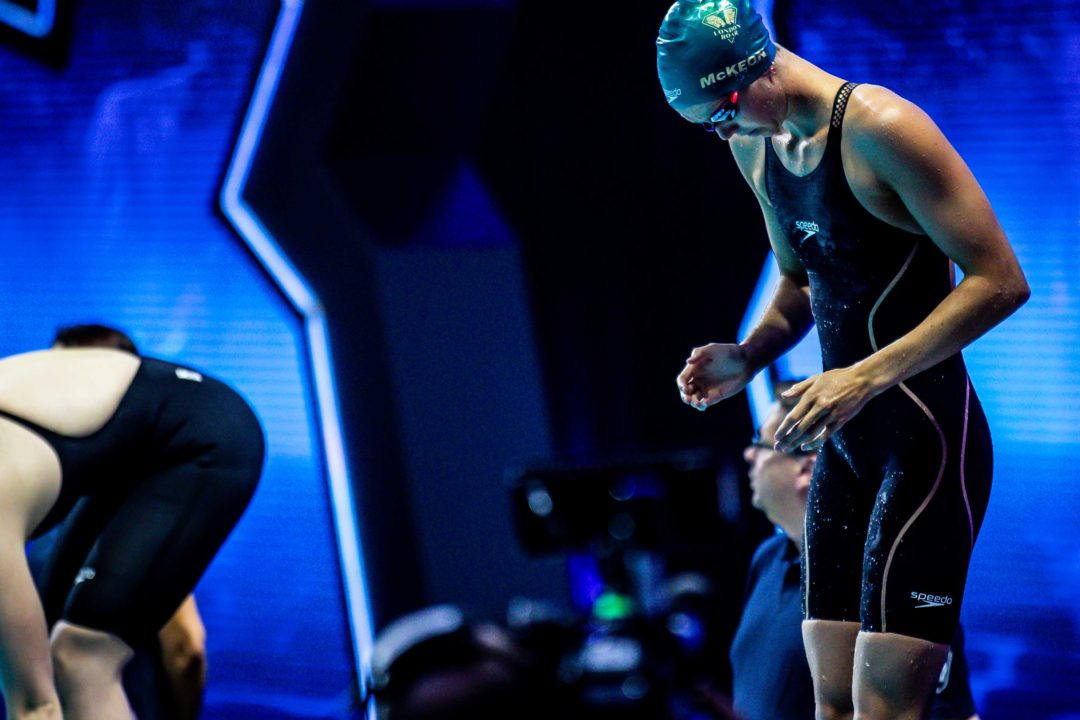 Capping off a stellar meet here in New South Wales, 26-year-old Olympian Emma McKeon fired off the #1 time in the world in the women’s 200m freestyle.

After establishing herself as the 2nd-seeded swimmer behind Madi Wilson durig last night’s heats (1:59.23 to Wilson’s 1:58.77) Griffith’s McKeon unleashed a super quick time of 1:55.56 to beat Wilson by over a second in this morning’s final.

Opening in 55.95 and bringing it home in 59.61, McKeon’s 1:55.56 result tonight overtakes the previous season-leader in the world rankings, Yang Junxuan of China. Yang held a super quick 1:55.65 from January, but McKeon slid under that mark by .09 to wear the crown.

McKeon owns a lifetime best of 1:54.55 in this 2free event, a time she cracked at the 2019 World Championships Trials before dropping the event in Gwangju. Her time this morning checks-in as the 8th fastest time of this versatile Aussie’s career.

For her part, although Wilson settled for silver this morning, her speedy result of 1:56.85 ties the 2nd fastest time of the 26-year-old Marion swimmer’s career. Wilson has been as fast as 1:56.60 at this same meet last year, but still now becomes the 6th fastest swimmer in the world this season.

Another swimmer who tied the 2nd best time of her career in an event was 19-year-old Kaylee McKeown in this morning’s 200m IM field. The USC Spartan led the women’s heats last night in a cool 2:14.85 before digging deep to come up with a mighty 2:09.94 to climb atop the podium.

Aussies. Working on the pre-Olympic times only to crash and burn at the event. Sorry but when will they learn!

You’re not sorry . And in July you’ll be proven incorrect . Love how anyone else going fast in the world gets praise. You may have forgotten Horton, Chalmers and 4×100 relay in Rio . Plus other minor medalists. Plus Seebohm battling illness etc

lol – plenty of countries have swimmers that crash & burn at a major, particularly the top nations for some events where you pretty much have to swim a medal-winning time at trials to even qualify for your nation’s team.

Clearly you’re only seeing what your wanting to see because on the evidence of this meet; those who were notably fast (McKeon, McKeown Jr) are generally quick year round rather than clear unmistakable evidence of swimmers peaking at the wrong time. Yes, I’ll agree AUS Swimming didn’t help itself in the past with timing of its Trials but still holding Nationals in April remains a head-scratcher but I doubt there will be too many still peaking in April this year.

I think many have overlooked that this meet can/could be a selection meet for the Olympics. Although way down the list of possible selection meets should Covid hamper any upcoming meets the athletes were well aware they needed to post times to ensure their selection, even though in hard training. Those of slighter builds, usually the women, possibly found it easier to post fast times while in heavy training as their recovery is usually better.

Yang’s time at the beginning of the month was forgotten here.

Yeah I thought some Chinese girl got the Asian record recently 1:54.7?

He was sick … cold symptoms apparently. Given health restrictions, anyone with even the mildest symptoms have to isolate and get tested for COVID in NSW.

Yeah but she did not have Kaylees work load, She is training through this meet.

I have been disappointed with our efforts at the last 2 olympics given the hype with having so many number 1 rankings going into those Olympics. But i feel with sailor boy and the Dutchman gone and the trials approx 5 weeks prior to the games Australia may come up to expectations .Rohan Taylor new head coach has been going about his business methodically pointing to a strong Olympics.