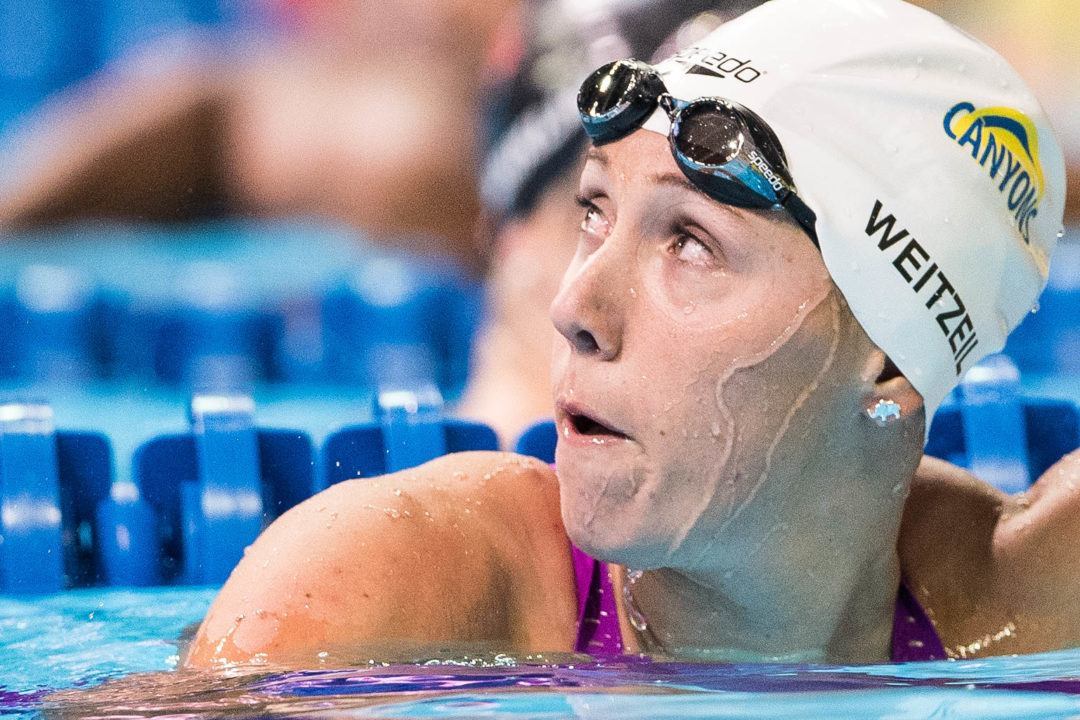 Without further ado, let’s go back and remember what was going on during the 8th day of the Olympic Trials back in 2012 and 2016. Stock photo via Mike Lewis/Ola Vista Photography

The Trials That Would Have Been: Manuel, Dressel Chasing Barriers On Day 8

Four years ago, 19-year-olds Abbey Weitzeil and Simone Manuel made their first Olympic teams. They would have battled for a return in the 50 free today.

Let’s go back and remember what was going on during the 7th day of the Olympic Trials back in 2012 and 2016.

The final day of the Olympic Trials schedule is extremely concise, featuring only a finals session consisting of the women’s 50 free and men’s 1500. That being said, this recap will be shorter. Let’s look at what happened in those events in 4 and 8 years ago.

MORE TO COME FROM ABBEY WEITZEIL

The first sentence from our live recap for Day 8 of the 2016 Trials: “Abbey Weitzeil is officially leading the new age of American women’s sprinting after sweeping the two sprint freestyle events here in Omaha en route to her first Olympic berth.” The statement, as we’ve seen since then, was an accurate one. Although Weitzeil did hit a bit of a plateau for a while after 2016, she’s been on a tear lately, and is definitely a favorite in the sprint events for the 2021 Olympic Trials.

In 2016, Weitzeil swam a quick 24.28 to beat out Simone Manuel (24.33) for 1st. The rising college freshman had earned her first Olympic berth in the 100 free earlier in the meet, and now added a second event. She had already been named to the 400 free relay by virtue of winning the 100 free, and she would go on to swim the 400 medley relay as well in Rio.

American Record holder Connor Jaeger and Jordan Wilimovsky battled hard in the men’s 1500 free final, with Jaeger ultimately defending his title from 2012. Jaeger swam a 14:47.61 to Wilimovsky’s 14:49.19. The two easily secured their tickets to Rio, as they were the only swimmers to break 15:00 in the field.

Wilimovsky’s 2nd place finish made history, as he became the first American men’s swimmer to qualify for the Olympics in both pool and open water swimming. Additionally, he was the first American to qualify for both at the same Olympics. Unfortunately, Wilimovsky would fall just short of a medal in Rio, where he would come in 4th in the men’s 1500, and 5th in the men’s 10k.

Jessica Hardy won a super tight race in the women’s 50 free, using a great start to fuel her victory at these Trials. Hardy swam a 24.50, just .02 seconds off her personal best, which she had swum back at the 2008 Olympic Trials. Kara Lynn Joyce took 2nd place, giving SwimMAC Carolina its 5th swimmer on the 2012 Olympic roster.

According to our recap from 2012, fans watching from home had to deal with constant interruptions during the men’s 1500, which was unfortunate, because it turns out to be an exciting race. Veteran favorite Chad la Tourette took the race out extremely hard, opening up a 5 second lead at the halfway mark. Youngsters Andrew Gemmell and Connor Jaeger battled their way back in the 2nd half of the race, passing up la Tourette. Gemmell and Jaeger both closed in 1:55s for the last 200 meters, while la Tourette was only 2:00. Gemmell won the race with a 14:52.19, and Jaeger was 2nd in 14:52.51. We noted that although it was a great race to watch, it was very likely going to take a mid-14:40s swim to earn a medal in London.