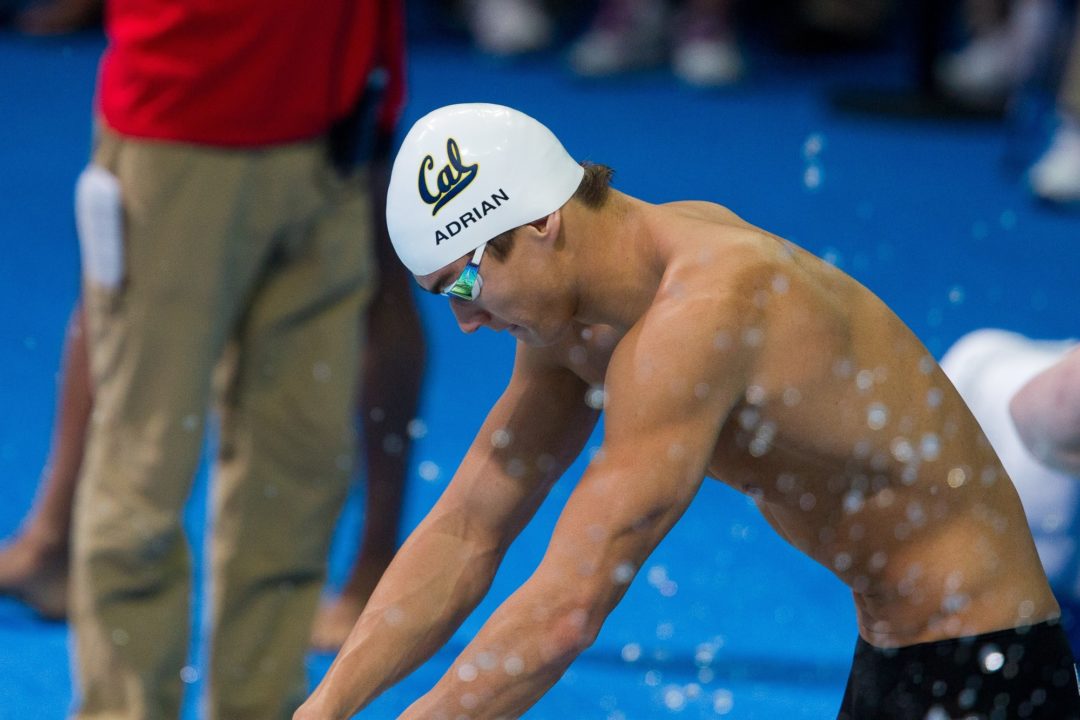 Let’s go back and remember what was going on during the 5th day of the Olympic Trials back in 2012 and 2016. Stock photo via Tim Binning/TheSwimPictures.com

RECORD AFTER RECORD FALLS IN THE MEN’S 200 BREAST

Like the men’s 100 breast, the 200 breast went through a record journey at the 2016 Trials. Kevin Cordes, the newly minted 100 breast American Record holder, broke the U.S. Open and U.S. Nationals Records in semi-finals with a 2:07.86. Cordes only held the records for about 24 hours, however, as Josh Prenot blew them away in finals, clocking new American, U.S. Open, and U.S. Nationals Records of 2:07.17. Kevin Cordes held on for 2nd place, ensuring he will represent the U.S. in both men’s breast events in Rio.

The battle in the women’s 100 free is for real this year, as the top 8 head into Day 6’s final separated by just .50 seconds overall. With individual and relay spots for Rio on the line, tomorrow’s final will surely be spectacular, and anyone could come out on top. Abbey Weitzeil nearly didn’t wait for finals to make history, as she took her 100 out under World record pace at the 50 mark. She faded a little bit down the stretch, but still took the top seed for tomorrow’s final with a 53.57. While it remains to be seen whether that time would be enough for a top 2 finish tomorrow, duplicating the swim tomorrow night should be enough to guarantee Weitzeil a spot on the 400 free relay.

The field is stacked top to bottom with stars, as Simone Manuel, Amanda Weir, Dana Vollmer, Lia Neal, Kelsi Worrell, Katie Ledecky, and Allison Schmitt will all be competing in tomorrow’s final. As we’ve seen from these swimmers both so far in this meet, and in their overall careers, any of them could punch their ticket to Rio tomorrow.

It was a stressful path for Cammile Adams in the women’s 200 fly, but she made it through with a win and a ticket to Rio. Adams was originally disqualified in prelims of the women’s 200 fly for being rotated too far onto her back off a turn. After being reviewed by the underwater cameras, the call was overturned, as they were able to determine Cammile was fully on her side and rotating towards her stomach as she left the wall.

If the stress of being disqualified affected Cammile Adams, it didn’t show in her racing. After officially making it into the semi-finals she went on to lead the way into finals, and then won the event for the 2nd Trials in a row. Adams swam a 2:06.80 to win the 200 fly, and book her flight to Rio. Hali Flickinger held on to take 2nd with a 2:07.50.

2012 Olympic Gold medalist Nathan Adrian will get the chance to defend his crown in Rio after he won the men’s 100 free final on Day 5. Adrian swam the 2nd fastest 100 free in the world this year (47.72), touching as the only swimmer in the field under 48 seconds. NCAA superstar Caeleb Dressel qualified for his first Olympic Team, swimming a 48.23 for 2nd place, edging out fellow NCAA star Ryan Held by .03 seconds. Held and verteran Anthony Ervin (48.54) are guaranteed spots on the 400 free relay in Rio.

WHO IS SCOTT WELTZ?

It sounds a bit blunt, but the major headline from SwimSwam coming out of Day 5 of the U.S. Olympic Trials was literally “Who is Scott Weltz?” We also joked at the time that the swimming fans who knew who Scott Weltz was were most like SwimSwam readers, because we had noted him as someone to watch out for after he tore it up at US Winter Nationals heading into the 2012 Trials. But even we had to admit we didn’t quite see him coming to this degree in the 200 breast, since we thought it looked more like he may make some noise in the 100 breast.

So, who is Scott Weltz? The short answer: A swimmer out of UC-Davis, who took off a huge chunk of time in 2010, but came back to the sport with a vengeance. At the aforementioned US Winter Nationals, Weltz dropped 5 seconds in the 200 breast, and a full 2 seconds in the 100. He came into the 2012 Trials with a personal best 2:12.37, and ended up throwing down a 2:09.01 to win the race and punch his ticket to London.

Not only was he as pure a dark horse as we’ve seen at this level of swimming, his time made him the 3rd fastest American in history, and was the 5th fastest time in the world that year up to that point. Another first-time Olympian, Clark Burckle, came in 2nd, punching his ticket to London as well.

LOCHTE AND CLARY SET THEMSELVES APRT FROM FIELD IN 200 BACK

Ryan Lochte noticeably took his foot off the gas for the final 20 meters or so of his semi-final race in the men’s 200 back, touching the wall in 1:55.73 to take the top seed for Day 6’s final heat. Tyler Clary, swimming the other semi-final, was right behind Lochte, finishing in 1:55.88 for the #2 seed tomorrow. The pair look primed to represent the US in London, as the next fastest swimmer in the semi-final was 16-year-old Ryan Murphy, who swam a 1:57.39, which was best time for him.

Even if we fully expect Lochte and Clary to make it through to London, the race tomorrow should be an exciting one between the two.

The men’s 100 free final at the 2012 Trials was a perfectly fun race to watch, but the results made U.S. Swimming fans a little nervous about their chances in the 400 free relay in London. Nathan Adrian won the event with a perfectly solid 48.10, which was the 4th fastest time in the world that year up to that point. As Braden Keith reported at the time:

“That in-and-of-itself is not nearly the anchor the Americans need to take down the Australians in this relay in London. But after that, things got incredibly shaky. Cullen Jones, who actually led this race before fighting through the last 10 meters or so, took 2nd in 48.46. Matt Grevers, after scratching the 200 back, was only 3rd here in 48.55. And Ricky Berens earned a second relay swim with a 48.80 for 4th. Even if you allow about half-a-second for relay takeoffs (generous for the Americans) that leaves them at a 3:12.00 or so, which may not be enough to medal in the relay.”

The prospect of the Americans not earning a medal in the 400 free relay was unthinkable, because the US has never failed to medal in an Olympic relay, aside from the 1980 Olmypics, which the US boycotted.

Too bad Scott Weltz didn’t get a medal, but he majorly earned his rings tattoo. I think there was a 59 at us open from an unheard of 30 year old this year

I actually have Scott Weltz’s autograph hanging on my wall

Ha, I’d forgotten how invincible the Aussies seemed in the 4×100 leading into 2012. I guess in my head that period was always USA vs France.

I don’t really remember, but what exactly was the situation with Phelps and Lochte apropos of the 4×100 after trials? They were always going to be USA’s trump cards, and at least MP really delivered with a 47.1. Lochte’s 47.7 (I think?) was not too shabby either, even if he got run down by a superhuman Agnel.

I think Lochte got too much flack at the time. USA lost because France had the first and third fastest splits of the finalists. That’s tough to beat.

Other than his 47.0 split in Rome he was never the guy to drop a 47.2 split. The big criticism I remember was that Lochte took it out too hard but Angel was a quarter second faster. Lochte is a 200/400 guy. That shouldn’t have been an issue.

Fact is that angel just had an other worldly split

I always enjoy watching that race on you tube is the Australian commentator wondering whether or not Phelps can hold of Targett.

I’ve forgotten, was it assumed that Phelps would take on the 4×100 relay? I thought that’s why he dropped the 200 free