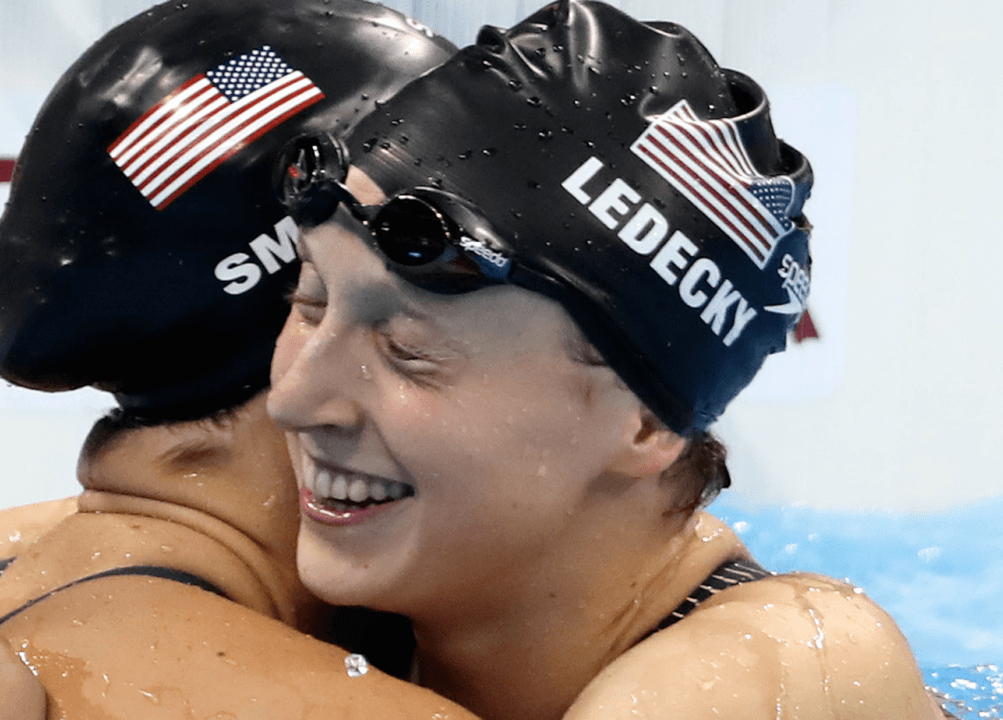 Let’s go back and remember what was going on during the 7th day of the Olympic Trials back in 2012 and 2016. Stock photo via simone castrovillari

MICHAEL PHELPS ON HIS WAY TO OLYMPIC HISTORY…AGAIN

Michael Phelps won the men’s 100 fly on Day 7 of the 2016 Olympic Trials, setting himself up for yet another opportunity at Olympic history. But first, a note a personal history. Yes, we’ve seen Michael Phelps‘ “last race” before, but this time around, we have good reason to believe the 100 fly final on Day 7 of the 2016 Trials will be his last race on U.S. soil. That being said, it was a great race for Phelps to go out on. He clocked a 51.00, and in true Michael Phelps fashion, he waited to make his move until the last 50 of the race, making it thrilling to watch.

In terms of potential Olympic history, this most recent gives Michael Phelps the opportunity to win a 4th-straight Olympic Gold medal in the same event. He will actually have two of these opportunities in Rio, with the other being the 200 IM. If Phelps wins Gold in either of those events, he will become the first swimmer in history to win the same event at 4 consecutive Olympics.

MAYA DIRADO CONTINUES TO HAVE AN EXCELLENT MEET

Maya DiRado cannot be stopped this week! A first-time Olympian, DiRado, not only punched her ticket to Rio in 3 individual events this week, she also won all 3 of those events. The last of which came on Night 7, when she won the women’s 200 backstroke over World Record holder Missy Franklin. DiRado swam a personal best 2:06.90, getting her hand on the wall first by a comfortable margin. DiRado is now lined up to swim the 200 IM, 400 IM, and 200 back in Rio, and if she is able to match or better her times from Omaha in Rio, she well could medal in all 3 events.

We didn’t know this at the time, but DiRado would end up swimming on the women’s 800 free relay in Rio, helping the Americans to a Gold medal with a 1:56.39 split. In all, DiRado would go on to win individual Gold, Silver, and Bronze, as well as relay Gold in Rio.

WILL ANTHONY ERVIN DO IT AGAIN?

Veteran Anthony Ervin was able to qualify for his 3rd Olympics, finishing a comfortable 2nd in finals of the men’s 50 free. Nathan Adrian won in 21.51, with Ervin 0.01 seconds behind. Ervin was the Gold medalist in the 50 free at the 2000 Olympics, and 16 years later, he will have a shot to do it again. At 35 years old, Ervin would earn his place in the Olympic history books if he were able to win Olympic Gold this year. Given his 21.52 at this meet, it’s very possible that he could reclaim his Olympic title. In all likelihood, it will likely take a 21.3 or 21.4 to grab the Olympic medal this year. For either Ervin or Adrian, the biggest hurdle is going to be overcoming defending champ Florent Manadou.

We labeled Katie Ledecky‘s 800 free “the most unreal swim” of the 2012 Trials in our Day 7 recap at the time. Katie Ledecky swimming an 8:19.78 would feel downright slow to us now, but we have to remember at the time she was 15 years old, and she was only 5 seconds off the World Record at the time. Additionally, she the swim made her the 2nd fastest swimmer in the world that year, again, as only a 15-year-old. We didn’t necessarily expect Ledecky to go on to London and defeat World Record holder Rebecca Adlington for Gold just one month after this swim, but it was clear Katie Ledecky had all the potential required to carve out her place in the swimming history books.

Arguably the most impressive aspect of Ledecky’s race was that she took the swim out in a stunningly quick 2:01.67, which even today is a great first 200 for anyone not named Katie Ledecky.

Not much of a surprise at all, Michael Phelps won the men’s 100 fly in 2012. Tyler McGill did give him a bit of a race, but ultimately, Phelps clocked a speedy 51.14. He’ll easily be among the favorites in the event in London. More importantly for Phelps, the win in the 100 fly will allow him at least the option of swimming the same 8-event schedule he swam in 2008, when he won 8 Gold medals. Now, it seems likely that Phelps will compete in all his individual events (200 IM, 400 IM, 100 fly, 200 fly, 200 free), but if he were to opt out of something, it would likely be one of the relays.

2012 is officially the year of young American women’s swimming stars. In addition to 15-year-old Katie Ledecky earning a spot on the London 2012 roster, 17-year-old soon-to-be high school senior Missy Franklin could represent the Stars and Stripes in as many as 7 events in London. Franklin won the women’s 200 back on Day 6, qualifying in her 4th individual event. The 200 back title didn’t come as much of a surprise, since Franklin is the American Record holder in the event, but nonetheless, she is on an excellent path heading into her first Olympic Games.

Little did we know what Ledecky would become… I was watching a video from one of the 2012 PSS meets (then called by the old name that I forget) and rowdy Gaines was like “Here’s Kathleen Ledecky, she may be around for a while”