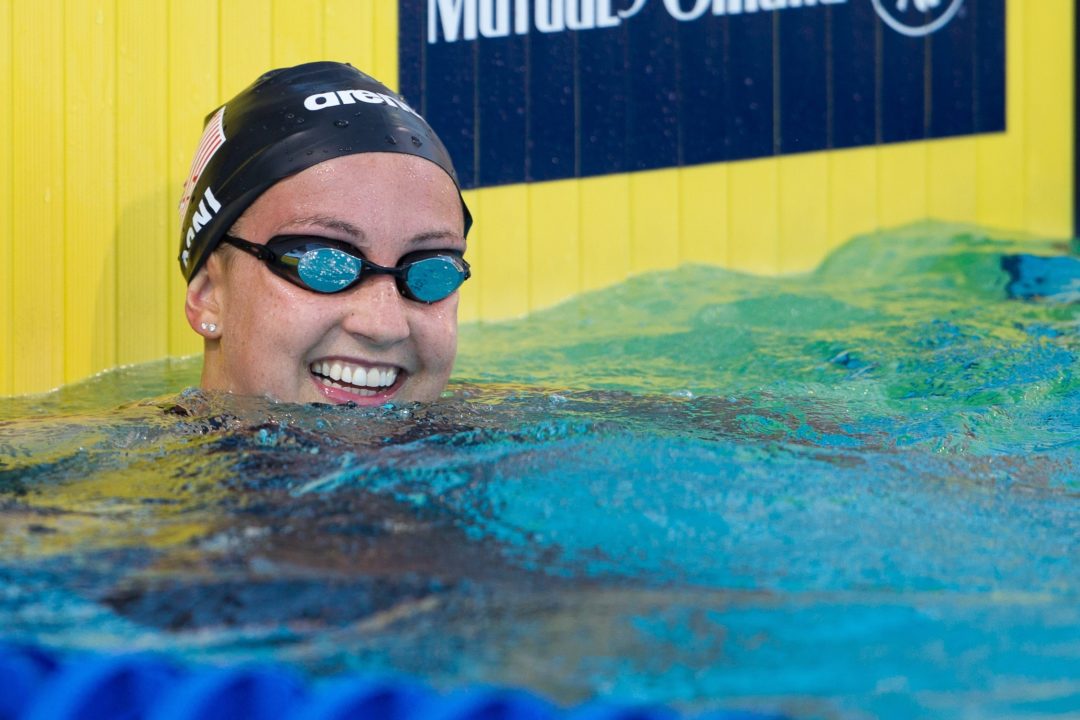 let’s go back and remember what was going on during the 6th day of the Olympic Trials back in 2012 and 2016. Stock photo via Tim Binning/TheSwimPictures.com

Prior to this Olympic cycle, Franklin & Marshall didn’t have an Olympic Trials qualifier since Gordon Chalmers represented the U.S. at the 1932 Olympics.

17-year-old Sara Stotler swam to 2 new Olympic Trials cuts, including earning her first Wave II cut in the 100 butterfly by finishing in 59.58.

Things were looking up for the women’s 400 free relay, after the Americans came in a disappointing Bronze finish at the London 2012 Olympics. Both Simone and Abbey were faster at the 2016 Trials than the fastest leg of the 2012 Olympic relay. With such a deep, fast field, it looks like the Americans may be able to challenge the Australian 400 free relay powerhouse in Rio.

MICHAEL PHELPS AND RYAN LOCHTE IN THE 200 IM…AGAIN!

Day 6 of the 2016 Trials gave us a story seemingly as old as the sport itself: Michael Phelps and Ryan Lochte battling it out in the 200 IM. Phelps got the better of World Record holder Lochte this time around, swimming a quick 1:55.91 to get his hand on the wall first. Lochte was right behind, swimming a 1:56.22, for what was likely his best race of these Trials so far.

Domination probably isn’t even a strong enough word to describe this 200 IM final. At 1:56.22, Lochte touched the wall for 2nd just shy of 3 full seconds ahead of 3rd place finisher David Nolan. With the swims, Phelps and Lochte definitely head to Rio looking like medal contenders, which isn’t much of a surprise, considering we’re talking about the G.O.A.T. and the World Record holder in the event.

Young stars Lilly King and Ryan Murphy each completed sweeps of their specialized strokes on Day 6 of the 2016 Trials. After a spectacular win in the women’s 100 breast earlier in the meet, Lilly King was back in finals-action again on Day 6, winning the women’s 200 breast as well. This was a great performance and accomplishment for King, who previously had been much stronger in the LCM 100 breast than the 200 breast. Lilly led the race from start to finish, holding off a charging Molly Hannis at the end. King touched in 2:24.08, right ahead of Hannis (2:24.39).

It’s a similar story for Ryan Murphy, the young men’s backstroke star. Murphy won the 100 back earlier in the meet after a hard-fought race. He was back in action tonight, winning the 200 back much more comfortably. Murphy swam a quick 1:53.95, getting to the wall nearly a full second ahead of runner-up Jacob Pebley.

American breaststroke star Rebecca Soni looks poised to make a run at the World Record in the women’s 200 breast. Soni smashed the U.S. Nationals Record en route to winning the 200 breast at the 2012 Trials. Her time of 2:21.13 is the fastest in the world this year. All this begs the question: Soni has talked about the WR before, so, could we actually see her break the 2:20 barrier in London this Summer? It looks like she would have to be willing to take the race out a little faster than usual if she’s going to be able to accomplish that goal.

Soni locked up another event for London with the swim, giving her both breaststroke events as individual races. Soni is also likely to swim on the women’s 400 medley relay, whether that ends up being in prelims or finals, or potentially both.

RYAN LOCHTE PULLS OFF A TRIPLE ON DAY 6

With just the women’s 200 back semi-final as rest, Lochte was back in action in the final of the men’s 200 IM. Unsurprisingly, Lochte battled with Phelps all the way through the race, with Phelps narrowly getting the better of Lochte in a 1:54.84 to 1:54.93 decision. Both time were incredibly fast for an Olympic Trials, especially considering Lochte was just off a great 200 back. The pair will head to London as clear title contenders.

In his 3rd event of the night, Lochte had to face off against Phelps again (sort of), this time in a butterfly event. Lochte swam a solid 52.47 to take 6th in the semi-finals, and safely make it back to Day 7’s final in the event. Unsurprisingly, Michael Phelps swam the fastest in the semis, clocking a world-leading 51.35, and giving himself the middle lane for tomorrow’s final.

After finishing a heart-breaking 3rd at Trials in 2008, Jessica Hardy got the job done this time around, winning the women’s 100 free with a 53.96. Hardy was the only swimmer in the field to crack 54 seconds. Rising star Missy Franklin earned another roster spot for London, taking 2nd place with a 54.15. 200 and 400 champion Allison Schmitt was 3rd, clocking a 54.30. Although she won’t be swimming the 100 individually, Schmitt will surely be on the 400 free relay.

Hardy being the only swimmer in the field to crack 54 seconds does seem to indicate the Americans may have an issue with the 400 free relay in London. A 54.00 and up split on that relay would make it virtually impossible for the US to have a real shot at taking down the Australians.