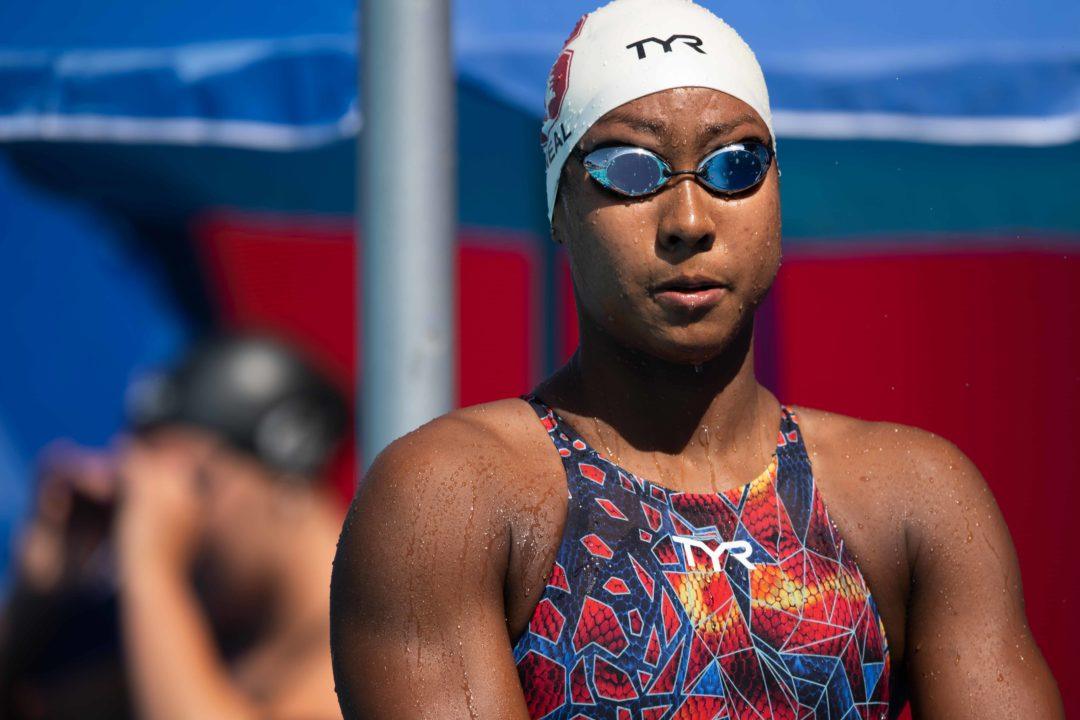 After taking time off to recover after Nationals, Neal relocated to San Diego at the beginning of October. Archive photo via Mike Lewis/Ola Vista Photography

After five years at Stanford as an undergrad and post-grad training with coach Greg Meehan, Olympian Lia Neal has confirmed she’s made the move south to join David Marsh and Team Elite in San Diego, California.

“I had five amazing years at Stanford that I wouldn’t trade for anything else. I really enjoyed my time training with Greg, Tracy [Slusser], and the volunteer assistant coaches that we’ve had like a throughout that time,” Neal told SwimSwam. “I gained a lot from my time being there, and the hardest part by far I think was leaving the team, because I love those girls.”

Neal, 23, has been credited by Meehan with sparking Stanford’s recent run of success by being one of the first elite swimmers to believe in his coaching abilities and commit to the school back in 2012.

“But I think five years is quite a long time for anyone, and in order for me to progress and like what I’m doing – especially something that I’ve been doing for 17 years – I need a kind of change of pace, and the opportunity to learn new things. I just needed to explore something new in my swimming,” Neal said. “Experiencing new things is kind of what motivates me in the sport.”

Neal added that following the 2018 Phillips 66 National Championships, during which she qualified for the 2019 FINA World Championships team on a relay, but missed the 2018 Pan Pacs team, she went back to Stanford and underwent MRIs on her shoulders and back, which had been bothering her. The scans revealed she had “SLAP” tears in both shoulders, which is fairly common for swimmers.

She headed home to New York for two months to focus on physical therapy, then moved to San Diego at the beginning of October.

“To train in a new environment, it feels completely refreshing, like starting off with a clean slate,” said Neal, who in the past on multiple occasions took trips to North Carolina to work with Marsh when he was based there. “In terms of what I did to take care of my body, but also just to move to someplace completely new, and work with the team where it’s all grads and pro swimmers, so we’re all on the same page and have the same goals.”

Neal is a two-time Olympic medalist and led the Stanford Cardinal to NCAA titles in both her junior and senior year.

Good for Lia! I hope she succeeds in San Diego. I didnt realize she used to train with Marsh for weeks at a time.

I think this is a good move. Just wondering who is in Marsh’s sprint pool to push Lia to that sub-53 flat start?

I think leaving their college training setting, however successful that was and however bittersweet it may be, is the right move to adulthood for many-if-not-most swimmers after graduating. Sounds like a really smart next step.

Lia is liked everywhere she goes by swimmers and coaches alike–I am sure she will do great here.

Has Kathleen Baker moved to SD, or has she chosen to stay at Cal?

She’s still a senior at Cal….