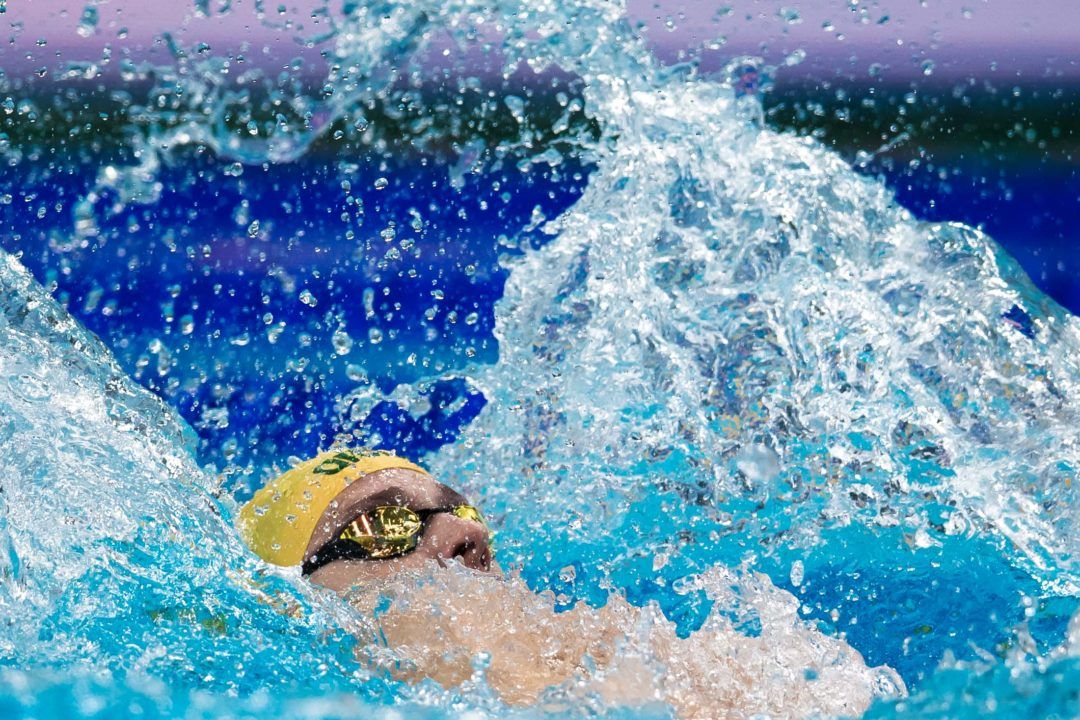 Aussie Mitch Larin has found his groove again since moving back to St. Peters Western, claiming his 4th invidiual title of these Pan Pacific Trials.

Clocking 8:22.82, Titmus took the 800m free gold well under the 8:30.66 Pan Pacific qualifying standard set by Swimming Australia and represented the only sub-8:30 swimmer in the race. Titmus won Commonwealth Games gold  just weeks ago in a time of 8:20.02, a mark which remains as the 3rd fastest effort in the world this season.

Behind Titmus tonight, but still under the QT, was Kiah Melverton. Melverton already wowed the crowd with a 1500m victory and a 400m free runner-up performance here in South Australia. The 21-year-old TSS Aquatics athlete notched a mark of 8:30.45 for silver tonight to log another event to her Pan Pacs line-up.

Her time this evening outperformed the 2:07.86 McKeown produced for 4th place at the Commonwealth Games and now situates her as #7 in the world…at just 16.

In the absence of world champion Emily Seebohm, who withdrew from the competition due to personal matters, Minna Atherton claimed silver in 2:08.75, while Sian Whittaker took bronze in 2:11.49.

For the men’s edition of the 200m back race, Mitch Larkin followed up his 200m IM, 400m IM and 100m back victories with an impressive 4th individual gold in a Pan Pacs qualifying effort. 1:55.40 is what the 2015 two-time world champion and 2016 Olympic silver medalist produced to slide under the 1:56.11 qualifying time tonight.

Bradley Woodward was about a second behind in 1:56.42 for silver, while 100m freestyle champion here in South Australia, Jack Cartwright, wrangled up bronze in 1:58.53.

Larkin took gold on the Gold Coast in 1:56.10, so tonight’s performance checks-in as his first sub-1:56 time of the season. He now moves into the #2 position among the world’s best this season, jumping ahead of Pan Pacs rival Ryan Murphy of America.

Larkin’s time no doubt will give the 24-year-old confidence that moving back to St. Peters Western after a stint under Simon Cusack was the right move for him.

Speedster Cate Campbell doubled up on her 100m free gold here with a dominating victory in the 50m sprint. C1 clocked 24.12 to snag a QT, although she has already qualified on the Gold Coast. Runner-up tonight was Shayna Jack in 24.70, with Holly Barratt next in 25.03.

James Roberts was the men’s splash n’ dash victor, scoring a winning time of 22.36. Grayson Bell and David Morgan finished in 2nd and 3rd in times of 22.43 and 22.44, respectively. No one was able to touch the stiff 21.77 selection standard, however.

After proving that her 2-week stint among elite American breaststrokers Cody Miller and Lilly King at Indiana University did her stroke some good, Jessica Hansen was back in the pool with another best time. Hansen was tonight’s top 200m breaststroker, winning in 2:25.56, a new personal best by about half a second.

Although her time tonight was outside the 2:23.81 QT, with the 100m breaststroke under her belt, Hansen will most likely get a chance to race this distance in Tokyo.

Zac Stubblety-Cook also logged a personal best, however, his was of the more monumental variety. With a winning time of 2:08.65, Stubblety-Cook dipped under the 2:10 threshold for the first time in his career to successfully capture a Pan Pacs qualifying standard. He also now checks-in as the 10th fastest swimmer in the world.

Runner-up tonight was Matthew Wilson, bronze medalist at this year’s Commonwealth Games. Wilson already snagged his slot on the Aussies Pan Pacs roster with his 2:08.64 from those Games. Under training, Wilson was still sub-2:10, registering a runner-up effort of 2:09.10. Alex Milligan wound up 3rd tonight in 2:11.54.

Post-race, the pumped-up Stubblety-Cook said of his qualification, “I still can’t believe it,. My Commonwealth Games was pretty disappointing – just choking, really, that’s the only way to put it.

“Coming back from that and working off that I knew I had to step up to get some more confidence. I’ve always trained really well and put together training well but never executed it in a race.”

its his fastest time since rio, it would have gotten him 6th in budapest. Definitely an improvement from last year. Perhaps there is some hope for him getting back to his 2015 form after all.

I’m sure Mitch cares what you think

I would certainly hope he doesn’t care what I think. Just not sure what the big deal is about a mediocre swim for such an elite athlete who has performed much better.

So happy for Zac Stubblety-Cook-cool.. and I’m glad we’re getting some emerging 200m breastrokers in an event where Australia has been weak.. I wish I could say the same thing for the fly events .. stil no young guns coming through to challenge the established lads

Yet they pick a larger team for para pan PACs….para sports where everyone gets a prize.