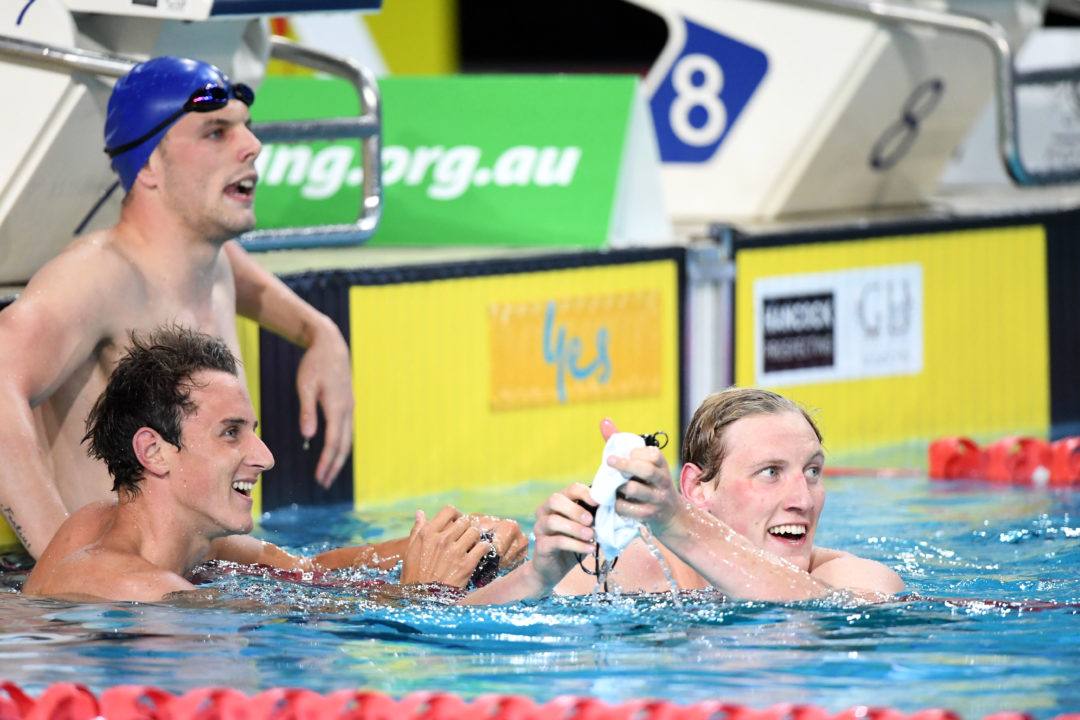 Look out for Kyle Chalmers, Mack Horton and others to fire off some speedy times at the Pan Pac Trials coming up in early July. Archive photo via Delly Carr / Swimming Australia Ltd

The 2018 Commonwealth Games served as one opportunity for Australian athletes to book their places on their nation’s Pan Pacific Championships roster, but the second qualification meet is now almost upon us.

The Pan Pac Trials are headed back to the South Australia Aquatic & Leisure Center in Adelaide, where the biggest Aussie stars will convene at the home pool of Marion’s Olympic champion Kyle Chalmers from June 30th to July 4th. Along with expected competitors Mack Horton, Ariarne Titmus, and Emily Seebohm, newly-minted Marion Swimming Club members Brittany Elmslie and Madi Wilson will be racing in their new home pool.

Per the Australian Pan Pac qualification criteria, a maximum of 52 swimmers (26 male/26 female) will be selected to compete in Japan. The first, second and third placed eligible athletes in the final of an individual Olympic event at the Commonwealth Games will be selected to the Pan Pacific team, subject to the time that they swim in the final equaled or beat the QTs listed at the bottom of this piece. Athletes who met this criteria considered a ‘Priority 1 athlete.’

As we kept track of the qualifying time-attaining athletes throughout the Commonwealth Games, here’s how the squad shapes up thus far, knowing swimmers may opt out of swimming the event and/or additional swimmers may be added via these Trials.

All eligible athletes in the ‘A’ Final of an Individual Olympic Event at the 2018 Pan Pacific Swimming Championship Trials will be selected to the Team subject to the time that they swim in the ‘A’ Final equaling or beating the SAL Qualifying Time, but they will be considered Priority 3 athletes. Note that the Pan Pacific Championships does not restrict the number of athletes per nation that can be entered per event into the heats. Therefore more than three athletes per event could potentially selected onto the team.

You can view the table of qualification times below.

There’s a massive structural difficulty for the Aussies that it’s a massive country with not many people in it (24 million, or London and the surrounding area) and everyone living at the edges.

Creating a couple of really high performance centres like the UK has at, particularly, Loughborough and Stirling is a harder task when swimmers moving across the country doesn’t mean a 3-4 hour drive from family but long haul flights.

Wishing them the best !! Pan Pacs should be great this year with the Japanese organisation quality & all the other nations ready to compete at the Highest level .

I don’t understand the arrogance of this message.. Australia is first to admit things have not been going right and trying to address it post Rio.. of course USA will kill it at Pan Pacs was that ever any doubt!??

Exactly, the Americans as proved in Rio & many other meets is by far the greatest swimming nation in the world. The Aussies are amongst a few nations competing for no 2 spot, but are a long way back. What the Americans have got is greatness & depth.

And 14 times the population.