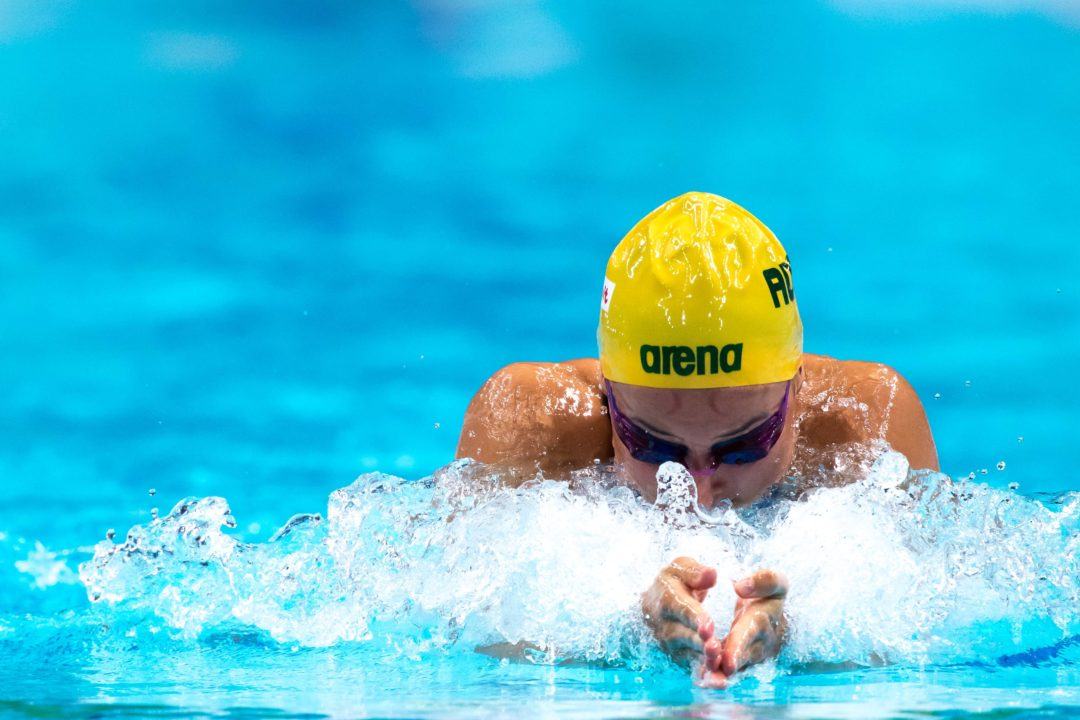 Most big-time Aussie swimmers are in-season training, having already qualified for the Pan Pacs; but, Jessica Hansen rocked a QT tonight to book her ticket to Tokyo. Archive photo via Mike Lewis/Ola Vista Photography

With the biggest names on Australia’s national team already having notched Pan Pacific Championships qualifying times at the Commonwealth Games, tonight’s performances in South Australia were slightly on the quiet side. Kyle Chalmers, Mitch Larkin and Emma McKeon were among the Olympians in the pool, but, as they’re under heavy training, these Trials acted as just another in-season meet for them en route to Tokyo later this summer.

Alexander Graham finished in 1:47.18 for bronze, while Thomas Fraser-Holmes, competing in his first meet since serving an 12-month ban for missing doping tests, finished in a respectable 1:48.06 for 5th. With a Pan Pacs QT of 1:46.28, no men were added to the roster from tonight’s race.

The women’s race was also rather subdued time-wise, as the top 3 women were well shy of the Pan Pacs cut of 1:56.34. West Australia’s Brianna Throssell led the charge, taking the gold in 1:58.09, while Mikkayla Sheridan touched less than .3 later in 1:48.33. Olympic bronze medalist Emma McKeon rounded out the top 3 in 1:58.61.

McKeon, along with teen dynamo Ariarne Titmus, has already qualified for the Pan Pacs roster in this 200m free event. Titmus’ time on the Gold Coast was particularly impressive, as the 17-year-old’s mark of 1:54.85 currently ranks as 3rd fastest int he world.

Although Titmus wasn’t in the women’s 200m free event tonight, the Tasmanian teen was still in the water contesting the 400m IM. Clocking a new personal best in this new event for her, Titmus finished 4th in 4:46.61. The top 3 spots belonged to Blair Evans, Kaylee McKeown and Tianni Gilmour, although none was able to capture a Pan Pacs QT.

On a high note, Jessica Hansen did capture a Pan Pacs qualifying time tonight en route to topping the podium in the women’s 100m breaststroke. Clinching gold in 1:06.74, her effort dipped just under the 1:06.81 cut and beat out 2nd place finisher Leiston Pickett (1:07.09) and Georgia Bohl, who touched in 1:07.48 for 3rd.

Looks like the swimmers are not tapered for this meet .. not expecting flash times based on the first two nights so far ..

Chalmers, horton, titmus and a few others already made a QT in all their events at CG, so for them this is just a hit out before taper. The only people who are tapering are people who still need to qualify.

Packard is a lock, the QT’s are just ridiculous as they are the 8th place at last years worlds. Blair Evans has the 8th fastest in the world and doesn’t even qualify!
Great swim by Jess Hansen, well deserved and looks like the 2 weeks of training with Lilly King was very beneficial. Look to see more Aussies going over to the US with the change in the Aus trials date.

‘well under the Pan Pacs’ QT is a strange expression. ‘well outside’ would be the better phrase,

Totally. They are well over the QT or well outside. To be well under the QT would mean they have qualified easily.

Best bit about night 1 was watching Em Seebohm swim 100m breast. As an IMer know she can do a little bit of breaststroke, but I don’t think I’d ever seen her swim a straight Breaststroke race at national level. Even as a junior she was much more a fly/free sprinter, who did some backstroke and IM as well. Interesting that she turned into a backstroker in the end.