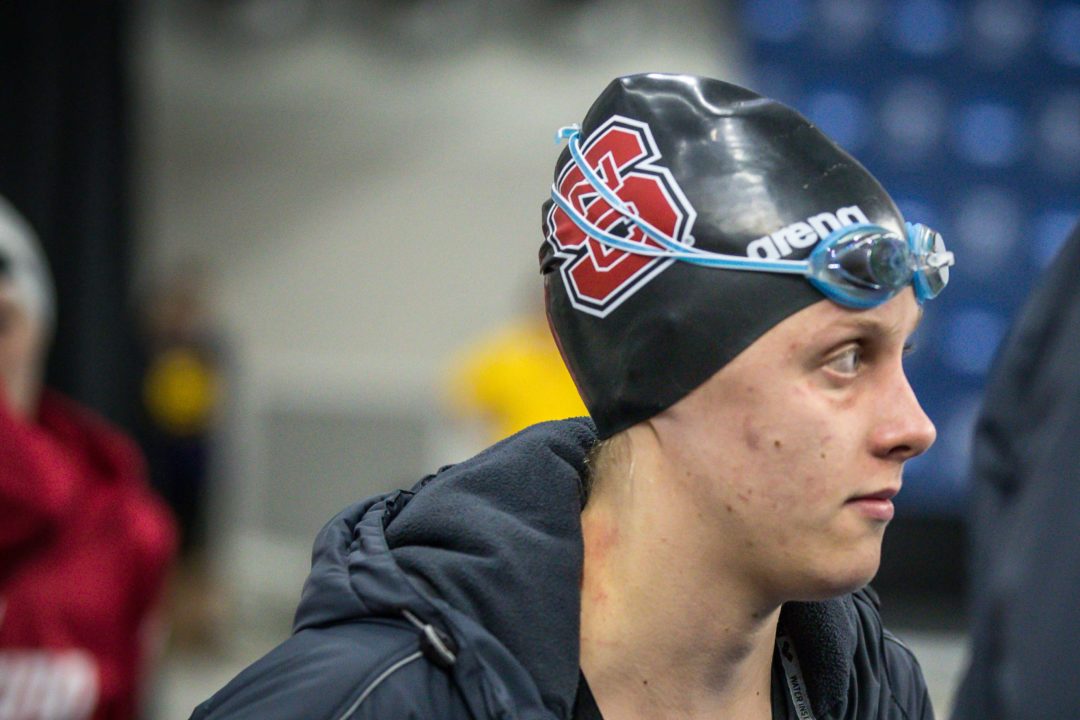 Though Alons raced only sprint free and back individually at ACCs, she believes her best performance came in the 400 medley relay on Friday night. Current photo via Jack Spitser/Spitser Photography

Though Alons raced only sprint free and back individually at ACCs, she believes her best performance came in the 400 medley relay on Friday night. Swimming the butterfly leg, Alons split a 50.34, holding off 100 fly champion Kate Douglass from Virginia who was only narrowly faster with a 50.29 split. Other than Louisville’s Grace Oglesby who split a 51.10, nobody else in the field clocked a 100 fly split faster than 52 seconds.

This turned out to be the same top three finishers as last year, albeit in a complete different order. NC State sophomore Kylee Alons took the win today in 21.63 after finishing 3rd last year in 21.81.

For the second year in a row, UVA’s Morgan Hill and NC State’s Ky-lee Perry touched at almost exactly the same time. Once again, it was Hill who just got her hand on the wall first, out-touching Perry 21.76 to 21.78 tonight. Last year, Hill out-touched Perry 21.68 to 21.69 for the win.

Louisville earned some big points here, as Casey Fanz matched her prelims time of 21.89 for 4th, Christiana Regenauer took 5th in 22.10, and Arina Openysheva touched 7th in 22.26. Virginia Tech’s Joelle Verbeb shaved off a bit of time to take 6th in 22.20. Duke senior Alyssa Marsh appeared to have the lead early, but seemed to have an issue coming off the turn, ending up 8th in 22.30.

UVA freshman Lexi Cuomo knocked almost half a second off of her prelims time to win the B-final in 22.00.

NC State freshman Katharine Berkoff earned her first individual ACC title with a 51.64 tonight. That was a bit off her 51.21 from this morning, but still enough to beat Virginia junior Caroline Gmelich, who took 2nd with a 51.88. Gmelich had a solid evening, taking 9th in the 100 fly with a new personal best time of 52.46 before tying her personal best in this event

Berkoff got NC State off to a fast start, swimming three-tenths faster than she individually, and staking NC State to nearly a one-second lead immediately. Hansson extended the Wolfpack’s lead with a 57.9 breast split, putting the matter essentially out of reach. Alons essentially matched 100 fly champion Douglass on the fly leg, 50.34 to 50.29. Hill did her best to close the gap, anchoring in 46.82, but Ky-lee Perry‘s 47.63 was more than enough, as NC State won in 3:27.22, setting a new meet record.

Kylee Alons is SUCH a talent! I believe her biggest challenge is figuring out her 3 best events.

One observation I made while going through heat sheets (because of the method I use to identify significant absences), is that the ACC, more than most conferences, is producing these kind of “5 or 6 event” swimmers. Don’t know why, if it’s the way they’re training, or the way they’re recruiting, or what. But, it was interesting to see that emerge as a trend.

Same on the men’s side, actually.