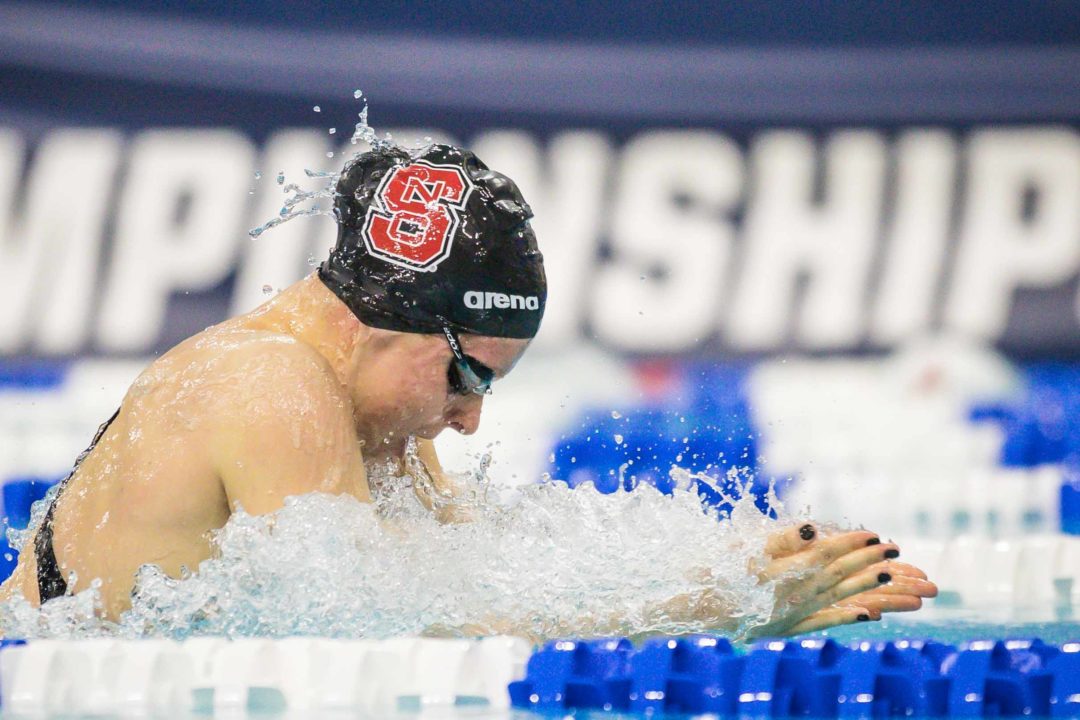 The 'A' final of the 200 breast turned out to be one of the most exciting races of the meet with each of the top-3 finishers achieving NCAA 'A' cuts. Current photo via Jack Spitser/Spitser Photography

NC State’s Sophie Hansson was the defending ACC Champion in the 200 breaststroke, but with star freshman Kate Douglass from Virginia also entered in the event and the fastest time in the nation coming into the meet, Hansson was going to have her work cut out for her.

The battle between Hansson and Douglass was fierce, and both found themselves challenged by another contender, University of Virginia freshman Ella Nelson. The ‘A’ final of the 200 breast turned out to be one of the most exhilarating races of the entire competition as Douglass struck out to an early lead with Nelson on her heels, though the Cavalier freshman were both gradually reeled in by Hansson, who managed to get her hands on the wall a mere 0.09 ahead of Nelson and 0.30 ahead of Douglass.

All three women finished with NCAA ‘A’ cuts, meaning we’ll get to see a rematch of sorts next month in Athens at the NCAA Championships.

After the session ended Saturday, SwimSwam caught up with Hansson to talk about what was arguably the most exciting race of the day.

Coming into tonight, this race was giving every indication that it would a great one, and it did not disappoint. Three underclassmen turned together at the final wall, and at the touch, it was NC State sophomore Sophie Hansson who defended her title with a 2:05.59 victory. UVA’s Ella Nelson took 2nd in 2:05.68, her first time under 2:07, and fellow Cavalier freshman Kate Douglass, who had the fastest time in the nation heading into tonight, took 3rd in 2:05.89. Those are personal bests for all three swimmers and are currently the top three times in the nation this year. Hansson is now 4-4 in the breaststroke races in her ACC champs career.