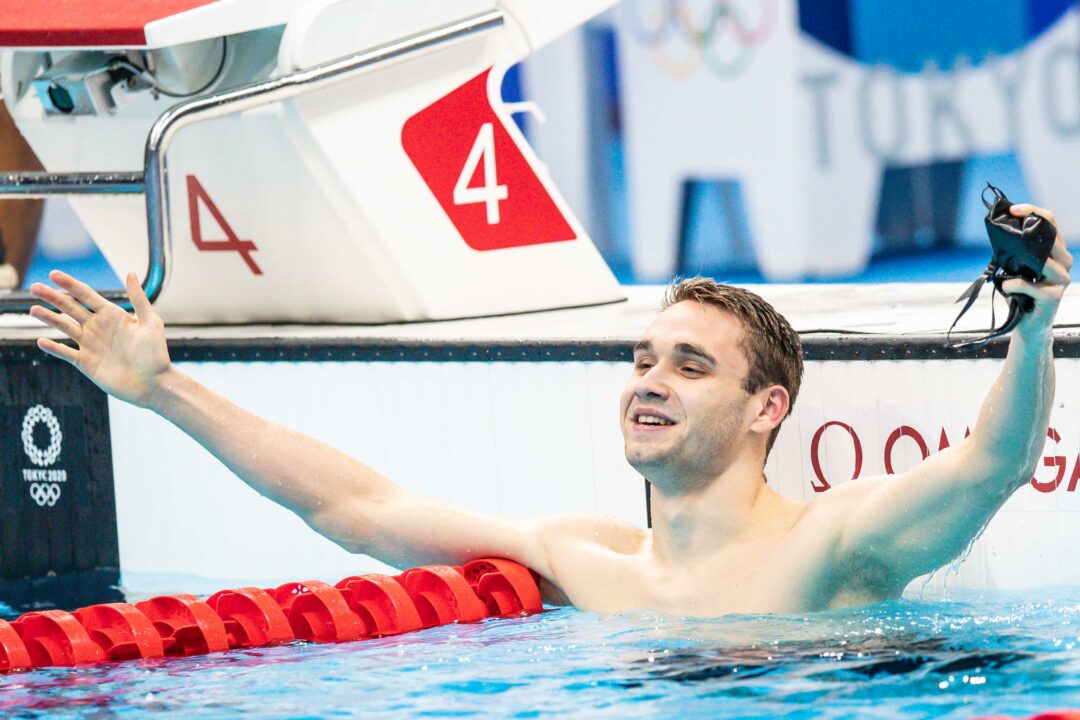 Stop #2 of the 2021 FINA World Cup Series got underway this morning in Budapest, with Kristof Milak making his presence known from the get-go. Archive photo via Jack Spitser/Spitser Photography

Stop #2 of the 2021 FINA World Cup Series got underway this morning in Budapest, with host nation swimmer Kristof Milak making his presence known from the get-go.

Kicking off his campaign in the men’s 100m fly, 21-year-old casually ripped a morning swim of 50.60 to lead the field, one which includes American Tom Shields and Aussie Matt Temple. The pair will flank the Hungarian this evening, having clocked times of 51.02 and 51.41, respectively.

Of note, South African Chad Le Clos was not in the field, despite having been on the start lists.

Young gun Matt Sates of South Africa was also in the water this morning, racking up finals slots in the 400m free and 100m IM. In the former, he posted a morning swim of 3:45.47 in the former and 53.67 in the latter.

Of note, the 4th-seeded swimmer Katja Fain earned a new Slovak record in the event with her heats swim of 4:05.22.

Aussie Olympic golden girl Emma McKeon did her thing in the 50m freestyle, capturing the top spot in 23.69, as teammate Kyle Chalmers bowed out of the 100m fly once again, but did take the 2nd seed in the 50m free in 21.29 to Dutch speedster Jeese Puts‘ 21.04.

Again, as in one of the previous posts about the WC: Katja Fain is a Slovenian, not a Slovak, swimmer
(that’s a difference). Similarly, for example, for those, interested in cycling: Primož Roglič and
Tadej Pogačar are Slovenians, whereas Peter Sagan is a Slovak.

He’s still good, like his 200 is better than like everyone out there, just not as good as when he is swimming long course.

Yes short course is not his strength. He already said that he hated SC. However this year he’s gonna do tons of SC, the World Cup, the European SC championships, the Hungarian SC nationals, and maybe the Worlds SC in Abu Dhabi. Anyway if he wants to sprint and turn better, SC is a good chance to learn.

Also milak is like not tapered at all. He probably did like 20x100s fly for cool down after this.

The times in the third paragraph got me tripping

Indeed it did. 🙂
Congrats to Tom Shields on a great win over Milak.

Mistakes happen; correcting them is what matters. (Besides, le Clos has made it kind of easy to forget about him this past year.)

“Resting for ISL” you mean.. jk

Milak may just be 48.9 in Paris depending on his potentially expanded schedule, with Caelebs known workload he’ll need the perfect race to keep up. Already counting down for next summer

If dressel doesn’t fix his turns and finish, Milak will take gold

Turns are more of a problem for Milak, as demonstrated in his short course loss to Shields today.