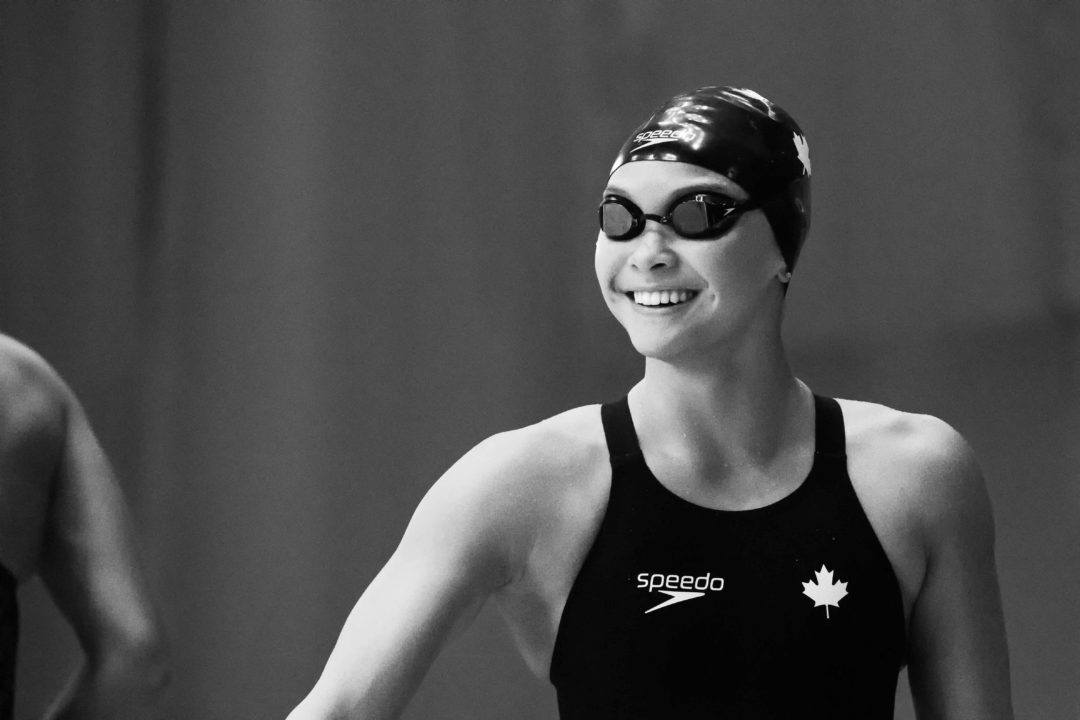 Canada has seen meteoric rises to the international stage from several teenage standouts on the women's side, and the rise of Kayla Sanchez continues Archive photo via Mike Lewis/Ola Vista Photography

Canada has seen meteoric rises to the international stage from several teenage standouts on the women’s side, and the rise of Kayla Sanchez continues. Sanchez, the 17-year-old who trains at the High Performance Centre – Ontario, put down a big performance tonight in Sheffield, highlighted by world junior records in the 100 free and 200 IM.

After going 52.01 in the 100 free prelims and tying Penny Oleksiak‘s Canadian record, Sanchez dropped down to a 51.45 to win the race over GBR’s Anna Hopkin (52.00) and Oleksiak herself (52.32). For some recent context, that time would’ve taken silver at the ongoing 2018 World SC Championships in Hangzhou.

Meanwhile, on the world stage, that time marks a world junior record. FINA only began recognizing WJRs in short course meters beginning in 2015, where they came up with benchmark times for short course WJRs. To date, most of those benchmarks haven’t been hit since 2015, leaving a bunch of open times waiting for fast juniors to break them. The FINA benchmark for the 100 SCM free for girls is a 52.09, and Oleksiak’s 52.01 from the 2016 World SC Champs is faster than that, but FINA has not ratified that time (for whatever reason).

In any case, Sanchez is a good half-second faster than both the benchmark time and Oleksiak’s time.

Sanchez now ranks 8th all-time in the 100 free and is tied for 7th all-time with Hungary’s Evelyn Verraszto and China’s Ye Shiwen in the 200 IM.

Is it about Huawei or did not China turn up in Windsor ? It is rude for the nation that hosts a championships to not turn up at the next one .
Simply why are they not in China If they are going to race s/c . It is a lost opportunity for their young swimmers or was the decision to arrest Meng made much earlier ( after all the paper work was done during Obama admin.) .?

I imagine it has something to do with being in Ben Titley’s training group – Kisil, Oleksiak, Sanchez etc. He brought a group over last year too.

Shorter meet, shorter flight, less time change – might get a better performance from the swimmers, most are still in school – less time missed there. There are a lot of people missing from worlds for various reasons – many because of the timing and the fact that they are in school or competing in college in the USA. Meet entries were due and travel plans were made long before the Meng arrest. I wouldn’t read anything into that – just simply a choice made by swimmers and their coaches on what is best for them mid-way through this Olympic cycle.

The selection criteria for this year’s championships meet was decided LONG before Huawei’s recent events. They decidedly chose to focus more on prep for this summer’s LC meets for Olympic prep, so WC SC champs isn’t a priority in the 3rd year of an Olympic cycle. (Also note how some of the USA’s team is missing some top stars).

I’d like to see athletes make the choice .where they want to go . National federation’s should not be deciding for them , they just put on the races .

No, there needs to be organisation and unity

Did you say that about Fina?

1) performance planning is done years in advance;
2) teenaged athletes do not do their own quadrennial and annual planning;
3) youngsters need to do international meets in stages to maximize their accumulation of high level experience.

We are Canadian. We do things different than the USA.

Canada sent a development team to SC worlds (not terribly uncommon for many countries). https://swimswam.com/haley-black-drops-nearly-eight-tenths-to-set-canadian-record-in-50-fly/

Would have been second at worlds. Where’s Canada?

Their selection criteria for SCM worlds excluded anyone who was on the pan pacs team. Not sure why they did that because Masse and Ruck got gold at pan pacs and their womens relay teams would have medaled at worlds.