Katie Ledecky To Skip Duel In The Pool This Summer 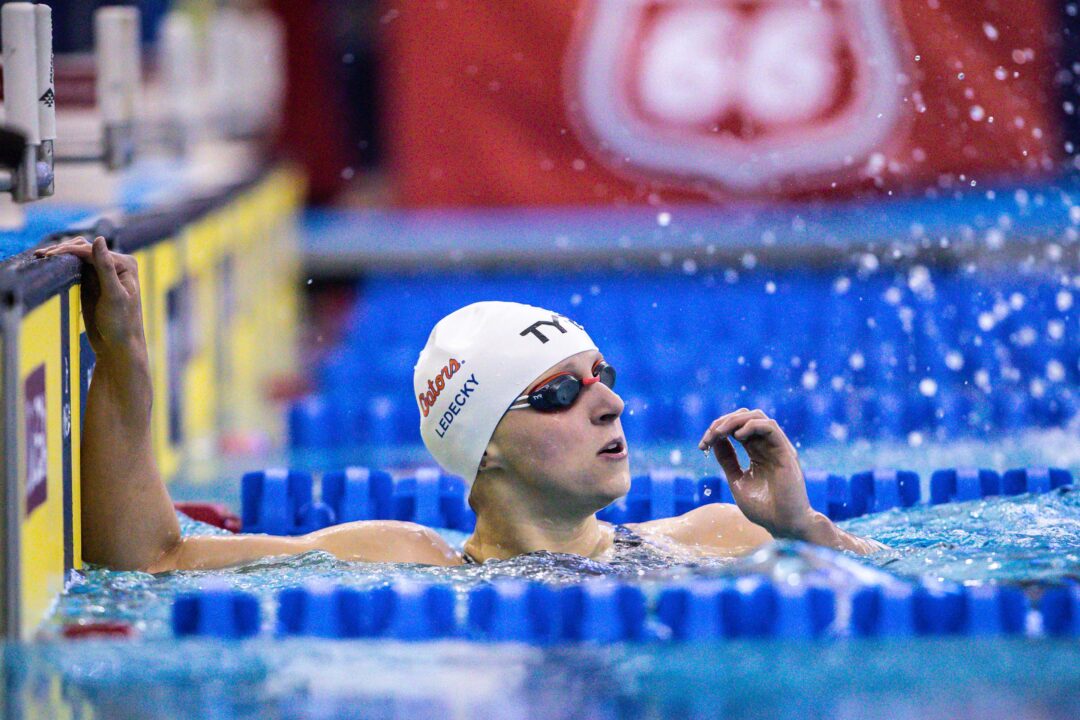 In an interview with NBC Olympics, Ledecky discussed her decision to skip the Duel In The Pool and why she dropped the 200 free from her Worlds lineup. Archive photo via Jack Spitser/Spitser Photography

In an interview with NBC Sports, swimming superstar Katie Ledecky revealed that she would not be racing in the USA vs. Australia Duel In The Pool competition this August. This announcement comes just a week after her rival Ariarne Titmus said that she was unsure about attending the same meet, citing the external pressure of having to race Ledecky as one reason.

This announcement comes despite the fact that Duel In The Pool had been billed by many media outlets as a showdown between Ledecky and Titmus. Ledecky had already planned her 2022 schedule last fall, which was months before the competition was announced.

With Ledecky competing at the upcoming FINA World Championships and Titmus opting to skip the meet in favor of the Commonwealth Games, Ledecky’s decision not to go to Duel In The Pool means we don’t get to see any head-to-head races between the two swimmers this year.

Ledecky was asked about Titmus’s decision not to swim at Worlds, and how she felt about the Aussie breaking her world record in the 400 free at Australian trials.

“I don’t have too strong of an opinion one way or the other,” Ledecky said of Titmus skipping Worlds. “Of course, I always want to race the best. But she’s made a decision that she feels is best for her moving forward.”

About her world record being broken, Ledecky said she was expecting it.

“I had seen how she was swimming that whole week at her trials,” Ledecky said. “She was right on her times, and I knew it was a real possibility. So I wasn’t surprised. It’s great for the sport, great to have somebody like that to race at these meets. And I know that there are other swimmers as well in that event that are coming up that are going to be very competitive over the next couple of years. So definitely keeps me on my toes. And I think we’ll continue to have some great races.”

In addition, Ledecky also discussed why she dropped the 200 free from her Worlds schedule. She said that she wanted to focus more on longer distance events, something that she discussed with her coach Anthony Nesty when she moved to train at the University of Florida last fall.

“I wanted to not have a double this year and see what I could do with a mile and just kind of lighten my load a little bit,” Ledecky said.

Ledecky still swam the 200 free at U.S. trials to be on the 4×200 free relay, and will continue swimming the event for that reason. However, her status in the individual 200 free is something she hasn’t decided upon yet.

“We’ll kind of see how things go this summer,” Ledecky said. “I continue to feel confident in my 200m free, and I’ll definitely be targeting it for the relay. But yeah, we’ll see individually what makes sense moving forward. It definitely would be more on the table if the schedule does open up a little bit more and creates a little more rest in there.”

When asked about the potential for her to break Michael Phelps‘s record of 15 individual world championships titles, Ledecky replied by saying that it was not one of her targets.

“I definitely have always been somebody that’s valued quality of swims over quantity and medals,” Ledecky said. “And I’ve never set goals for a certain number of medals or certain records like that.”

If Ledecky wins the 400, 800, and 1500 free this year, she will have 3 more world titles added onto the 11 she has now. This will put her at 14 titles, just one less than Phelps. However, if she repeats and wins these three events next year at the 2023 World Championships, she will be at 17 titles and break Phelps’ record.

Perhaps those “media outlets” advertising the showdown between Ledecky and Titmus should have checked with them first.

Remember the Swimswam article that reported Titmus is thinking of skipping Duel in The Pool, and people were thrashing on Titmus?

Ledecky is swimming at worlds though. At this point we don’t want Ledecky to needlessly extend her season for a meaningless duel meet on the other side of the world unless she really wants to go. Titmus race would be her only motivation

This whole duel idea I think was probably created earlier when people were still worried about covid and opportunities for a big swim meet at the end of the season. They seem to have worked past that but USA and Australia pushed ahead anyway even though the meet is not really needed anymore. Aren’t the Aussies sending some younger swimmers to the USA for summer nationals? I give them points for trying to help but it seems extra at this point. They should pull the plug if too many big names back out.

Rest up Katie…..save your legs for Paris

Isn’t swimming, like, the #1 sport in Australia?? I would think they’d be willing to pay some big $$$ to make Duel in the Pool a big prize-fight kinda draw. Maybe I’m wrong, but if you paid them enough, wouldn’t any professional swimmer consider making the meet a priority meet? Are there too many competing priorities with top swimmers these days? …and maybe just not quite enough money in the sport yet? God bless today’s full-time coaches and athletes figuring out all the training and tapering and traveling schedules. Shew.

Swimming is not the #1 sport in Australia. It wouldn’t be in the top 10. I would say less than 10% of the population could even name a single Olympic swimmer outside of gold medal winners. 2019 World Champs weren’t even televised in Australia because no one knows about it and no one cares.

That’s partly why I was shocked to see Duel in the Pool announced because I doubt they’re going to make any money off it. I believe the total prize money available to both teams is $100k. Not exactly a significant prize pool to be shared between 30+ swimmers.

It’s absolute nonsense to say no-one cares about swimming in Australia. Of course interest peaks around each Olympics, when it is clearly the Olympic sport that attracts the most interest in Australia (by a large margin). There will be significant interest in swimming in the next few months, particularly around the Commonwealth Games, despite it being a lesser meet than the WCs. There have been plenty of TV and newspaper reports about swimming in the past 4 weeks, concerning the Australian performances at the trials/national championships, particularly the 2 world records.

As for your comment about few people being able to name swimmers other than gold medallists, the gold medallists are, of course, the most well-known swimmers. Your argument boils… Read more »

James is closer to the money than you think. Swimming IS AUS most successful Olympic sport but like all Olympic sport, fades into general insignificance outside those windows every four years. Yes, there may be some media mention but its crowded out by the dominance of the major professional football codes during the AUS winter and to lesser degrees cricket and tennis during the summer.

There are the odd exceptions such as when a sport may host a World Championships such as will happen with road cycling later this year but again, these are exceptions. CommGames will get some attention but is still competing up against the various football codes in the media and time differences for most peak… Read more »

Obviously when I say ‘no one’ I do not literally mean ‘not a single person’. It’s hyperbole. But swimming is an extremely niche sport. I do not know a single person who could name Mollie O’Callaghan, who is a WJR holder and favourite for multiple medals at WC and a triple Olympic medallist. Swimming gets attention at the Olympics because it tends to be where most of our medals come from, and the news always reports every medal we win. It’s not because swimming is popular. Even with the world records, I doubt even a quarter of the population could name Zac Stubblety-Cook (but Titmus does appear to be a household name).

I would say the vast majority of the… Read more »

In the USA, men’s football (not to be confused with soccer) dominates the professional and collegiate landscape.

I had a coworker from Australia and o asked him about it. He looked at me confused and said the only time people care about it during the Olympics and it’s mainly because they do very well for a small country. It’s far from the Super Bowl of Australian sports our coaches make it out to be.

wow. most Americans like myself believe that swimming is a significantly more popular sport in Australia than our country (to the masses). this is news to a lot of us

Just curious, where does association football (soccer) rank amongst the sports in Australia?

The timing of this meet is quite poor especially when you consider there will be short course world champs in Australia a few months later. For Australians there is trials, WCs, CWGs, Duel in the Pool, short course trials (not sure?), short course WCs. This is just too much and Duel In the Pool seems the most likely meet to be skipped.

Duel in the pool sounds like a ratings flop. A bunch of virtual unknowns outside of swimming circles competing in some random swim meet.

I wonder if the Australians will show up well – if only because it’s an easier trip.

These so-called Duels always sound so tantalising on paper ……. its just those annoying real-life issues of when, where, who’s paying that get in the way, particularly with regards to availability of peak talent.

Whilst not against a return of such meets, bringing it back this year and on the back end of such a muddled calendar was complete “what were they thinking ?” material.

Best that they nix it for this year and maybe look at either late Q1 2023 or the post Worlds window; particularly if ISL cannot be resuscitated.