Ledecky/Titmus Duel In the Pool Showdown May Not Happen 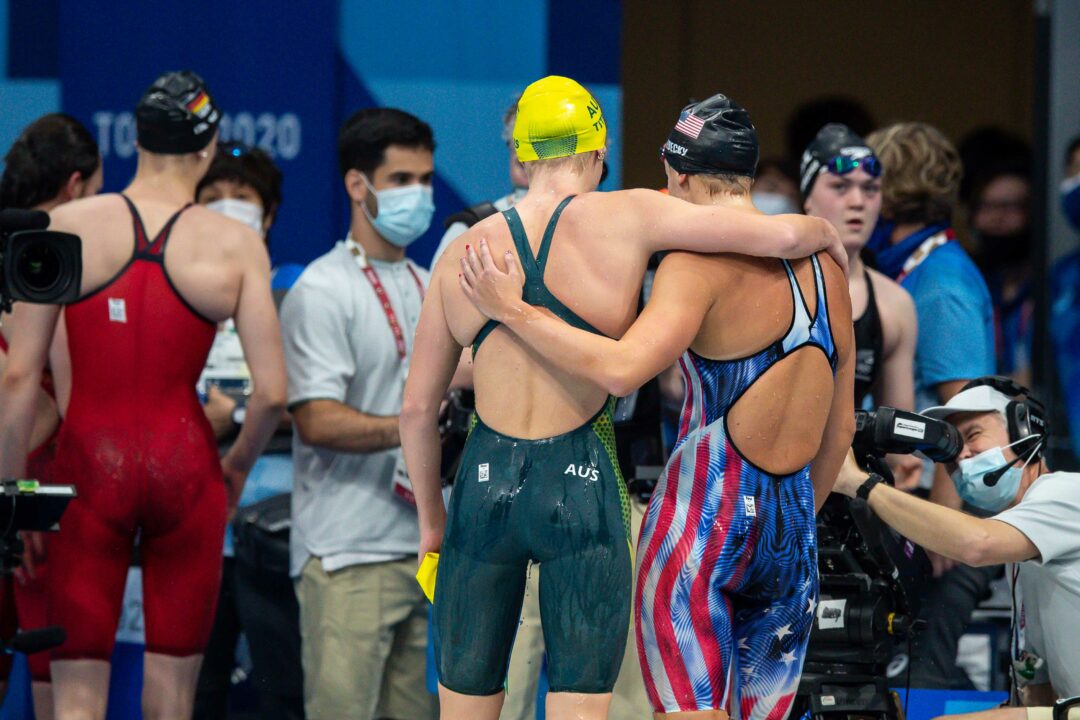 Dueling titans in the pool, Ariarne Titmus of Australia and Katie Ledecky of the United States may not meet head-to-head this summer. Archive photo via Jack Spitser/Spitser Photography

Multi-Olympic medalist Ariarne Titmus of Australia already made major waves for 2022 on her home soil, breaking the iconic American Katie Ledecky‘s World Record in the women’s 400m freestyle. The seemingly-unbreakable record went down at the Australian Swimming Championships earlier this month, with Titmus clocking a monster time of 3:56.40.

As we reported, even with that momentum behind her, 21-year-old Titmus has opted out of the FINA World Championships, instead steering her focus to the Commonwealth Games set for July. There in Birmingham, Titmus can take on a multitude of events, including the 200m free, 400m free, 800m free and relays.

With Titmus not headed to Budapest that means the sought-after freestyle skirmishes between her and Ledecky won’t be happening there.

Now, however, also to the dismay of fans of the Titmus/Ledecky rivalry, another competition on the international calendar may see Titmus forego an appearance.

Reuters is reporting that Titmus is possibly going to bypass the much-anticipated Duel in the Pool, a head-to-head battle between the Australians and Americans. After a 15-year absence, the celebrated Duel in the Pool is slated for August 19-21 in Sydney.

Read more about the Duel in the Pool’s comeback for 2022 here.

That potentially means no side-by-side showdown between Titmus and Ledecky in the 400m free, as well as other mid-distance freestyle events.

Titmus said this week, “Still deciding on Duel in the Pool.

“I know people are looking to see if I’ll be racing Katie, it’s always a very highly anticipated battle. But the battle with her comes with external pressure.

“Last year was huge for me, mentally too, a lot of pressure around my races. I didn’t really want to have to deal with that pressure again (at Budapest), said Titmus. (Reuters)

Even before the Duel in the Pool, however, Titmus acknowledges she won’t skate by easily in Birmingham. The Dean Boxall-trained star points to 15-year-old phenom Summer McIntosh of Canada as quickly becoming a threat.

“I remember when I was Summer’s age, I wasn’t swimming 4:01, 4:02,” said Titmus. “And she doesn’t have the strength yet that we have and when she does she is going to be a force to be reckoned with.”

McIntosh currently ranks #3  in the world in the women’s 400m free, having produced a monster swim of 4:01.59 last month, a mark which would have placed 4th at the Olympic Games in Tokyo.

Although not on Titmus’ event lineup, McIntosh also owns the #1 time in the world in the 400m IM, having nailed a new World Junior Record time of 4:29.12.

You can read our women’s 400m free, as well as all World Championships event previews, here.

Titmus recognizes this talent and forewarns about the 2024 Olympic Games, “There is this unbelievable depth … In Paris the race won’t just be between Katie and I.”

Macintosh is truly a talent and well trained across the spectrum. But Titmus and Ledecky shouldn’t forget about the Sandpipers girls. Ron is a smart coach with careful multi-year plans as all coaches should but don’t use. Katie has greatly improved her stroke this year — I had done a comparison between her and Titmus showing Titmus’ stroke superiority in terms of rhythm and less drag last year. The Florida coaches fixed a lot of her problems, unafraid to meddle with the goat’s shortcomings. Every swimmer can improve and Katie shows traditional greatness in making those changes. Hard to tell who would win this 400 race, but Titmus definitely would have to race to beat Katie. Interesting that she is… Read more »

When a swimmer candidly mentions that she does not want to go through the stress of racing one of the the greatest female swimmers this world has ever seen, we accuse her of being scared and afraid or being a coward. According to us, Titmus has no right to take it easy for a year to help her mental health and she has no right to train without the added stress of racing Ledecky. We do this to a swimmer who has beaten Ledecky twice now, won an Olympic Gold Medal and just broke Ledecky’s world record. I believe she has proven that she is a strong competitor, far from being scared.

Then, we talk about mental health and how… Read more »

Not going to go there re Titmus/Ledecky but rather the core issue of the so-called Duel.

These events always seem such brilliant ideas in concept; its the actual real world issue of when and where to hold them …. and then ensuring sufficient peak talent participation that has led to them being damp squibs in the past and their eventual discontinuation.

Whilst not specifically against their resuscitation; bringing them back this year of all years with the insanity that has ensued with the calendar is really “not too bright” on the part of those organising the meet. Let’s just look at the factors lining up against it …. even before we see withdrawals:

Ita fresh gor her to be honest about this. Im sure this is some of the reason for chalmers skipping free at worlds (im aware of the surgeries) but not everyone would speak with such vulnerable candor

I hope Ledecky gets that 400 record back at worlds. It’s her first event. Not impossible!

I understand. She has broken Ledecky’s record in the 400, beat her at the Olympics and WC’s, and just wants some peace in the event to go her fastest this year, an off year, without all the hooligans trying to make not a rivalry, but a US-AUS hatred battle. This isn’t a rivalry to a lot of swim and non-swim fans, it’s legit a war between countries. As the photo above shows, it appears they are actually friends and friendly rivals. I’d be sick of all the tabloids incorrectly touting my relationship with not only my pet event, but with another international legend. Wouldn’t be surprised if the two do things like text each other and plan their season to… Read more »

i guess i meant war between keyboard warriors lol

btw she looks way taller than Katie on the picture.

I think it’s a posture difference.

so she said she wanted to take it easy this year, free from the pressure. (In a take it easy year, she broke the World Record in the 400 free), Therefore she is skipping Bp. If there is another meet this year where she could race Ledecky and she skips it too, how is that different from generally just avoiding pressure this year? What is the big deal???

BTW. great sportsmanship – the way she talks about McIntosh

The sportsmanship between all the top swimmers is incredibly aspirational and respectful – I don’t know why the comments here can’t learn to do the same.

Exactly, most Aussies I know are in awe of Ledecky & what she has done for the sport.
The same people are trying to make the same rivalry between Chalmers & Dressel, they have the upmost respect for each other.