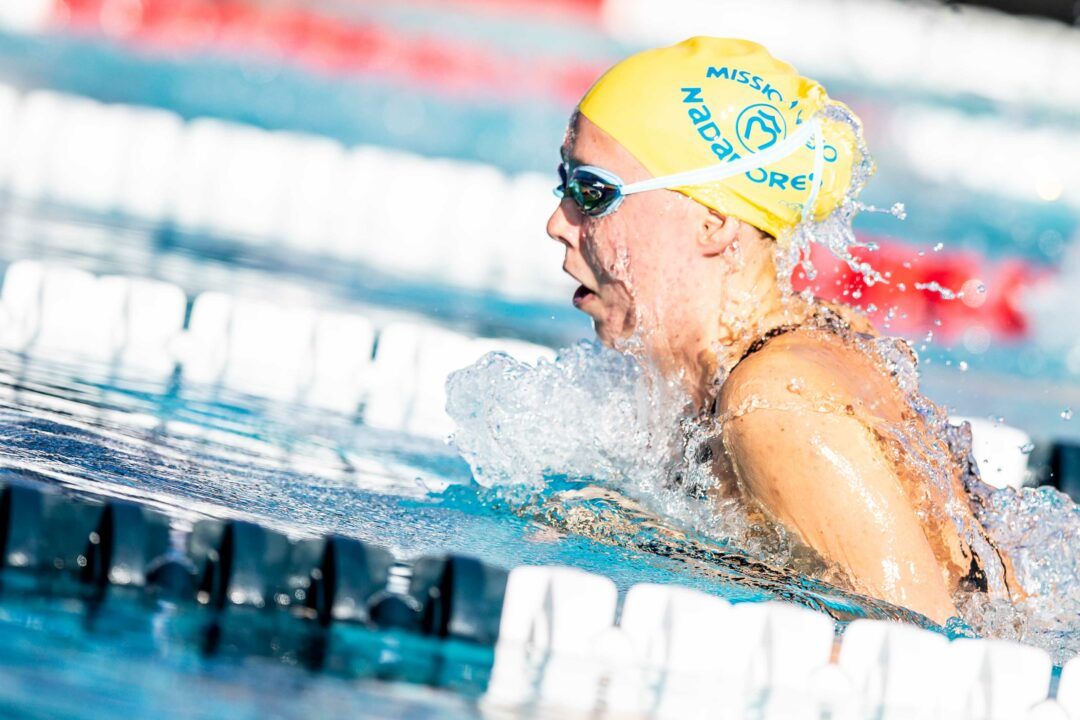 Her 29.75 tonight was exactly 1 second faster than the fastest freestyle split in the final of the women's 200 IM at the Tokyo 2020 Olympics a few weeks ago. Current photo via Jack Spitser/Spitser Photography

The bigger story, however, is the most recent in a long line for Kozan. That would be her absolutely incredible closing speed in the 200 IM. Kozan has made waves before for bringing 200 IMs home in under 30 seconds on freestyle, and she did it again tonight. Her free split tonight was 29.75, which was the fastest split in tonight’s field by nearly 2 seconds.

More impressively is how Kozan’s free split stacks up against the best in the world. For example, her 29.75 tonight was exactly 1 second faster than the fastest freestyle split in the final of the women’s 200 IM at the Tokyo 2020 Olympics a few weeks ago. 200 IM Gold medalist Yui Ohashi of Japan posted the fastest free split in the Olympic final, a 30.75.

Here are the free splits from all 8 of the women’s 200 IM Olympic finalists:

Here is a split comparison between Kozan’s personal best swim and her swim from tonight:

Firstly, it’s notable that her free splits on both occasions were under 30 seconds. She was slower on fly and back tonight than she was in 2019, but she was also significantly faster on the breaststroke 50. Tonight, Kozan was 1.40 seconds slower on the first 100, but she came home 0.99 seconds faster on the 2nd 100 than her 2019 performance.

*Though Pickrem now represents Canada internationally, she is a dual citizen of the US and Canada.

Enough with the MA comments. This article is about Kozan.

Agreed! Please don’t take away from Justina who is an unbelievable competitor! Still in high school and has a huge future!

Literally came to the comments just to see people say it was faster than MA. They did not disappoint

The results-reading AI is back again.

MA doesn’t even have to train differently to maximize his performance in the 200 IM. He just needs to be able to swim free with good technique while breathing. Pretty simple. Simply having higher hips would at least put him 28 high/29 low coming home. Still not the same level as the typical world class 200 IMer but quite an improvement.

Yeah and that’s the thing, he doesn’t need to have the best last 50 in the field, he just needs to have a slightly above average one and he can break the WR. Nobody else out there with that kind of upside rn.

This is not really a fixable issue unless he commits to multiple years of aerobic training. He can focus on his technique and breathing all he wants for his 10 laps of training up and down the pool. When the fatigue sets in from 3 rounds of 2IM on that final 50 and you don’t have any aerobic base to rely on, you’re going to die and your technique is going to fall apart.

His training has gotten him 90% of the way there to being an individual medalist.

Maaaaaaybe. He’s got ~90 seconds worth of real fast swimming in him from his current approach, so like, does he NEED miles and miles of aerobic swimming to come up with that last 30 seconds where’s he’s not basically dead?

There’s gotta be a couple of ways to get there, probably makes sense to either change as few things as possible (baby steps!) or just completely overhaul and see what happens. I also wonder if there’s a way to boost that cardio but through like, rowing or something.

I mean it didn’t work at the Olympics, sure, but his Trials swims were plenty good. It’s v close to being there.

Little tweaks are probably the way to go right now versus a complete overhaul, but either could work.

That might as well do it, I just think the farther away you get from what he has been doing, the more likely it is to not work. And then it’s like, well, now what do ya do?

This is basically a DOE problem – ya change too many variables, you’re not gonna know where to go after the experiment. (Yeehaw, I still remembered an engineering thing!)

I respect the yeehaw.

Very fast last 50. That’s cool and fun to compare with the Olympic splits. In the end, however, it’s a 200 IM and the final time is what counts.
I was impressed with Teagan O’Dell’s time – just a half second behind Kozan and she’s younger. How does her time stack up against her age group peers?

O’Dell’s time is a NAG

She also broke Missy’s 200 IM NAG as a 12 yr old. As a 14 yr old she sits first in the country by about 4 seconds. Definitely one to watch over the next few years!

didn’t she also close the 4IM in like a 1:01 at trials prelims?
girl books her free

Aren’t there a few internationals on that 17-18 all time list? Pickrem? Omoto?

Surely the global top performance list can’t be so dominated by Americans?