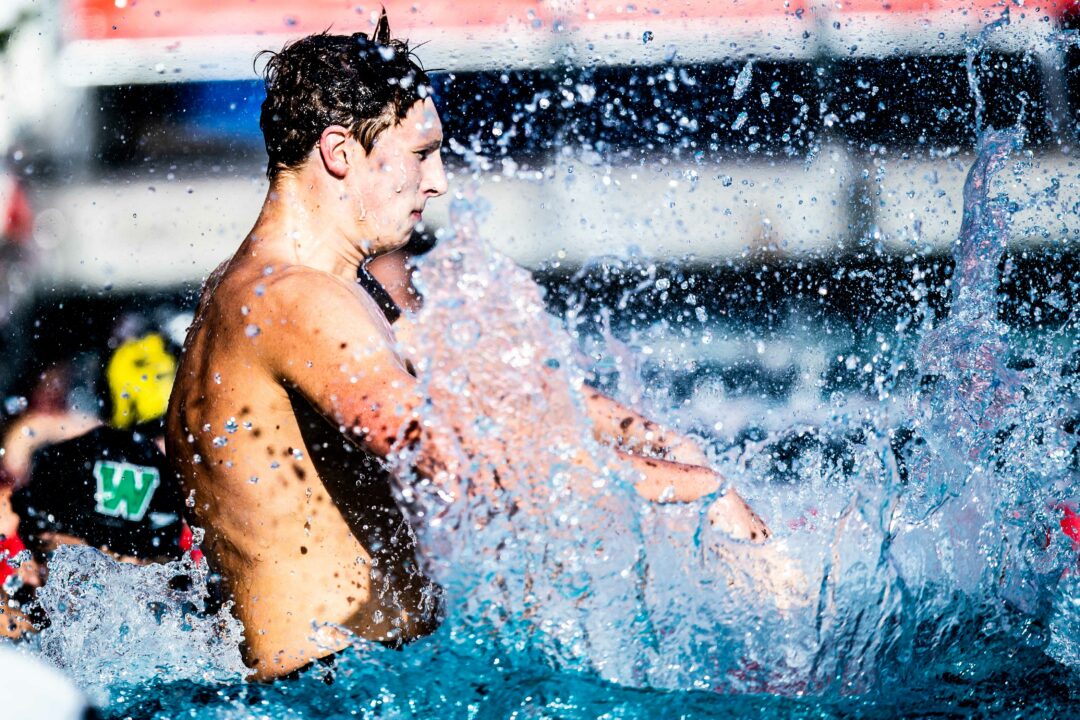 The final session of the 2021 Speedo Summer Championships is underway. Follow along here for event-by-event coverage! Current photo via Jack Spitser/Spitser Photography

The final prelims session of the Speedo Summer Championships will see the 200 IM and 50 free competed.

The final session of the 2021 Speedo Summer Championships is here. Tonight, things will start with the fastest heat of the women’s 1500 free, then it’s the 200 IMs, followed by the men’s 800 free, then the 50 freestyles. The session, and meet, will concluded with the 400 medley relay timed finals.

Teagan O’Dell, the Irvine Novaquatics 14-year-old who has been sensational this week, is racing a double tonight. O’Dell posted the top times this morning in both the women’s 200 IM and 50 free. O’Dell has already broken into the all-time top 10 rankings for 13-14 girls in 4 events this week, and she’ll be looking to add to that total tonight.

Justina Kozan is looking for her 4th title of the meet. Kozan swam the 2nd-fastest time of the morning in the women’s 200 IM, and will be racing in lane 5 tonight. Kozan has the fastest lifetime best in the field by far.

Trenton Julian is also chasing his 4th title of the meet. Julian is the top seed in the men’s 200 IM, where he’ll be trying to hold off Cal teammate Sean Grieshop. Also in the mix is Metroplex’s Zhier Fan, a 17-year-old who has been electric this week. Fan swam a personal best this morning, including a blistering breast split, so he’ll be one to watch.

Aurora Roghair swam her race perfectly, sitting behind Julia Arzave for the first 1000 meters, then making her move. Roghair finished in 16:41.50, marking a personal best by 8 seconds. She spent the majority of the race splitting high-33s on her 50s, then in the final 300 meters, she brought her pace down to 32s. Roghair negative split the race, swimming an 8:22.96 on the first 750, and coming home in 8:18.54.

Juli Arzave took the race out hard, building a big lead over the field on the first 3rd of the race. During the middle 500, Arzave more or less maintained her lead, but when Roghair made her move at the end, Arzave had nothing left to challenge her. She finished in 16:47.97, which was just a bit off her personal best of 16:45.09.

Jillian Cox took the race out conservatively, sitting in 6th and 5th for a alrge portion of the race. She systematically passed people through the back half, ultimately getting to the wall 3rd in a huge new lifetime best of 16:52.20. That marks Cox’ first time under 17:00 in the event. Cox won the women’s 400 and 800 free at this meet, both with personal bests. She also swam a best time in the 200 free, where she came in 2nd.

Justina Kozan‘s closing speed in the 200 IM is truly unbelievable. It looked like Teagan O’Dell had the race locked up with 50m to go, but Kozan exploded off the breast-to-free wall, and had made up half the gap between her and O’Dell seemingly within seconds. By the time they were halfway down the pool, Kozan had pulled up to O’Dell’s shoulders, and managed to accumulate almost a full body-length lead by the time she finished.

The swim was just off Kozan’s best of 2:11.55, which she swam 2 years ago. Although the swim wasn’t a personal best, it was Kozan’s best time as a 17-18 year-old swimmer. The swim has now elevated Kozan to #12 all-time in the 17-18 age group. Additionally, and hold on to your hats as you read this, Kozan’s freestyle split tonight was 29.75. That’s exactly 1 second faster than the fastest freestyle split in the Olympic final a couple weeks ago. Gold medalist Yui Ohashi of Japan had the fastest free split in that field, clocking a 30.75.

Teagan O’Dell was equally incredible, but on the backstroke leg. She split a sizzling 32.75, which was the fastest in the field by 2 seconds. At just 14-years-old, O’Dell backstroke split was only slower than 2 swimmers in the Tokyo Olympic final, Ohashi (32.50), and Silver medalist Alex Walsh (32.68).

Trenton Julian took control of this race and didn’t look back. The Cal Bear and Rose Bowl product jumped out a lead of over a second at the 50m mark, then grew that to a 2-second lead at the 100. He then turned at the 150m up 3.3 seconds over 2nd-place Sean Grieshop, and ended up winning the race by 3.98 seconds. Julian managed to clock the fastest split in the field on every stroke except breaststroke.

With the swim of 1:57.86, Julian dropped well over a second from his personal best. He also became the #5 American in the event this year, and rose to #21 in the world this year. Additionally, he would have finished 4th at the Olympic Trials with the time. Julian made the final in the 200 IM at Trials, but finished 8th.

Nate Germonprez brought down his prelims time by a considerable margin, and was just off his personal best of 2:02.50. Germonprez used his back half to get himself into 3rd coming home.

The race was David Johnston‘s from the start. The Texas Longhorn won his 3rd event of the meet, and did so in best time fashion yet again. His time of 7:57.94 chipped almost a second off his previous best of 7:58.73, which he swam at the Olympic Trials.

Coming in 2nd was Tsunami SwimTeam 17-year-old Alec Enyeart, who has dropped massive amounts of time this week. Enyeart dropped just shy of 30 seconds in the 1500 to open his meet on Tuesday, and dropped just over 7 seconds from his previous best in the 800 tonight.

Tonight’s final was significantly faster than this morning’s prelims. Denver Hilltoppers 18-year-old Anna Shaw got her hand on the wall first in a photo-finish, clocking a 25.84.The swim was just off her personal best of 25.70, which she swam in March of this year.

Amy Feddersen, 20, came in 2nd tonight, breaking 26 seconds, but also finishing just off her personal best of 25.88, which is from May of this year. Coming in 3rd was 15-year-old Foxjets swimmer Caroline Larsen. Larsen’s time of 25.98 marks her 2nd lifetime best of the day in the event, and her first time under 26 seconds. Larsen entered the meet with a personal best of 26.46 from June of this year.

Racing just 30 minutes after the conclusion of the women’s 200 IM, Teagan O’Dell finished 7th in the final. She swam a 26.16, chipping 0.01 seconds off her prelims time, but touching again just off her 26.08 personal best.

Cristian Quintero picked up his first individual title of the meet in the last individual race of the meet. Quintero had an excellent start, momentum from that start helped set him up nicely to finish strong. Quintero’s time of 22.73 was just a tick off his personal best of 22.56, which stands as the Venezuelan National Record.

University of Wisconsin’s Andrew Benson came in 2nd, touching in 22.85. That marks a personal best for Benson by 0.06 seconds.

Notably, Teagan O’Dell led the Irvine Novaquatics squad off in 1:01.38.

Cal’s A squad jumped out to an early lead and never let it go. Destin Lasco got the team out to a 54.88 start on backstroke, while Forrest Frazier provided a 1:03.02 breast split. Jarod Hatch threw down the hammer on the fly leg, splitting 52.51, and Dylan Hawk anchored in 49.70.

Rose Bowl closed on Cal during the fly leg, thanks to a blistering 51.25 fly split from Trenton Julian. The split is Julian’s fastest to date.

Sure hope so, seems like a cool dude. Rooting for him, Carson, Luca, and Magahey for 2024

So incredibly fast! What a backstroke!