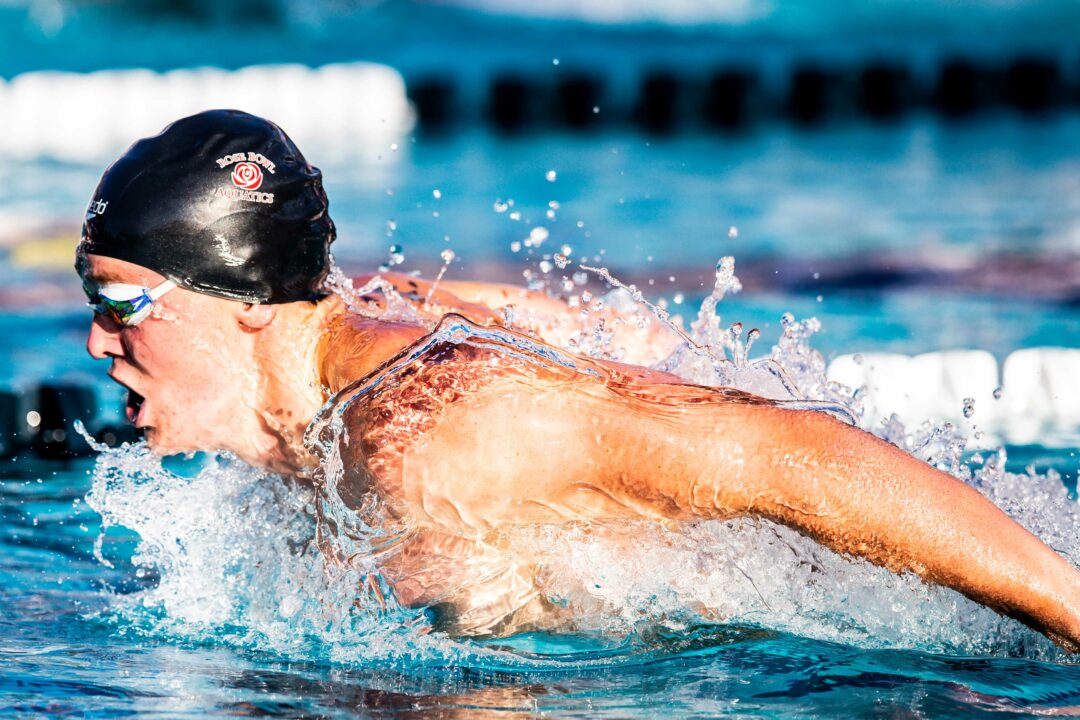 Trenton Julian capped off his 2021 Speedo Summer Championships with a monster swim in the 200 IM. Julian won the men’s 200 IM by a massive margin, clocking a 1:57.86. The swim marks a personal best for Julian by 1.35 seconds.

Julian’s previous best of 1:59.21 was swum in semifinals at the U.S. Olympic Trials in June. Here is a split comparison between Julian’s swim tonight, and his previous best from Trials:

Julian swam tonight’s race very differently than he swam the race in semifinals of the Olympic Trials. He was about half a second faster on the fly split, then buried his Trials backstroke split by 1.79 seconds. That means Julian was out 2.24 seconds faster on the first 100 than he was in June. The faster front half did, however, come at the expense of his back half, which was 0.81 seconds slower tonight than in June.

The swim makes Julian the #5 American in the LCM 200 IM this year, and raises him to #21 in the world this year. His time also would have finished 4th in finals of the Olympic Trials.

In addition to the 200 IM performance, Julian swam on Rose Bowl Aquatics’ 400 medley relay tonight. He provided a blistering 51.25 fly split for his relay, marking his fastest fly split to date.

Here is a summary of Julian’s swims this week:

Julian keeps on getting better and better. I reckon he is one breakout meet away from being a star on the US team

He seems to do better when he flies and dies

Geez Louise. He had a great meet. He’ll be fun to watch at NCAAs.

Liking his chances for 2024. He’ll continue to be hungry while some 2021 Olympians take some time off, I’m sure.

MA will not take some time off. He will cross the ocean to train with Philippe Lucas 7 days a week/20 km per day. The biggest training methods change in the history of the sport! The transition from USRPT will be violent. But MA is ready to make the efforts to never again feel the piano in the last 50.

No Way MA at Paris.. Carson i’s a lock in both im…anyway feeling good for USA as they surpassed China as Gold and total medal Count… Congrats USA… Hope to see you in Paris

MA will be trained by Tony Ervin, and he will be a half body length ahead of Dressel by 15 meters and break Cielo’s suited WR.

Honestly though, I think MA is more excited about sprinting and he will be focusing more on stroke 50s at worlds rather than 200IM. Excited to see what he can do with some time off and working on his dry lands next year.