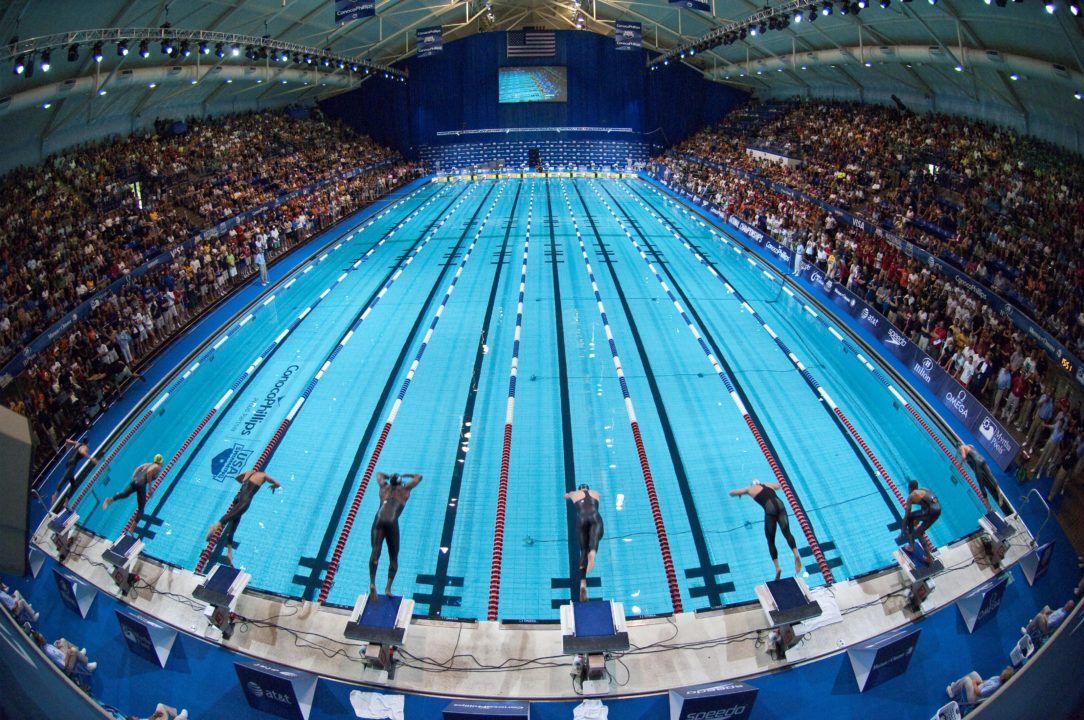 USA Swimming has confirmed that Mitch D'Arrigo will be in tonight's 200 Free A-Final, despite having represented Italy internationally. Current photo via IUPUI (photo courtesy of IUPUI & Counsilman Hunsaker)

USA Swimming has confirmed that Mitch D’Arrigo will be allowed to swim in the A-final of tonight’s 200 free.  D’Arrigo has represented Italy internationally for the past few years, but holds dual citizenship and will be transitioning his sporting nationality to the United States.  According to USA Swimming, he will be eligible to compete for the US for the World University Games, but not the FINA World Championships.

Eyebrows were raised when D’Arrigo was listed on the psych sheet for this meet, as foreign athletes are typically not allowed to compete.  According to the World Championships Trials meet info: “Foreign athletes (those who are ineligible to represent the USA in international competitions) will not be allowed to swim at this competition unless approved by the National Team Director.”

However, USA Swimming confirmed that both D’Arrigo and  Bryce Kananowicz were cleared to compete this week.

This morning, D’Arrigo placed 5th in the prelims of the 200 free with time of 1:47.52.  There was some expectation and supposition that D’Arrigo would not be allowed to swim in the A-final, and would be relegated to the B-final, as is typically the case when foreigners are allowed to swim at selection events.  The confirmation that he will be in the A-final means that Jonathan Roberts, an Olympic Trials finalist who finished 9th this morning, will remain in the B-final.

D’Arrigo in the A-final, but not eligible for World Championships, means that six of the seven other swimmers, including Caeleb Dressel, will most likely earn roster spots in either the individual 200 free or the 4×200 free relay.

Mitch has an American mother and an Italian father. He graduated from PK Yonge in Gainesville and has been here since his junior year of high school. His dual citizenship is nothing new. I think he should make a deal with Roberts and offer to swim the B final under the condition that if Roberts makes the WUGs team in the individual 200 by finishing 7th or 8th and Mitch finishes 9th overall (1st in the B final), that Roberts has to recuse his position on the WUGs team. The problem is that if Roberts makes the Worlds team, there’s no guarantee that the guys who do finish 7th or 8th will refuse the WUG team (assuming they don’t make… Read more »

In my opinion you need to declare for the USA and THEN wait a year to be eligible. So he needed to declare his intention to switch in June 2016. You can’t switch and then use the past year as part of the waiting period. Not fair to anyone if they allow him to do that.

I would file a protest if I was Roberts. They are allowing an ineligible swimmer into a championship heat? Would they allow this at trials. Hell no.

What i understand is : Usa will not be lacking any talent in this 200 free for a long time ……

All he needs to do tonight is show up and not false start in order to qualify for WUGS regardless of how anyone else does in the “b” or “c” final. Right? If I were in charge I’d figure out how to put Jonathan Roberts in lane 9 or 0.

B Final swimmers are still eligible for WUGs (individually and as a relay) – am I correct?

My interpretation of the rules is that if D’Arrigo places top six, then through the selection procedures the USA will only take five in this event. Though I imagine they may pull the 7th place finisher on the team if there is space like they did for Davis Tarwater in 2012.

The selection procedure use the term “Available Swimmer.” D’Arrigo is not an available swimmer for purposes of the World Championships, so I would assume, that, if D’Arrigo makes top 6, that the 7th place finisher will be considered the “sixth highest placing Available Swimmer” for purposes of selection. Now, whether or not my assumption is correct is anyone’s guess.

I believe Mitch D’Arrigo has primarily lived in the US since before college, so maybe cut him some slack? Making Team USA in the 4×200 is still really really hard – it’s not like he changed his citizenship to Lichtenstein.