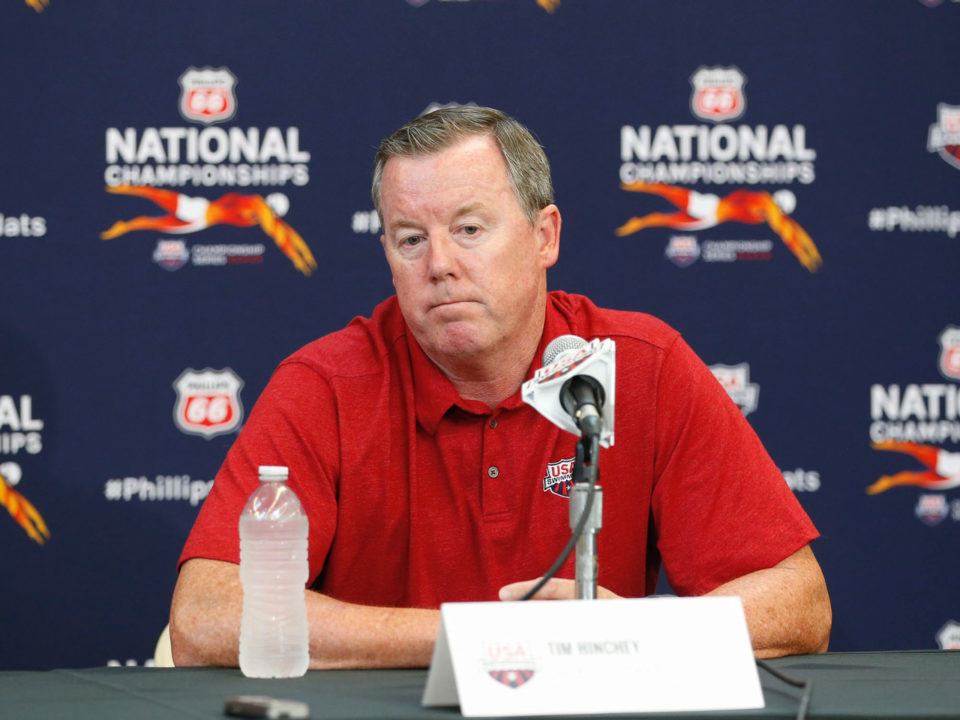 USA Swimming CEO Tim Hinchey fielded questions about the inappropriate text messages sent by coach Bob Bowman in 2011, saying that if a similar incident happened under Hinchey’s leadership, the new CEO wouldn’t appoint the coach to an Olympic coaching role.

“If this happened today with one of our coaches, I can’t see appointing him to an Olympic team,” Hinchey said in a press conference today.

Bowman, currently the coach of Arizona State University and well-known for coaching multiple Olympians including Michael Phelps, is accused of sending an inappropriate text message to a former swimmer in May of 2011. Caroline Burckle publicly accused Bowman this week alongside Sean Hutchison, the former national-level swim coach accused of grooming and sexually abusing swimmer Ariana Kukors when he was her coach.

Hinchey was grilled on the matter in a press conference today. He’s only been the CEO of USA Swimming for about a year, and made clear in his press conference that he would have handled the situation differently at the time, though he expressed no reservations about Bowman’s current ability to work with athletes.

“Certainly from a criticism perspective, I don’t think that’s how I would have handled the situation, quite frankly,” Hinchey said. “I think regardless of age, gender, athlete, non-athlete, no one deserves to have communication like that.

When asked how he would have handled a similar incident with an official working for his former employer, Major League Soccer’s Colorado Rapids, Hinchey suggested the conduct wouldn’t be tolerated. “I’d like to think that that’s someone that wouldn’t be working with the Rapids,” he said.

On the other hand, Hinchey said he didn’t have any reservations about Bowman continuing to coach athlete members of USA Swimming. When asked specifically about national team coaching roles, he was non-committal, deferring to National Team Managing Director Lindsay Mintenko.

“This instance, although we don’t condone it, we don’t like it… the circumstances from what I understand were that it was not [communication to] a swimmer at the time, it was [to] an adult,” Hinchey said. “I don’t like it, but from a coaching perspective, I think his resume speaks for itself.

“As far as speculating about the future, I’ll leave that with Lindsay Mintenko for now. Bob certainly doesn’t feel good about this, I can tell by his reaction. We make mistakes and you can’t turn back the clock.”

Saying he wants to do everything possible to set the new standard, yet he hasn’t talked to bowman about this yet?? This is a major news story, and he was obviously going to be asked about it at the national championships this week, so why are you not doing everything in your power to get to the bottom of this with bowman and show the public you are going to make a stand? Using the 7 years ago excuse seems like a cop out

Also, does anyone know how this affects the relationship with Allison Schmitt? She is close friends with Caroline Burckle and an outspoken advocate for social work and mental wellbeing; how can she show up to practice everyday and trust bowman?

Caroline Burkle still follows Bowman on twitter so I guess she has forgiven him. What is not stated is how Sean Hutchison plays into this. From the last paragraph it would seem Hinchey has talked to Bowman.

Plenty of people follow people they have issues with, so while she may have let it go by now, I’m not sure that counts as evidence.

I’m not denouncing the story, but it’s important to remeber these are allegations. I’m starting to wonder if we need a deeper investigation of these coachs. If this story is true, Bowman will be the most prominent of sadly a way to high number of coachs who have sexually mistreated their young athletes. Something needs to be done to protect our youth, the athlete coach bond, while it can be an amazing thing, is way to easily exploited by predators, and clearly we are not doing enough to save our children from this threat.

IM Fan – these are not allegations. The letter of reprimand has been presented to the media, Bowman has acknowledged their existence in a statement, as has Arizona State. USA Swimming has seen the exact texts. In this case, the existence of these texts, and the broad implication of them, are not allegations.

What exactly did he say? I am not condoning his behavior but it would be helpful to know what he said.

It would appear he contradicts himself in almost every aspect of his comments. First, he seems to indicate age, gender, status (athlete vs non-athlete), etc shouldn’t matter and then he circles back around and attempts to minimize the behavior using age and status as justification. Second, he states “I don’t think that’s how I would have handled the situation, quite frankly” and then goes on to delegate the decision-making process to someone that was very likely a key player in the initial handling of it. Throwing around phrases like “zero tolerance,” as he did at the press conference, and following it up with zero action and zero consequences, contradicting himself repeatedly, and worst of all passing the buck down the… Read more »