Heatly Doubles Up at Home in Edinburgh at British Diving Championships 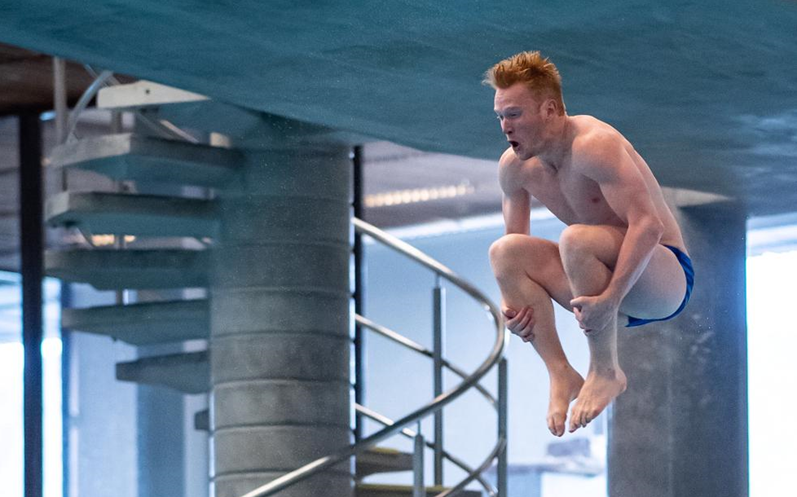 Springboard specialist James Heatly secured his second gold of the weekend, as he cruised to the top of the rankings in the Men’s 3m Springboard on day two of the British Diving Championships. Current photo via British Swimming

Springboard specialist James Heatly secured his second gold of the weekend, as he cruised to the top of the rankings in the Men’s 3m Springboard on day two of the British Diving Championships.

A dominant delivery of prelims diving in the morning session saw Heatly head into the final as the top-ranked athlete and after getting into his stride in the second round, he seized control of the medal decider.

The key dive that cemented the local lad the gold medal came in the fifth and penultimate round, a Reverse 3 ½ Somersaults Tuck (307C), which collected 80.50 points.

Yesterday saw James claim his first senior individual British title at his home pool in the Men’s 1m and in as many days he managed to double up his gold medal tally with a final score of 439.20.

Reflecting on the result, Heatly said:

“I’m really happy right now; yesterday I got my first individual British title and I was so pleased with that, so to get two this weekend, I’m over the moon.

“I was a bit nervous going into that one as it’s such a strong event so I’m really happy to come out on top today.

“I’m generally pretty happy with how all my dives went, everything was there or thereabouts. I know I can give a bit more on each of them, but it was a good score for me so knowing that there’s room to improve I’m looking forward to the future.

“All that I wanted to do this weekend was come out, do the competition and see where I was. I’ve done that so now we just have to wait and see if I get any international call ups this summer.”

Jamaica’s Yona Knight-Widsom posted the highest score of the final, 442.05 points bagged him the guest gold. In his debut senior season on the springboard, Leeds diver Dan Goodfellow posted a score 420.60 points for the silver and the bronze medal went to Jordan Houlden of the City of Sheffield Diving, his closing score 408.95.

Switching to the platform Lois Toulson successfully defended her British title in the Women’s 10m event. After her opening two dives the City of Leeds diver was sat in silver medal position but stepped it up a gear with her Armstand Back 2 Somersault 1 ½ Twists (6243D) in the third round to shift into the top spot.

Toulson managed to notch up a total of 319.40 points which eventually secured her the center podium spot and Edinburgh gold.

After the result was confirmed Toulson said:

“I’m really happy with my performance overall; I’ve done a lot of competitions this season so far so I’m a bit tired but I feel I managed to put in some good dives, especially when looking ahead to the World Champs.

“319 was my score today, it’s not my best but it’s not my worst either – I think a couple of my dives could’ve been a bit sharper. When we get back to Leeds it will be a case of working on those finishing touches ahead of the summer in Gwangju.”

The other Women’s 10m Platform medals were shared amongst Dive London’s Robyn Birch and Crystal Palace Diving’s Eden Cheng, with scores of 314.10 and 286.80 respectively.

The Women’s 3m Synchro event served up a surprise result as the duo from Dive London of Maria Papworth Burrel and Scarlett Mew Jensen snatched victory with a margin of just over three points, their final score 283.98.

Silver went to Grace Reid and Kat Torrance whilst bronze was secured by Plymouth pair Kayleigh Sinclair and Summer Radcliffe.

Dixon and Williams lead throughout the rounds and completed their lists with a point’s total of 409.83, a new personal best score for them.

The partnership of Lucas Thomson (Edinburgh Diving) and Ben Cutmore (Dive London) sealed silver with 385.63 points, whilst Robbie Lee (Southampton Diving) and Euan McCabe (Plymouth Diving) settled for bronze with a score of 330.78.

Click here to view and download detailed results of all the action from the British Diving Championships 2019.

Tickets are still available and can be bought on the door at the Royal Commonwealth Pool, plus more information about the event is available here.