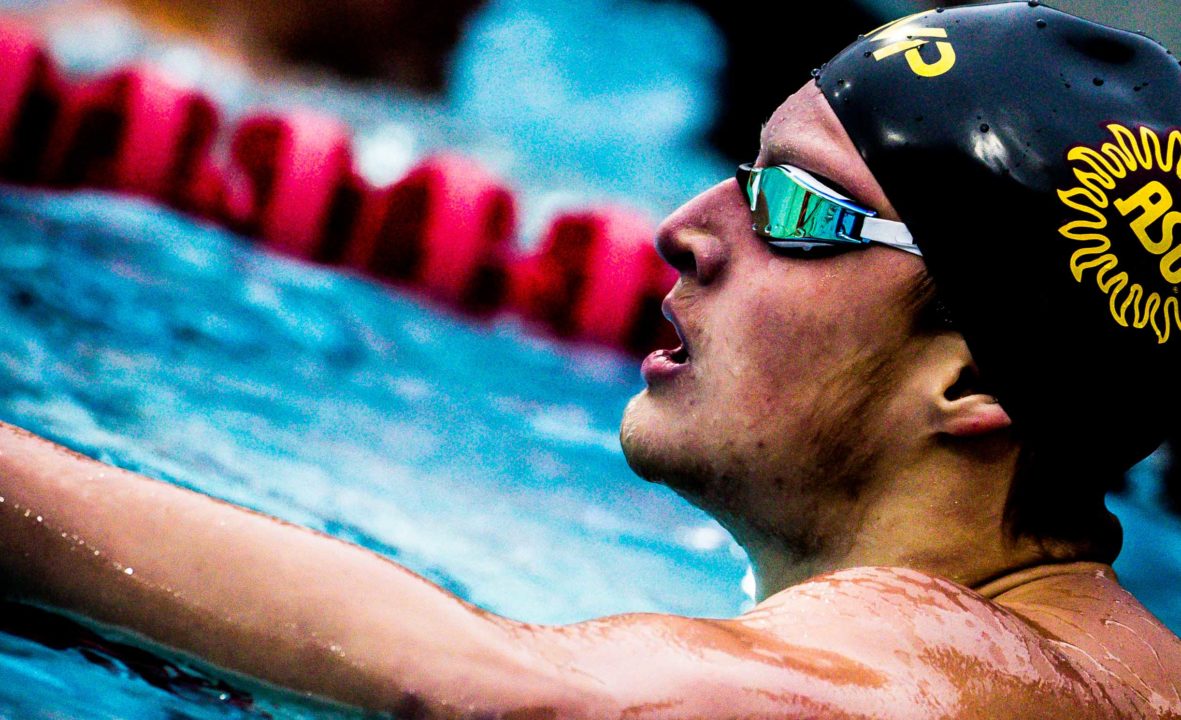 In order to accommodate every swimmer on their team, the top group at Asphalt Green trains Saturday-Thursday, with Fridays off.

If you don’t like the career you’re in, you might want to work in the swimming community and be a part of our swimming family! Go here to see 3,546 Swim Jobs

Arizona State is well represented at the spring Western Sectionals meet in Phoenix. ASU, which has red-shirted the 2020-2021 NCAA season, is using Sectionals as a key meet for their swimmers. The meet does feature a unique scheduling wrinkle as preliminary heats are being held at three different venues across the greater Phoenix area while finals will be at one location.

Arizona State senior Camryn Curry took an early lead of the women’s race as she was the first swimmer to hit the 50 turn at 23.40. Right behind her was Cal alumna Amy Bilquist at 23.46. Bilquist had a stronger second 50 to finish in first place at 48.82, well off her best of 47.02 from the 2019 Pac 12 Championship meet. Curry was second in 49.19 and within two-tenths of her best time of 49.03. Ashley Strouse of the Scottsdale Aquatic Club came in third at 49.49. That was Strouse’s second best time of her career, bested by a 49.24 she swam three years ago.

The men’s final could have been mistaken as an Arizona State practice as all lanes were occupied by Sun Devils. Grant House led the way from start, taking his first 50 out in 20.44 seconds. House had the only sub-22 second 50 split and finished in a time of 42.42. According to the USA Swimming database, this is House’s best swim as he dropped .50 from the 42.92 he swam a year ago. Cody Bybee came in second in 43.13 and Carter Swift was right behind in third in 43.19.

Jacoby, who is headed to Texas in the fall of 2022, now has the third fastest time this season in the 17-18 age group. Her time from last night would have put her in the consolation final at last night’s NCAA Division I women’s meet.

A pair of Sun Devils led the way to a 1-2 finish. Lindsay Looney got out to an early lead as she led at the first 50 at 26.14. Looney would maintain her speed and pull away over the second half of the race to finish with a new meet record and personal best time of 1:55.27. Her teammate Jade Foelske was second in 1:56.76 and Elizabeth Cook of Tualatin Hills was third in 1:59.05.

The men’s race was similar to the women as Arizona State had two swimmers finish first and second. Alexander Colson would lead from start to finish, taking first with a new personal best time of 1:42.33. Colson dropped over a second from his previous best of 1:43.39 from last year’s Pac 12 meet. Colson’s teammate William Bresette finished second in 1:45.20. Bresette’s best time coming into the meet was a 1:49.42 from over four years ago. He went 1:46.15 in prelims before dropping almost another second in finals. Daniel Matheson of Scottsdale was third with a personal best of 1:45.59.

Kennedy Noble of the YMCA Westside Silver Fins used the fastest backstroke split of the field to lead at the halfway point. Noble would extend her lead over the breaststroke and freestyle legs to be the only swimmer under 2:00 with a time of 1:57.53. Mia Rankin of the Phoenix Swim Club had the fastest freestyle split (27.86) to move ahead and finish second in 2:00.21. That was a best time for Rankin who’s previous best of 2:02.01 came this past November. Former Sun Devil Chloe Isleta, swimming with the YMCA Westside Silver Fins placed third in 2:00.28.

Continuing a theme of the night’s events, ASU swimmers would again finish 1-2 in an event. House would win his second event of the night and set a new meet record of 1:43.16. House had the fastest fly, back, and breast splits of the field and was just off his best of 1:42.83 from the 2019 Pac 12 meet. Julian Hill of ASU placed second 1:45.58. According to the USA Swimming database, Hill’s previous best was a 1:49.03 from 2018. Matheson would pick up his second third place finish of the meet with a best time of 1:48.04.

The night would close with the 800 free relay. The race on the women’s side was between the Phoenix Swim Club and Tualatin Hills. Rankin got PSC out to the early lead with a 1:49.43 lead-off as they led Tualatin Hills by over three seconds. Tualatin Hills would use a 1:49.80 second leg from Lily Gardner to cut PSC’s lead to 0.99 at the halfway point. Tualatin Hills would continue to close the gap on the third leg as PSC’s lead shrunk to .58 as the last swimmers would dive into the water. Both PSC and Tualatin Hills had sub-1:49 splits on the anchor leg as PSC would hold onto win. Rankin, Danielle Gleason (1:51.93), Kelly Scott (1:52.06), and Samantha Crew (1:48.69) took the win in 7:22.11. Tualatin Hills was second in 7:22.56 and Scottsdale was third in 7:25.86. Scottsdale’s Strouse had the fastest split of the field of 1:47.90.

ASU swimmers putting up times that would have qualified for NCAA’s – that’s good, too bad they chose to redshirt this year. And good for local swimmers to see what the next level looks like so they can aspire to get there. Always good to race against people who are faster

Too bad the ASU swimmers are taking away finals swims from kids hoping to get to college swimming. They should not be in this meet.

Sectionals never has been a designated 18 & Under meet. I don’t know why there’s an expectation that it be one, but it’s never been intended as such. It’s a high-level prelims/finals meet for swimmers of all ages.

Just call it what it is: you’re mad because you wanted your kid to swim finals, and your focus is 100% on your kid. Don’t degrade the top swimmers for the benefit of the bottom swimmers.

Boohoo. It’s an open age group meet. Get a grip.

Just to clarify…………there are many college swimmers and post grads competing in this meet, not just ASU swimmers. Also to note that of the four final heats contested at night, half of them are for 18 & under athletes. At this time of the year, that would preclude most college swimmers from those heats.

Bowman & ASU might win the age group meet, but they wouldn’t make top-20 at NCAAs…

LOL. Dude. Take away the 45 diving points and your beloved IU and Ray Loose only had two swim scorers and would’ve missed the top 20. But keep bashing Bowman dude.

Arizona State did take away diving…

Oh is that not what you meant? Sorry I misunderstood.

ASU men’s is just destroying these age group kids, matheson is the only male breaking up there top 3 finishes

Wonder if there is another meet they could be going to that would be more appropriate?