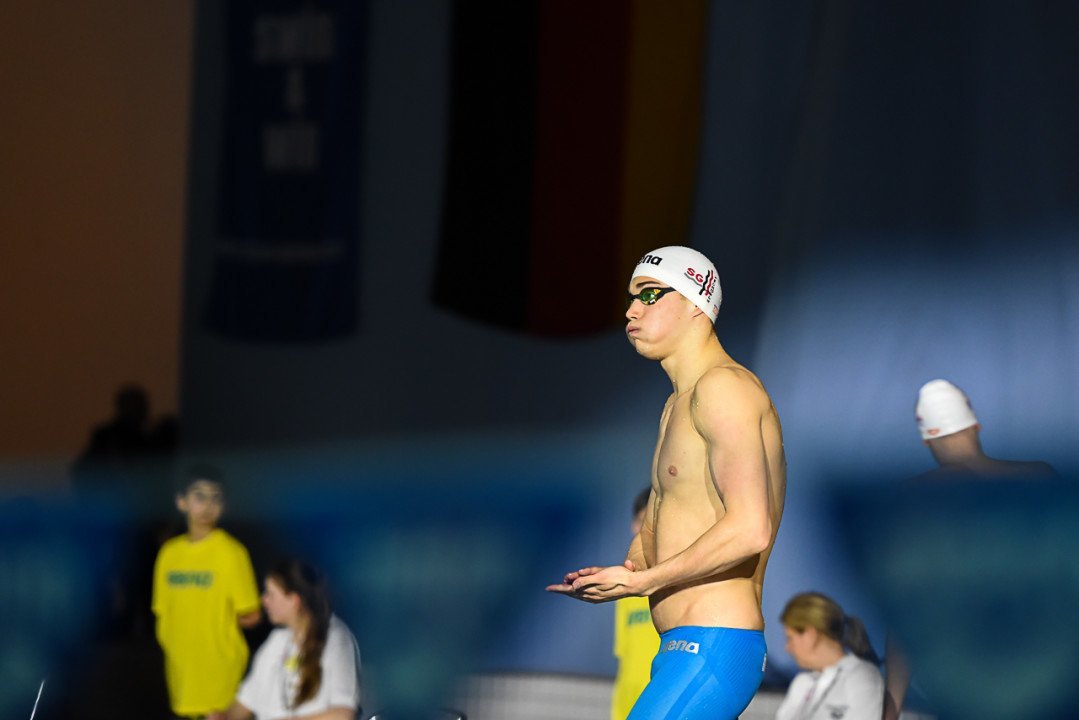 Ole Braunschweig (above) and Marek Ulrich are less than .20 off the Olympic qualifying cut in the 100 back. Ulrich, who had retired in 2018, is within .05. Archive photo via Mike Lewis/Ola Vista Photography

Lukas Matzerath highlighted the 100 breast in prelims, posting a lifetime best of 59.63, getting under the Olympic qualifying cut and touching the wall in 1st.  University of Texas’ Anna Elendt was only about half-a-second off the qualifying cut in the 100 breast as she earned the top spot in finals with a time of 1:07.65.

The 100 fly is actually missing one of Germany’s fastest women during this qualification period, Angelina Köhler, who had to withdraw after reportedly being infected by the coronavirus. Her best time during the period is set at 58.63 and if no one is able to beat that time she will be the first in line for the 4×100 medley relay spot. In prelims, the closest swimmer was Lisa Höpink (59.39).

Marek Ulrich, who retired in 2018 and made a comeback in 2019, nearly cracked the Olympic qualifying time in the 100 back this morning with a time of 53.75.  He should have a close race with 2nd seed Ole Braunschweig who was only .13 behind him in prelims.

Lukas Märtens of SG Magdeburg was the first to crack an Olympic qualifying time, undercutting it by one-third 0f a second. Going into this meet his lifetime best was 1:47.24 from December. Close behind was Heidtmann, narrowly missing the cut. Both swimmers were the only ones to break 53 seconds on the first 100 meters in the A final. In 3rd place was Poul Zellmann from SG Essen, just over a second behind Märtens.

18-year-old Isabel Gose battled it out with Olympic veteran Annika Bruhn in this event, with both swimmers ultimately beating the German Olympic qualifying standard of 1:57.20. Gose also broke a 25-year-old age group record that was set by Franziska van Almsick in 1996 at 1:58.14. Almsick won silver at the 1996 Olympic Games in this event. Leonie Kullmann took 3rd place about half-a-second behind Bruhn,

The mile final was a 3-woman heat today with Olympic veteran Sarah Köhler taking 1st place well under the Olympic qualifying standard of 16:16.00. Notably, Köhler has already secured a spot on Germany’s Olympic roster in this event as well as the 800 free. Jeannette Spiwoks and Celine Rieder had an incredibly tight race, finishing about a second-and-a-half apart. Rieder has already cracked the German Olympic qualifying standard during the qualification period.

Schwingenschlögl and Matzerath both undercut the Olympic qualifying standard of 59.80 substantially.  Schwingenschlögl created a lead from the very beginning, splitting a 27.68 at the 50-meter mark about .20 ahead of the field. At the halfway point, Matzerath was neck-and-neck with Melvin Imoudou who ended up finishing in 4th (1:00.89). 200 breaststroke National Record holder Marco Koch took 3rd place, missing the cut by about half-a-second.

University of Texas’ Anna Elendt, who swims for SG Frankfurt, claimed 1st over National Record holder Jessica Steiger by .46. But, Elendt narrowly missed the German Olympic qualifying standard of 1:07.00. Steiger was actually well ahead of Elendt at the 50-meter mark, turning at 31.48 compared to Elendt’s 31.88, but the college freshman brought it home on the last half to secure the win. In 3rd place was Bente Fischer of Neckarsulmer Sport-Union with a time of 1:08.36.

SG Essen’s Marius Kusch bested former 200 fly record holder Ramon Klenz by a full second in the finals race, touching the wall .05 under the German Olympic qualifying standard. Kusch already secured a spot on Germany’s Olympic roster in this event. 2001-born Kammann, the youngest in the finals heat, claimed 3rd place after a tight race with Klenz. Kammann picked up the pace and was able to wear down Klenz’s lead after the first half of the race.

Höpink posted a lifetime best 100 fly time, crushing her previous best time from the Eindhoven qualification meet earlier this month by .06. She finished the race with a commanding 2-second lead over the field. Behind her, Schmidtke and Felsner battled it out for 2nd place. But in the end, Schmidtke’s .64 lead over Felsner at the halfway point was insurmountable even though she got incredibly close. None of the swimmers bested the Olympic qualifying standard of 57.90, though.

Braunschweig took the win in the 100 back final, out touching Ulrich by .12 and besting his own prelims time by .01. Again, none of the swimmers were able to catch the Olympic qualifying standard of 53.70. Ulrich was the closest during prelims where he clocked a 53.75 to win the heat, and he added slightly to that time in finals. Not far behind, 2016 Olympian Christian Diener, who was right with Braunschweig at the 50-meter mark, claimed 3rd. This was a faster time for Diener, too, who posted a 54.49 during prelims.

Sisters Laura and Lena Riedemann dominated the 100 backstroke final, with the elder Riedemann claiming 1st with a solid 2 second lead over the field. The time to beat here, the Olympic qualifying cut, was 1:00.00 and Laura Riedemann undercut that time by .15. Notably, she already has a spot on the German Olympic roster in this event. She stayed right on her lifetime best of 59.82 from the 2019 World Championships. Sonnele Öztürk snagged 3rd, place dropping one-third of a second from prelims but remaining about .4 off her lifetime best.

Florian Wellbrock raced only himself and the clock in this finals heat. With no competitors, Wellbrock came within about 5 seconds of his lifetime best from 2019. His 1500 free victory at the 2019 World Championships has already secured him a spot on Germany’s Olympic roster in the 1500 free, alongside his spot in the 800 free.

THREE times .17s (exactly) slower than the qualification time in one session…
So close!

They all will still go for the medley relays, so not a sad day for them. I feel more for Ulrich who probably won’t be allowed to go despite having the FINA standard. If he would have replicated his heat time, he would have qualified.

Overall no really disappointing swims in my opinion, maybe except for Zellmann in men’s 200 free and Herkle in women’s 100 breast (her time doesn’t indicate that she can improve her 200 breast PB by half a second and get under the standard).

and what a time! The US would love that kind of swim right now.