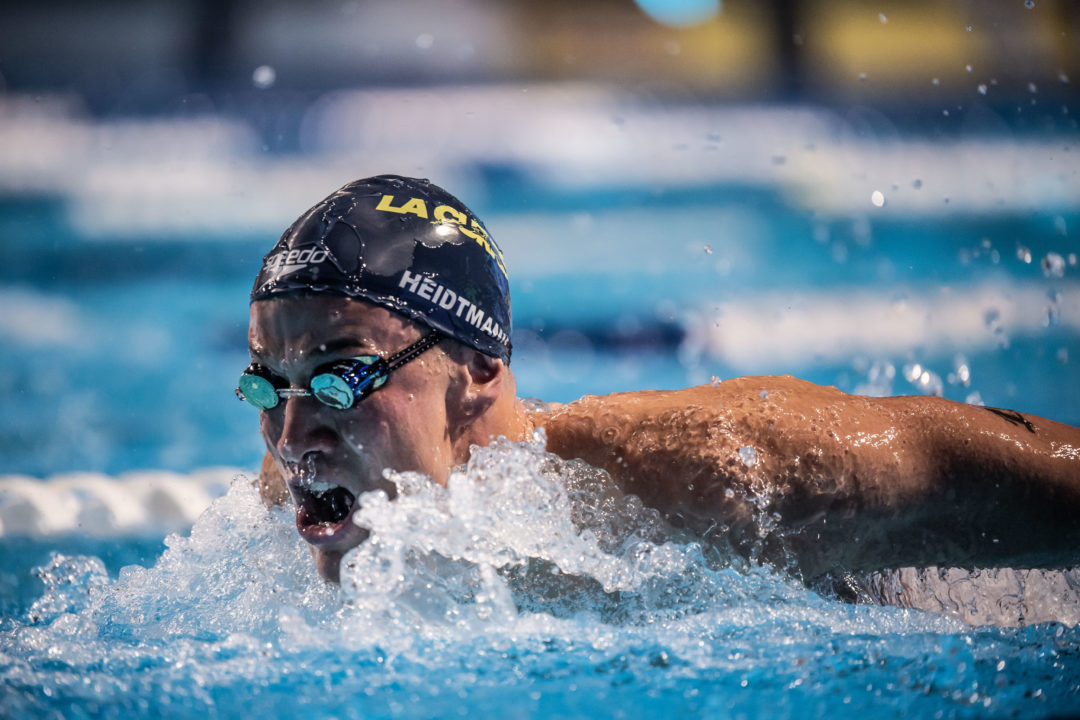 Jacob Heidtmann is entered in the 200 IM, 400 IM, 100 free and 200 free this week in Berlin at the last German Olympic qualifier. Current photo via Mike Lewis/Ola Vista Photography

The Olympic qualifying meet this week in Berlin will be the last chance for German swimmers to earn a spot on the Olympic team for Tokyo. The official trial period is April 1-18, and two meets have already run, while a fourth meet, initially scheduled for April 17-18 in Dortmund, has been canceled due to the pandemic.

A big event to watch will be the women’s 200 free, where the top nine swimmers are entered under two minutes, led by veteran Annika Bruhn (1:57.37). After breaking out with a national record in the 200 fly earlier in April, David Thomasberger is entered in the 100 fly and 100 free, while Marius Kusch and former 200 fly record-holder Ramon Klenz are on the start lists, too. Kusch, already on the team in the 100 fly, is entered in that event and the 50/100 free, while Klenz is in both fly events and the 200 IM.

Below, view the Olympic roster that was solidified before the current three-meet qualifying period. The second list is swimmers who have been under the Olympic cut at one of the last two trial meets and are in the running for Olympic spots.

Also surprising that none out of Mühlleitner/Märtens/Schwarz even tried to qualify for the 800 free, which probably means that only Wellbrock will swim it. Hard to imagine that Märtens wouldn’t have been able to comfortably qualify after going 3:45.2 in the 400 free and 14:49 in… Read more »

Really sad for them, i hope that they will get another chance. There will be a spot open in the 800 free, so they should allow Schwarz to qualify later on. With Köhler it is more tricky, but i think they should give her the chance to qualify by hitting the standard (if she swims faster than Höpink, but doesn’t get the standard, i would not nominate her for the medley relay).