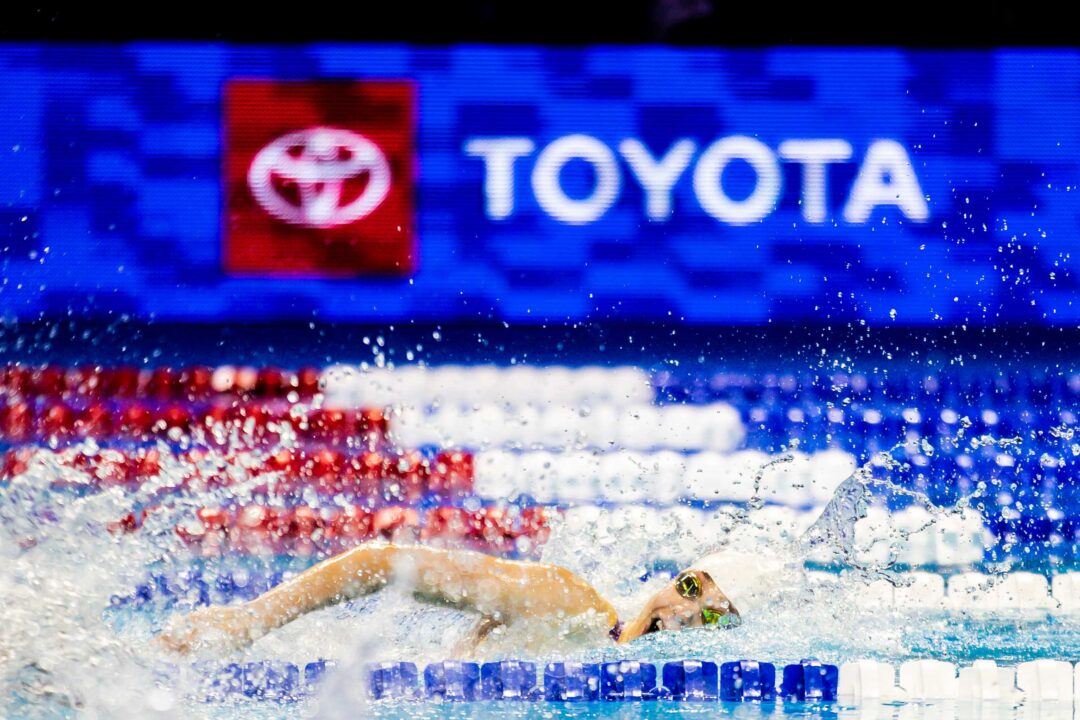 The Virginia High School League Class 6 (largest schools) took place this past weekend at the Jeff Rouse and Sport Center in Stafford, VA. There may not have been as many fireworks as last year, when national records went down, but there was still plenty of fast swimming as the Battlefield girls and Patriot boys captured state titles.

The Battlefield girls defeated defending champions Yorktown by two points after losing 236-209 in 2021.

Battlefield got the finals sessions off to a strong start by swimming the fastest time in Virginia public school history in the 200 medley relay. Tennessee commit Camille Spink led off in 24.54, the fastest in the field by almost a second and a half, and Emma Hannam (29.34), Sophia Heilman (24.87) and Jamie Cornwell (22.73) combined to touch in 1:41.48, knocking over a second off of the previous record.

Spink help power Battlefield to victory by sweeping the sprint freestyles. She won the 50 free in 22.31, then came back to win the 100 free with a time of 48.13. That 100 free time is just shy of Torri Huske’s Class 6 and overall state record of 48.04, which she set leading off Yorktown’s 400 free relay victory. Spink won this event in 48.93 last year, bringing the state record below 49 for the first time before Huske broke it later in the session. The junior won the 100 and 200 free at this meet in 2020 as a freshman, then the 50 and 100 free last year, so she’s now 6-6 for individual events at states.

It wasn’t a one-girl show, though, as Battlefield put at least swimmer into every A-final. That depth was especially crucial after Battlefield DQ’d their 400 free in prelims.

The defending champions Yorktown came close to repeating, but ultimately finished just two points behind Battlefield. They didn’t win any individual events, although they did win the 200 free relay, defeating Battlefield 1:35.02 to 1:35.82 despite a 22.06 anchor leg by Spink, and the 400 free relay, where they beat Robinson, 3:28.62 to 3:29.11.

NC State commit Katherine Helms helped South County to a top ten finish with two wins. She won rocked the 200 free, defending her title and winning by seconds, with a time of 1:46.45. She later won the 500 free with a 4:48.76.

It was a fairly similar story on the mens’s side, as Patriot won the medley relay and had a swimmer double, although they took an additional relay en route to winning by a much wider margin of victory than the Battlefield girls.

The Patriot Pioneers got off to a strong start early on, taking the 200 medley relay in 1:32.08 and winning by over a second thanks to a 21.38 fly split by Senior Landon Gentry.

Yorktown sophomore Nolan Dunkel successfully defended his title in the 100 back with a 48.81. He also took 3rd in the 100 fly behind Gentry and Graham with a time of 48.84.

DiNunzio was another swimmer who won an event for the second time, taking the 500 free in 4:24.64. Last year DiNunzio also won the 200 IM, helping Ocean Lakes to the state title, but this year he elected to forgo that in favor of the 200 free.

Woodson’s Aiken Do won the 50 free in 20.44, shaving two-tenths of a second off of the time he posted last year while taking second to Anthony Grimm. Last year, Do also won the 100 free, but like DiNunzio, he switched up his events for this year.