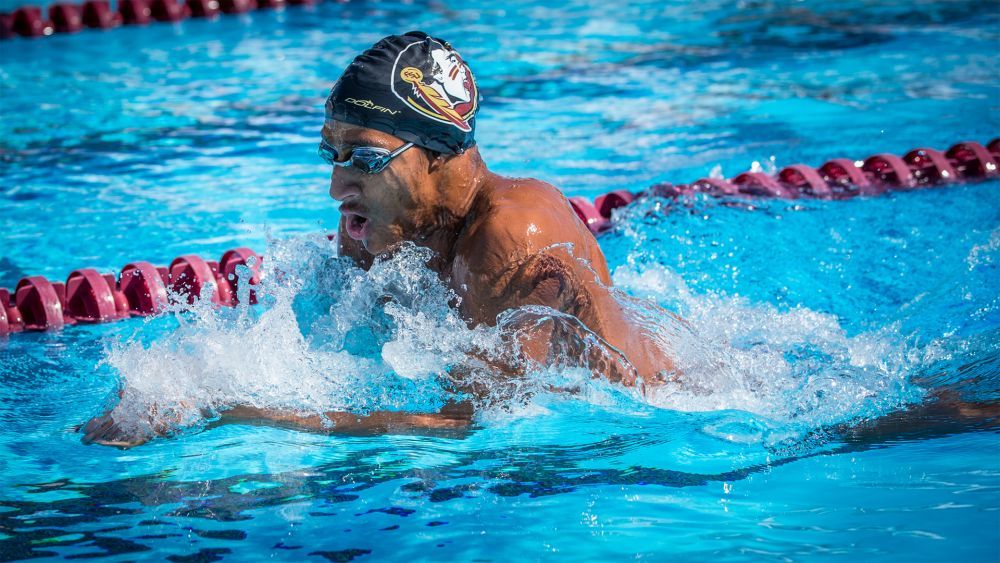 Izaak Bastian was one of three double winners for the Seminoles; he swept the breaststrokes, going 54.56 in the 100 and 2:00.13 in the 200 breast. Archive photo via Florida State Athletics

In their first home dual meet of the season, the Auburn Tigers split with Florida State, winning over the women’s team and falling to the Seminole men. On the men’s side, it was Florida State’s first time beating Auburn in program history.

The meet comes just 4 days after the University of Alabama canceled a meet with Auburn, citing an outbreak of COVID-19 within the Auburn program. Both teams were missing a few key contributors, but the Auburn men were missing an especially-large chunk of big names.

FSU’s Samantha Vear nabbed a win in both diving events, though Auburn was hot out of the first break, taking four straight wins. First was freshman Emma Steckiel in the 100 free (50.54), then freshman Kensley Merritt in the 200 back (1:59.94), then Cummings in the 200 breast and Hetzer in the 500 free.

The most impressive swim for FSU was freshman Jenny Halden in the 100 fly. Clocking a 52.66, she cleared the rest of the field by over two seconds, nearly cracking 24 seconds on the first 50. It’s her first season in yards (she’s Norwegian), but it’s the first sub-53 performance she’s done in a dual meet, and it slices a hundredth off of her old PR of 52.67 from the Georgia Invite in the fall.

It was a historic day for the FSU men’s program, as they snapped an 18-meet losing streak spanning to the two teams’ first dual meet in 1975.

Auburn freshman Mikkel Gadgaard, a Danish national, was one of the bright spots for the Tigers. Gadgaard took the 200 free in a big win (1:36.63), coming about a second off a lifetime best from the Auburn Invite (where he was suited and presumably a bit rested). He was also second in the 100 free (44.80) and 400 IM (3:53.65) in a tough triple, falling to Vance in the IM by just five hundredths.

Joshua Davidson nabbed victories on both boards for the Seminoles, while the other wins for Auburn were Michael Bonson in the 1000 free (9:15.65) and their 400 free relay (3:02.12). FSU DQ’d their 400 free relay, but had enough points by the end of the meet that it didn’t affect the ultimate outcome.

I keep saying that David Marsh is the favorite son of AU. He could turn the program around as quick as a squashed stink bug gets stinky! Coach Marsh is brilliant, crafty, innovative, loyal, insightful and compassionate. He is a proven winner who could not only lead AU back to glory BUT also shake up the faltering SEC. I say bring him back no matter the cost. AU alumni should band together, fund coaching endowment which will compensate him at $500K annually PLUS swim camps and swim wear contracts. Give him a housing allowance and turn that sucker lose on the swimming world. Why not???

Who is Corredor going to be swimming for next week?

Lol Gary probably fuming over that loss. Hopefully no transfers after this.

There hasn’t been a single person transfer in the last 2 seasons. There have only been people who have quit, yet have not joined another program. it makes you think… did they leave the team because of coaching issues or because they didn’t want to put the work in that being a collegiate swimmer requires?

Not a value judgement – but your first sentence is factually incorrect.

Looks like Auburn was okay swimming and losing against FSU with all their absences but not Alabama.

Even after repeated readings and reminding myself what the author meant, I can still barely understand that sentence as written. It’s been a long week, I guess.

It’s Wednesday, Becky. Almost there though! 🙂

I’d give the FSU men some credit here… While Auburn was clearly missing more guys than FSU, the names FSU were missing were pretty big ones. Plus the score wasn’t particularly close as it was.

I think this would have been a really close meet on the men’s side had both teams had all their swimmers. Maybe SwimSwam can do a COVID handicap for meets (jkjk)

Yeah the FSU men’s team has improved a lot over the last few years. The program is for sure heading in the right direction

I’d say FSU still wins the meet even with all of Auburn’s swimmers there. Especially if you factor in the DQ’d relay. Now, add FSU’s missing swimmers and it’s not close.

You may or may not be right about “if both teams had full rosters,” because Varjasi is a pretty big piece to be missing, but…I don’t think you get to take credit for the DQ’ed relay as well. That’s part of the competition, legal relay exchanges are a skill of swimming, not a circumstance of a pandemic.

It’s time for my good friend, David Marsh, to put the band back together and move back to “The Plains”. David, you need Auburn and, more importantly, Auburn desperately needs you!

You could not possibly be supporting another college…

No. IU all the way. But I like the coaches that took care of and did a good job with the kids I coached as age groupers or high school and David is one of those coaches. He was simply amazing at Auburn. I hope people never forget that.

Fair enough. And he did. That was quite the era

It will not happen. He wasn’t given much choice in leaving the first time.