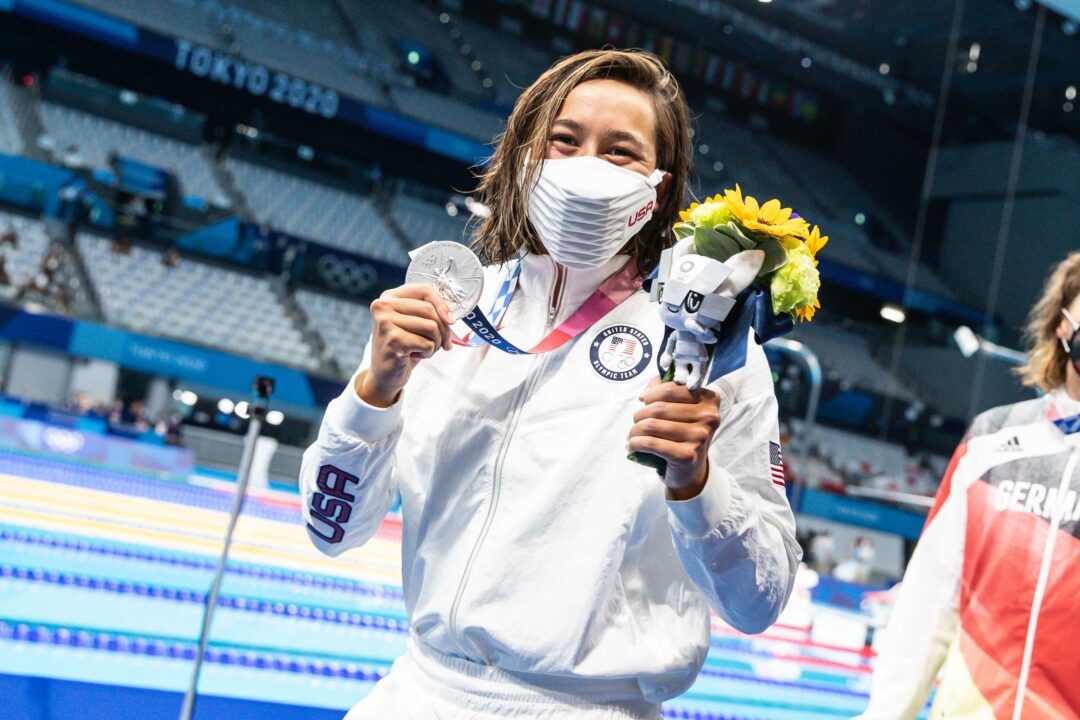 Since winning an Olympic silver medal in the 1500 freestyle, American Erica Sullivan has experienced rising popularity outside of the swimming community. Current photo via Jack Spitser/Spitser Photography

To swimming fans, Erica Sullivan is a very familiar name, as Sullivan has been on the scene since the 2016 Olympic Trials meet where she placed 12th overall in the 800 freestyle.

However, since winning an Olympic silver medal in the 1500 freestyle in Tokyo, Sullivan has quickly become a household name for more than just her swimming, becoming the first openly gay US swimmer to win an Olympic medal. Her feat has become a pinnacle of the Olympics within the media, including feature articles in the Washington Post, The New York Times, and other prominent media outlets.

Her presence even grabbed the attention of BuzzFeed and Tumblr, with BuzzFeed calling her the “new lesbian supreme.”

Sullivan first grabbed public attention during her post-race interview, where she spoke with the media in fluent-Japanese, her mother’s native language. She then proclaimed herself the “epitome of the American person,” explaining to reporters, “I’m multicultural. I’m queer. I’m a lot of minorities. That’s what America is. To me, America is not about being a majority. It’s about having your own start. The American Dream is coming to a country to establish what you want to do with your life.”

That response, in particular, earned praise from the LGBTQ+ community, with her Instagram and Twitter accounts blowing up. Although Sullivan’s Twitter fanatics have long been known within the swimming community (including many features on the TopTen Tweets), people also began to pick up on her quirky sense of humor, getting people to refer to her as “the queen of stan Twitter.”

“Stan Twitter” specifically, is a side of Twitter where fans post content relating to their favorite celebrities, shows, or movies. Sullivan has been noted for her frequent references to the show “The Wilds”, along with several other celebrities.

Recently, Sullivan has also grabbed the attention of global celebrities as well, gaining followers such as Camilla Cabello, Sarah Streicher, and Jill Gutowitz.

Sullivan says that she’s extremely grateful for all of the support she’s received over the past week. “It’s amazing, the coolest people follow me on insta now,” Sullivan explained, “Camila (Cabello), the whole wilds cast, Katie Couric, Shannon Beveridge (YouTube). It’s been insane. I literally now have fans for being other people’s fan. And it’s strange that it suddenly happened bc I’ve always had top tier tweets if I do say so myself but like no one would read them. And now I’m getting praised for it. It’s insane but I’m so so so so eternally grateful.”

It’s hard to not like her. She’s crazy good in the water. She’s so funny. And I also like her straight talk. She says what she wants. It’s so refreshing in the very refined world of sport where too often we hear robotic and conventional words.

She’s such an adorable swimming role model. I hope she makes others on the national team feel more comfortable coming out.

she’s so fun on tumblr! username is rics-fandom and you can send her anonymous questions that she’s been really great about answering

Erica is a good kid, err young lady. (I hope that terminology is correct. I just don’t know). I wish her the best.

If only we could be back to the times when anti-social media and smartphones didn’t exist.
The youth of today doesn’t realize how cooler and funnier it was without these addictive and dangerous tools.
We played outside. We didn’t spend our life in front of screens and we didn’t have our hands glued to a smartphone 8 hours a day.
I’m so glad I went to high school in the late 90s while it was still the real life.
Congrats to Erica Sullivan on your amazing year. In Paris your goal will be the gold.

Katie Ledecky will repeat in the women’s 1500 meter freestyle and Erica Sullivan better watch her back for Katie Grimes (8:17.05, 15:52.12). That’s fifteen year old Katie Grimes from the Sandpipers of Nevada Swim Club.

Well if Grimes passes Sullivan she will probably blow by Ledecky also. I don’t know if we will see ledecky sub 8:15/15:40 again. She went 3:57 which was fast but her 800/1500 kinda sucked in comparison. Too much muscle now I guess

Bro you sound like you grow crabapples to throw at teenagers

wow i expected you to be way older than someone who went to HS in the late 90s.

You’d be an awful coach lol

With stan twitter in her arsenal, now she’s truly unstoppable.