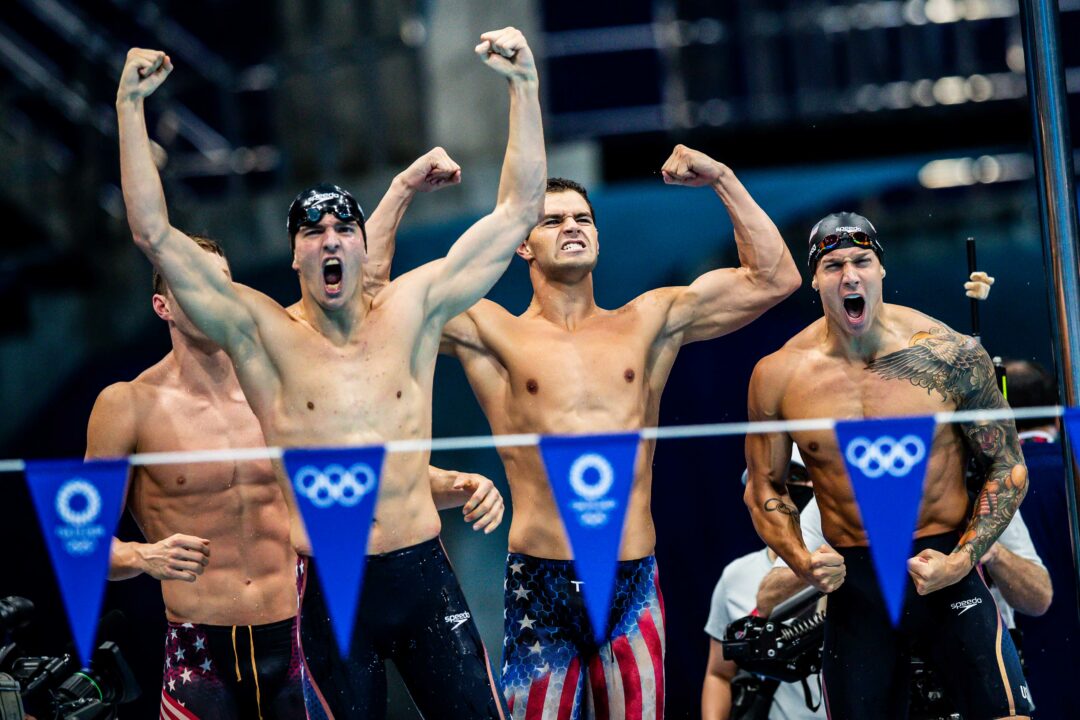 Since the supersuit ban in 2010, no men's relay had broken a long course world record in swimming... until last week's Tokyo Olympic Games. Current photo via Jack Spitser/Spitser Photography

When FINA outlawed buoyant, full-body racing swim suits in 2010, fans and observers feared that the record books might stagnate, a set of suit-aided asterisks adorning the all-time lists for years.

By and large, that doomsday timeline didn’t come to pass. Within a year of the ban taking effect, several short course meters world records had fallen – a pair of IMs records to Ryan Lochte, both 4×200 free relay records to Russia’s men and China’s women.

But even as the world’s elite swimmers have slowly started to purge the world record books of super-suited swims, one key barrier still remained.

Heading into the Tokyo 2020 Olympics in July of 2021, none of the three men’s relay world records in long course meters had been broken in the 11 years since the suit ban. In most cases, the world hadn’t even approached those world records since the end of 2010:

That makes it all the more significant that, even coming out of the coronavirus pandemic, all three men’s relay winners at the Tokyo Olympics were the fastest swims since the suit ban. The headliner was the United States men’s 4×100 medley relay, which broke the suit ceiling by smashing the world record.

The British 4×200 free relay put a crack in the dam early in the meet, coming within .03 of a world record relay that included super-suited Michael Phelps and Ryan Lochte in their athletic primes. Where both of those superstars split 1:44.4 (Phelps on a leadoff; Lochte on the anchor leg), the Brits held serve with a 1:44.4 from James Guy and a 1:43.4 from Duncan Scott, though the relay fell just short of the world record.

On the final night of competition, though, the U.S. cracked the super-suit relay barrier wide open.

The U.S. team did it, amazingly, by outsplitting a supersuited, 24-year-old Michael Phelps by seven-tenths of a second. That was courtesy of new star Caeleb Dressel, who split 49.0 for the fastest split in the history of the sport on butterfly. Michael Andrew was the other swimmer to outsplit his 2009 counterpart, going 58.49 to sneak under Eric Shanteau‘s split.

See you all in three years at Paris. Until then not many in the general sports media will follow swimming. Thanks for good info.

Unless MA changes coaches and his training regimen, this will be his only world record and he will not make another Olympic team. He definitely has faster swims in him, but without proper training he will continue to flounder at the end of his races. He needs a solid weight and dryland routine to give him power. He needs more than one hour workouts and surfing as cross training to get him through the final 25 meters in his 200IM. He also needs to work on his strokes. His freestyle is just ugly and his breaststroke kick is too wide for 50 and 100. It should be a tad narrower to allow for a quicker turnover. But since he is… Read more »

Worth noting that the WR Sun broke was done in a textile. Hackett’s 14:34.56 (the previous record) was from WC 2001 and was the only men’s LCM WR to survive the supersuit era.

Just think, if the prelims squad swam half a second slower, we wouldn’t be reading about the WR. We’d be reading about how the coaches blew another lineup, and USA finished in 9th place by chasing participation medals.

I get your point, though that kind of finish would hardly be fairly blamed on the coaches when the U.S. has been swimming second-place finishers in the prelims for only about, oh, six decades now. That failure would have totally been on the shoulders of the prelim swimmers.

Well you can fault the coaches for swimming Pieroni in the prelims even though Becker outsplit him in both the prelims and finals of the 400 free relay.

The other two relay records have the chance to be broken only if every leg swims well. For GB in the 4×2 I would say that they have some breathing room from a possible monster split from Scott.

On the subject of textile vs supersuit world records, every time I see Paul Biedermann’s 400m freestyle WR of 3:40.07 it annoys me knowing that it’s only one single millisecond faster than Thorpe’s time from 2002, knowing that Biedermann never cracked 3:44 in textile, knowing that Thorpe took it easy during his swim because he was a mile ahead and had other races to come later that session. If things had gone a tiny bit differently it could have been one of those records that transcends sport, a bit like Beamon’s long jump.

It was done in a super suit.

A millisecond is a one-thousandth of a second. Pedantic, but I can’t help it sometimes.

Probably helped that they had an empty lane beside them

He’s talking about in the 4×200 relay where Dean was around a second slower than his individual swim and the brits missed the world record by a few hundredths. But he still is not to blame, fantastic swimmer and they wouldn’t have been close without him.

stop being right? why?

At the 2009 Worlds in Rome, Phelps was also about a second and a half slower than his individual swim that same meet. Woulda, coulda, shoulda.